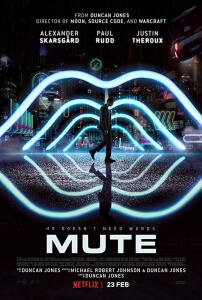 BASICALLY…: A mute bartender (Skarsgård) searches for his missing girlfriend in futuristic Berlin, and comes across two American surgeons (Rudd and Theroux) who may be vital to solving the mystery…

His first two features, Moon and Source Code, helped introduce him as a potential new voice in cinema that’s vastly ambitious in both visual and storytelling formats. But for his two follow-up features, the frightfully dull video game adaptation Warcraft: The Beginning and now the extraordinarily misguided straight-to-Netflix outing Mute, Duncan Jones has failed to recapture any of the magic he managed to conjure up the first couple of times, and if he continues down this dark path of undistinguishable messes, then his career won’t reflect that of Steven Spielberg, but more that of M. Night Shyamalan.

The film is set in the same futuristic universe as Moon, which is pointed out through news footage with Sam Rockwell’s character(s) from that movie popping up, and whatever plot line is going on with his character is vastly more interesting than anything that is actually happening in this one. Taking place in the seedy underworld of Berlin that looks like if Blade Runner was being spoofed on Futurama, the film is about Leo (Alexander Skarsgård), a man who was rendered mute as a child thanks to a boating accident, and was never given proper surgery because of his family’s Amish beliefs – incidentally, the fact that he is Amish yet exists in this very technology-based environment is almost never brought up in the movie, so it makes about as much sense as the rest of the movie. Anyway, he’s now working as a bartender in a nightclub that features robot strippers (oddly not the weirdest thing in this film), and is in a relationship with the beautiful Naadirah (Seyneb Saleh), but one morning he finds that she is suddenly gone, and heads out on a one-man mission to locate her that serves as his arc for the movie.

Of the many sleazy and monstrous figures he runs into, a couple of them stand out, and not in a good way; two Americans, who go by Cactus Bill (Paul Rudd, with facial hair that outdoes even Brian Fantana) and Duck (Justin Theroux), who serve as surgeons for people on the black market. They are crucial to the plot, but also represent what is largely wrong with this movie. For starters, both of them are vile and unpleasant bullies that seem to get off on the misery of others, but try to balance out their horrendous personalities with what Jones feels are humanising elements, for instance Cactus caring for his young daughter, and Duck being a paedophile. Oh, I’m sorry, did I just drop that little bit of information on you? Well, now you know how it feels when the movie does that; yes, it turns out that Justin Theroux’s character is unquestionably attracted to younger girls, and he’s not even being subtle about it either, leering around school-age girls like he’s a millionaire at a whorehouse, all with the hair and glasses of Jeffrey Dahmer. The fact that he is almost never confronted about it, aside from one scene between him and Rudd’s character but that’s really all there is, and not even punished directly because of it, exposes the shocking black heart of this movie, as it is filled with just as nasty supporting characters in this increasingly ugly environment that you really don’t feel comfortable being around, no matter how pretty the neon-drenched visuals can be.

Paradoxically, however, as vile and repugnant as Rudd and Theroux’s characters are, they are significantly more interesting than the guy who is supposed to be our lead in this. Skarsgård can be an intense and often compelling actor – anyone who has seen him in Big Little Lies can attest to that – but he has never been one for saying much with just the limited expressions on his face, and unfortunately when you take away his ability to speak and force him to act solely with just his vacant and emotionless eyes, he can be as bland as wallpaper which his character is very much so here. Leo is such a dull and unengaging person that you’d want to have the two American douchebags as the main characters instead, and lest we forget one of them is a not-so-subtle paedophile. Nothing about this guy is worth centring an entire movie around, but again Jones doesn’t seem to understand the limitations of taking away the ability to speak from a character we should really know a whole lot more about. That’s not to say movies can’t be made with mute lead characters – hell, look at The Shape of Water as an example of that – but you have to give them more personality other than the fact that they can’t speak, and sadly Jones forces us to watch someone with zero weight to him as the lead in this rather unpleasant little movie where the paedophile is a far more compelling character.

Jones can’t be faulted for the visual ambition, even though it’s shot and edited – appropriately enough – like a movie you’d find on Netflix, but not even that can distract from how this film is a colossal mess, one that does little favours for a director who’s just coming off of a pretty gigantic bomb with Warcraft: The Beginning, and who can’t even seem to catch a break with this much smaller movie by comparison. That doesn’t, however, mean that the project is any better; this is a far less appealing and nastier movie that not even the son of David Bowie could squeeze some life into, and hopefully his next project will be one that reminds us of why we liked his stuff in the first place, because he is really not doing a good job at maintaining any of that right now.

Mute is a particularly unpleasant and black-hearted sci-fi thriller that fails to recapture the spirit of Duncan Jones’ debut film Moon (with which this shares the same universe), largely due to a vastly bland and dull lead character and a roster of nasty supporting characters, one of whom is a paedophile that never seems to be directly punished for his crimes.