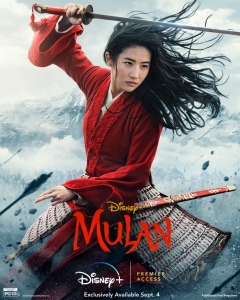 BASICALLY…: When her ailing father (Ma) is conscripted into the Chinese army, Hua Mulan (Yifei) disguises herself as a man to take his place…

Much has been said about the live-action remakes of Disney’s most cherished animated classics, from their creative bankruptcy to the fact that they cannot hold a candle to the original movies they’re based on, but one thing you can’t take away from even the worst of them is that they are best seen on the biggest screen possible. Say what you will about the shot-by-shot, line-by-line approach taken by do-overs of The Lion King, Aladdin and Beauty and the Beast, but they each have their own production qualities that a big screen was made for; whether it’s the visual effects or the sets or the cinematography, these films – as cynical as they may be – scream out for a visually pleasing theatrical experience.

Unfortunately, fate has forced their latest live-action take on Mulan to play its hand, foregoing its planned theatrical distribution in favour of a Disney+ release, which is a shame because not only is this one perhaps the most visually pleasing of the lot, and fully deserving of the complete big-screen experience which now isn’t going to happen, but it’s up there with The Jungle Book among the top tier of these remakes, since it both tells its own version of the story without relying too heavily on nostalgia for the animated original, and gets by as an entertaining action epic on its own terms.

The film hones in on Hua Mulan (Liu Yifei), the daughter of elderly veteran Hua Zhou (Tzi Ma) who, like most men in Ancient China, desires his daughter to bring honour to the family through marriage. However, when the Imperial Army calls upon each family to send one man to fight a clan of Northern invaders, Hua Zhou volunteers despite his ailing health. Desperate to spare her father from his inevitable fate, she dons his armour and rides off in his stead, disguising herself as a man and training amongst the other soldiers to fight off vengeful Rouran warrior Bori Khan (Jason Scott Lee), who has allied himself with powerful witch Xian Lang (Gong Li) to claim revenge against the Emperor (Jet Li) who killed his father.

I should state, for the record, that Disney’s original animated version of Mulan is not something I hold as close to my heart as some of the other Disney movies. It’s a fine movie, and I have fond memories of the musical numbers and Eddie Murphy as the dragon Mushu (none of which, by the way, are in this version), but in terms of nostalgia I don’t have that strong a connection as I do to, say, The Lion King or Beauty and the Beast. Perhaps that lack of connection helped me enjoy this movie more, because I could look at it on its own terms without constantly comparing it to the original, although there are a couple of links this movie makes which are impossible to ignore (namely a couple of music cues, as well as the odd bit of dialogue now and then, and a late cameo by one of the original’s stars).

Nonetheless, I was appreciating the fact that this movie, and its director Niki Caro, was more or less doing its own take on the material, introducing some new crowd-pleasing elements such as gorgeous fight choreography that incorporates classic martial-arts movie tricks like gravity-defying flips and kicks via the use of wires, like it’s Crouching Tiger, Hidden Mushu all of a sudden. These fight scenes are so beautifully filmed, and well-choreographed to ensure the audience can see and feel each and every impact, that it’s hard not to feel just a little bit pumped up when you see the titular character head into battle and use her physical and mental skills to outwit the enemy, not to mention Yiu Lifei’s spirited lead performance which gives you all the more reason to care about everything. It is an extremely well-crafted movie, with colours popping from each corner of the frame, and some very impressive action sequences firmly holding your attention, whether you’re a fan of the original or not.

That isn’t to say it’s a perfect movie, because let’s face it, even the best of these Disney remakes have some level of flaws to them. In this case, parts of the script leave certain plot strands and characters noticeably underdeveloped, from a potential romance between Mulan and another, not that interesting soldier, to the admittedly weak villain’s motivations for invading China. Don’t expect a lot of emotional depth in this movie, either; it’s a straightforward movie about being true to oneself and being brave enough to inspire others, and it does fine as that, but if you’re actively seeking an emotional connection as you may have made with the original animated version, then chances are you’ll come up short here.

Look, I know there’s a lot of people out there who cringe at the very idea of Disney remaking one of their animated classics, and most of the time they have very good reason to be negative about them, but one person’s negativity should not discourage anyone else from watching and enjoying them if they want to. If you want to watch this movie and enjoy it as much as you may have done the original, that’s just as okay as watching it and not liking it as much as the previous one; the point is, your opinion is the most important one to you, and no-one else’s, not even mine. My job is simply to convey what I feel about a movie, and I so happen to think this is a fine movie on its own terms; not perfect by any means, but an entertaining epic that most people can watch without difficulty, though one laments the lost opportunity to screen it in cinemas like it should have been from the very beginning.

Mulan is one of the stronger Disney live-action remakes, for its ability to work as an entertaining epic in its own right with very few ties to the beloved animated original, and despite some script flaws it serves as a visually stunning spectacle with beautiful fight choreography that’s hard to not be impressed by.

Want to decide what the movie’s like for yourself?
Check out Mulan streaming links
via