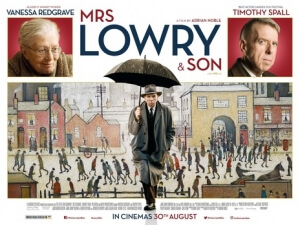 BASICALLY…: British artist L.S. Lowry (Spall) is repeatedly discouraged from his lifelong passion of painting by his opinionated mother (Redgrave)…

This is not the first time that Timothy Spall has portrayed a beloved British painter on the big screen, after his award-winning turn in Mike Leigh’s biopic of J.M.W. Turner, but Mrs. Lowry and Son – in which he embodies the part of L.S. Lowry – is the first instance where, unlike Mr. Turner, he is too good for the material he has been given. So, too, is Vanessa Redgrave, another great performer who hasn’t been in a whole lot of movies lately but deserves a lot better than this film, which sees both actors try their hardest to make this extraordinarily dull script digestible, but they only make this an even weirder sit.

The film is set in 1934 Lancashire, where artist L.S. Lowry (Spall) lives with and cares for his ailing and mostly bed-bound mother (Redgrave). He is struggling to get his work off the ground, and has to deal with some harsh critics – but none are more venomous and spiteful than his own mother, who thinks that her son’s paintings are a complete waste of time and that he should find something else to do with his life. Despite her rather horrid criticisms – and we shall discuss this character shortly – Lowry still holds high optimism that his paintings will find an audience, and that his mother will finally accept him for what he is.

On the surface, this sounds like it could be a wholesome chamber piece – the majority of the film is set in Mrs. Lowry’s bedroom – with two great British actors working off each other well, but the movie is a strange, strange beast. It feels like something that should not have been seen on the big screen, with a one-off slot on BBC Two being far more appropriate, seeing how the production values – from the reused sets to the way it just starts right after the first distribution logo – and wildly unambitious script undeniably scream “made-for-television.” However, even if it was something that aired on TV instead of going straight to the cinema, it couldn’t escape its theatrical roots even if it tried; the movie is based on a play by Martyn Hesford who also wrote the script, and on top of that the film is directed by Adrian Noble, a prominent theatre director making his feature debut here, and by God you can tell that theatre people made this. The way that it’s framed, structured, and especially written has all the hallmarks of a typical duologue piece, with both Spall and Redgrave performing as though there’s a packed audience watching them in London’s West End, and the sets themselves having a very miniscule quality to them. It probably works fine if you’re watching it as a play, but as a movie it’s so odd because they have different rules to abide by when it comes to their structure and pacing, and here it appears that Hesford was perhaps a bit too literal in adapting his play, because scenes will just suddenly end or cut to the next day without any hint of time passing. Again, that’s fine if you’re seeing this performed on the stage, but it just doesn’t work when you have this clearly theatrical material in front of a camera.

On top of that, it’s just not a very good piece of writing. To say that nothing happens in this movie would be an understatement, with the biggest conflict in the movie coming from whether or not Lowry should enter one of his paintings into an exhibition. Neither Spall or Redgrave’s characters are developed, as they stay the same at the end of the film as they do at the start with little or no growth in between, and they’re not written to be interesting enough as they are for you to even care. Take the Redgrave character, for example; if this were a much more layered script that actually dove deeper into the central figures’ backgrounds and personalities, then she would have perhaps come across as sympathetic even with all the rather damaging stuff she’s saying to her son, but because the script asks us to take everything at face value she comes across as an absolute monster with little to no depth to her cruelty. The character is written as so bipolar that she will be heavily critical in one scene and then be happy and jolly in the next (I should point out that I don’t know much about these people in real-life, so if she was actually bipolar then it perhaps makes a bit more sense, but even if she was, would you even be able to tell from the way this script is written?), with no sense of growth in between so it just seems like she’s just made this very unrealistic emotional leap in the course of mere hours. Spall, meanwhile, is disappointingly given very little to work with despite playing someone as revered as L.S. Lowry, with his lines mainly consisting of repeating the same phrases over and over again, whenever he isn’t grunting about as much as he did in Mr. Turner.

Sitting through this movie was a strange experience, as it really felt like I should be either watching this in the comfort of my living room sofa while this plays on BBC iPlayer, or in a theatre having paid an extortionate amount just for a decent seat, instead of a cinema. Either one of those experiences – well, maybe not the theatre one, because I still want to have money after seeing this be performed – would have been more fitting for this film, which as a movie is an uneventful bore, with underdeveloped drama and characters, an odd structure that does not work in a feature-film format, and cheapness to it that would be miniscule even for a TV movie (there’s a shot of fire in this movie that’s so poorly-rendered that it looks like they were loaned effects from an Asylum film). L.S. Lowry may have been a creative genius, but he deserves far better than this uncreative dreck.

Mrs. Lowry and Son is an uneventful, unambitious and wholly unremarkable chamber piece that cannot escape its theatrical roots, nor does it feel like it belongs in a cinema, with a one-off television slot being more than appropriate.

Want to decide what the movie’s like for yourself?
Check out Mrs. Lowry and Son showtimes in London
via