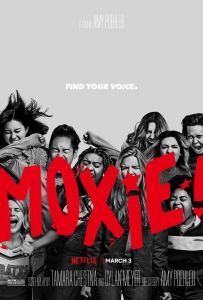 BASICALLY…: Inspired by her mother’s (Poehler) rebellious past, a shy teen (Robinson) publishes a zine which ignites a fierce revolution at her school…

When she signed on to direct Moxie – marking only her second directing gig following her 2019 debut Wine Country – Amy Poehler clearly had hopeful ambitions to replicate the success of her bestie Tina Fey and her script for the teen cult classic Mean Girls.

However, despite her great capabilities as a comedic performer, Poehler is unfortunately able to replicate neither the humour nor the sharp satirical bite of Fey’s endlessly-quotable film, which a concept such as Moxie sorely needed if it were to be even half as invigorative or smart as that movie.

In Poehler’s noble but ultimately mediocre attempt to speak to today’s oppressed and pro-active youth, the main character is Vivian (Hadley Robinson), a shy teenager who attends a high school where her female peers are unashamedly categorised by chauvinist jocks and uncaring teachers. Sick of the toxic status quo, and inspired by both her mother Lisa’s (Poehler) rebellious youth and the arrival of outspoken new student Lucy (Alycia Pascual-Peña), Vivian anonymously publishes a feminist zine called Moxie, which soon catches the eye of some of the school’s oppressed female students, and sets about a wave of activism that changes the way that the school and its students view femininity.

It should be explicitly noted that Poehler did not write the script for this film – that honour fell to duo Tamara Chestna and Dylan Meyer, adapting from Jennifer Mathieu’s YA novel of the same name – which perhaps explains why it doesn’t seem to be able to have much of her comedic prowess, nor any for that matter. This is a strangely humour-lite film, where a lot of the jokes really don’t land and the ones that come closest aren’t able to elicit a strong enough reaction, with even Poehler’s direction feeling a little stilted and awkward. The script clearly aims for something satirical, specifically towards both the patriarchal systems of high school and the “woke” social activist movements within Gen Z, but as a satire it doesn’t go nearly far enough in its message nor its ambition, and there’s far too much of a glossy tinge to this supposedly realistic high school that fails to ground it in any reality outside of its own (the main character’s love interest, a nice skateboarder guy who’s very supportive of the cause, feels like a complete fantastical construct that the writers far too generously envision a teen boy of that particular age to be).

For all of its talk about giving oppressed women a chance to let their voices be heard, the film seems reluctant to dive into any real issues that actual young women have to face, nor give many of the actual female characters much of a personality outside of being avatars for provocative feminist statements. It’s not until the final fifteen minutes that somebody reveals they had been raped, a revelation that really should have entered the game much sooner rather than leaving it all to unpack in the last act, and even then the victim and her story are largely side-lined so that it can focus on the more prominent characters. Because of that, Moxie ironically comes off as somewhat shallow in its approach to such a wide range of inclusive topics; it’s far more focused on the chumminess and free-spiritedness of the main character and her new friends rather than dealing with any of the actual problems they’re apparently denouncing.

There are nice things to say about the film; the acting is fine amongst these young actors, including Hadley Robinson who certainly fits the part of the shy but sweet lead character, and it mercifully doesn’t do what the 2019 Black Christmas remake did and adopt a completely mean-spirited approach to anything and everything that isn’t progressive (the film even has the dignity to point out and condemn those that do take on that aggressive attitude). However, as a Gen Z satire of social activism, it falls disappointingly flat, especially when it contains neither the humour nor the ambition to carry itself as far as it needs to; and as an overall film, it’s not among the worst of its kind, but it’s definitely a forgettable entry.

If you want to watch something that actually does have things to say about the toxic world of modern high school and its many inclusive characters, in addition to actually being shocking and three-dimensional, watch the TV series Euphoria instead – or, more appropriately, Mean Girls; it’s not only funnier and more entertaining, but Amy Poehler’s in that one too, supported by much better material than even her own.

Moxie fails to fully capture the woke Gen Z feminist movement in either an endearing or satirical way, squandering its potential with a shallow and mostly laugh-free script that merely skims the surface when it comes to the problems young women have to face in society.

Moxie is now available on Netflix.