Mowgli: Legend of the Jungle (Review)

Mowgli: Legend of the Jungle (Review) 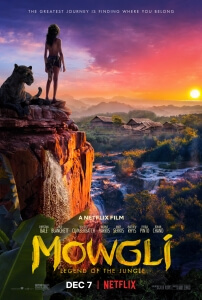 BASICALLY…: Young Mowgli (Chand) is raised in the jungle under the watch and tutelage of several animals including Baloo the bear (Serkis) and Bagheera the panther (Bale), but is also targeted by the fierce tiger Shere Khan (Cumberbatch)…

While Disney’s live-action remake of The Jungle Book impressed most critics and audiences, loyalists of the original Rudyard Kipling source material felt let down by its more light-hearted and family-friendly tone, which they felt was in betrayal to the original book’s darker and more adult nature. Those people, hence, kept their hopes up for Andy Serkis’ take on the material, which was originally scheduled for a late 2016 release, only for it to be heavily delayed in part to keep it as far away from Disney’s version as possible, until eventually Warner Bros sold off distribution rights to Netflix earlier this year (after they had released a theatrical trailer for it), probably because they smelled a financial disaster from miles away.

With its slightly troublesome production history – keep in mind, it began filming in early 2015 and is only now being released to audiences – you’d think that director Serkis would have made Mowgli: Legend of the Jungle worth the wait. Visually, it is; but in most other aspects, this one doesn’t come as close to bringing the story to as much life as even the recent Disney version did.

Using motion-capture effects via his production company The Imaginarium, Serkis re-tells the story of young man-cub Mowgli (a live-action Rihan Chand), who is raised by wolves in the Indian jungle when his parents are murdered by the fearsome tiger Shere Khan (voice and mo-capped by Benedict Cumberbatch). The young boy is taught the laws of the jungle by his teachers, including the panther Bagheera (Chistian Bale) and the sloth bear Baloo (Serkis), but struggles to become the wolf he aspires to be when his human skills begin to come into play. However, with Shere Khan on the move and ready to strike and kill the man-cub at any notice, Mowgli must find his place in the jungle if he is to become its protector, not just from Shere Khan but also from man itself.

As someone who greatly enjoyed the recent Disney version of this story, I’ll admit that I was kind of interested to see what Serkis would do by making it closer to its darker and more adult roots. It’s a ballsy move, making a more grown-up version of The Jungle Book so soon after the other one, but outside of some impressive cinematography there’s unfortunately not much else that Serkis can bring to this story other than to give it a much grittier look and feel to it. From what I understand, this adaptation is more like how Rudyard Kipling originally wrote the stories, which is an understandable notion, especially after the more family-friendly Disney version; however, by maintaining such a dour and harsh tone all throughout – this is a world where characters can be easily killed at any moment, or at the very least grazed or badly injured – there is no sense of enjoyment or wonder to this vastly digital world. Sure, the Disney versions of The Jungle Book weren’t exactly the most faithful of adaptations, but they at least gave a warmer and more approachable vibe that most audiences can enjoy; there’s nothing to this version that suggests that any audience would actively want to return here, because any kid who watches this will be upset by some of the graphic depictions of violence – there’s a late reveal of a kid-friendly character’s fate that will make young children have nightmares – and any adult will find it a mostly dull CG spectacle which comes up short in entertainment value next to Disney’s live-action version.

You can tell that there is ambition behind this project, and if anything it shows in the impressive visuals (but not so much the effects, which we’ll get to shortly) but Serkis is working from a script that makes nothing but concessions to be more faithful to the source material, but in exchange loses any sense of actual enjoyment the audience can get from it. The story seems to go by very slowly, and because there’s not a lot that’s going on which can be considered genuinely captivating it becomes quite the bore very slowly; there’s a scene in the movie that feels like it’s all about to wrap up, but when I checked the running time I was shocked that there was still 40 minutes to go. I just wasn’t all that interested in this story, because while I appreciate that Serkis was trying to tell a very different version of The Jungle Book, it never grabbed me or entertained me as Disney managed to do on two separate occasions, and I was left feeling mostly bored during it, to a point where I was checking my phone more regularly than watching the actual movie (and before you scold me for using my phone during a movie, 1) it’s on Netflix and I was watching it in the comfort of my home, and 2) checking for any updates on the ongoing Brexit disaster was something I found way more fascinating than the film I was watching).

As for the effects, there’s no doubt that Serkis has revolutionised the art of motion-capture over the years, and I appreciate that he was probably working with a far lesser budget than Disney was able to give their recent live-action version, but I really didn’t like the effects work here at all. Say what you will about the Disney film, but the effects in that were absolutely astonishing and incredibly lifelike (fully deserving of the Oscar for Visual Effects in my opinion), making it look like these animals really were there even though we all know they weren’t; I cannot for the life of me say the same thing about the effects in here, which look ridiculously cartoonish half the time and never once feel like they’re right there interacting with this live-action young boy playing Mowgli. They pull you out of the movie every single time there is a dramatic moment, because you’re so unconvinced by these effects and some of the voices that are given to them – Christian Bale sounds like he’s constantly out of breath all the time as Bagheera, while Serkis himself treats his rendition of Baloo like an Essex-native drill army sergeant, both of which just sound incredibly odd coming from these kinds of characters – that any genuine emotion is immediately squandered. You could genuinely put this next to the live-action Disney film and ask people to point out which one comes from the studio best known for cartoons, and odds are they’ll believe that this one, with how fake and haphazardly designed some of the animal characters are, is the one that comes from Disney.

Though I appreciate what they were trying to do here, I’m afraid that this new version of a classic story doesn’t hold a candle to the version(s) that ironically aren’t are faithful to the source material.

Mowgli: Legend of the Jungle is an ambitious attempt to tell a darker version of The Jungle Book, but it comes up short in actual entertainment value and even its effects work when compared to the more enjoyable Disney version from a couple of years ago.