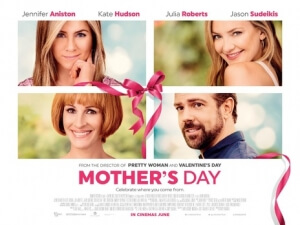 BASICALLY…: Several people, including a divorced mother (Aniston), a young woman (Robertson) looking for her biological mother (Roberts), and a bereaved father (Sudeikis), all celebrate Mother’s Day in their own unique ways…

Garry Marshall clearly must have been a fan of Love Actually when it first came out. The director of Pretty Woman, Beaches, Runaway Bride and The Princess Diaries – who, by the way, is still going strong at age 81 – must have obviously adored Richard Curtis’ ensemble romantic-comedy set around a specific holiday in the calendar year (in that film’s instance, it was Christmas) so much, that he’s made not one, not two, but now THREE films trying to capitalise on that film’s ongoing popularity. So far, he’s given us different interpretations of that film set during Valentine’s Day and New Year’s Eve in, erm, Valentine’s Day and New Year’s Eve, and now it’s time for Mother’s Day to get its fair share of the madness.

Yet, throughout all of these films, Marshall may have understood the appeal of a starry ensemble cast and a setting around a particular calendar holiday, but he’s always neglected the one key element that made Love Actually, against all odds, work: a soul.

Like Valentine’s Day and New Year’s Eve before it, Mother’s Day lacks the spiritual and even heart-warming qualities that Curtis put into his film, and even though Love Actually can be rather cheesy it still had a warm centre to it that was actually rather endearing for even the coldest of patrons, something that Mother’s Day and its predecessors are utterly missing entirely. Instead, it comes across as a cheap, vapid and downright cynical product that seems to only exist as that last-minute gift you pick up for your mother from the bargain bin at the local pharmacy, and is just about as half-assed in the execution.

It’s pointless trying to go into each and every plot since, like Marshall’s previous films, there are far too many to count or even summarise in the short amount of space we have in this review. Just know that the film covers many different kind of scenarios which all in some way involve mothers, even when they’re sometimes not even part of the bigger picture; among them are divorced mothers like Jennifer Aniston’s Sandy, fathers acting as mothers in the wake of the actual mother’s passing not far from the likes of Jason Sudeikis’ Bradley, young mothers not unlike Britt Robertson’s Kristin, two sisters who are mothers who must deal with their bigoted redneck stereotype mother (Kate Hudson and Sarah Chalke as the sisters, Margo Martindale as the mother), and career women who seemingly don’t have time to be mothers such as Julia Roberts’ Miranda. In case you’re at all wondering, these plotlines do indeed sometimes converge and crossover with each other, sometimes in very contrived and forced ways that sometimes don’t even make sense that these characters should be in contact with each other.

You know exactly what kind of film you’re getting into when it opens up with a very cheesy song about mothers playing on the soundtrack, and the film doesn’t let up on the blandness from that point onwards. These are all plotlines that are so thin and lazy that they would just barely make up several episodes of a particularly lame TV sitcom, one that even the likes of Full House would be yelling at to grow a pair of balls; they’re all so predictable and so contrived, not to mention all wrapped up within the space of roughly twenty minutes when you piece them all together from the film’s fragmented framing structure, that you’re just sitting there with your arms crossed and your face in a semi-permanent grumpy expression waiting for the hijinks to come to an end so you can move on to something you actually want to watch. None of them are engaging, funny or even enjoyable to watch, especially when it switches on to its more manipulative mode which makes you feel more uncomfortable rather than emotionally moved (Sudeikis’ late wife, for example and pointlessly played in archive footage by Jennifer Garner, was a US Marines combatant that was KIA, so whenever her grave is shown with Sudeikis’ young daughters crying over it, there’s solemn military music playing over it which is so painfully trying to cram in the memories of real-life fallen veterans that it can actually be a little insulting, especially when it’s being represented in a film as bad as this one).

Give the actors some credit though, because most of them are at least trying despite the horrible material, but even the likes of Jennifer Aniston and Julia Roberts can’t turn around a script this lazily written and hackneyed; they’re mostly just stuck there on-screen with nothing to do other than talk in awkward exposition dialogue setting up their character arcs for the rest of the film, or talking about nothing else other than how difficult and therapeutic being a mother can be. Nobody has any real conversations in this film, because the dialogue is made up of as many things that the writers can think of that can be instantly traced back to being about mothers; even a section of the film involving Jack Whitehall as a struggling stand-up comedian with terrible material that is somehow winning over an entire audience – yeah, that’s a real stretch – concludes with a sappy and sugary speech about motherhood, which is really no different than any of the other dozen speeches about the exact same thing over the entire film. None of it is enduring, because it’s so manufactured and processed that it just ends up having no soul, and even ends on a particularly lame joke that only seems to appease the kind of audience this movie seems to be preying upon.

The common trait throughout all of these films that Marshall has done, from Valentine’s Day to New Year’s Eve to now Mother’s Day, is that they all seem to think that Love Actually managed to get by because it has a huge ensemble cast and was set around a particular holiday, when in fact Richard Curtis gave it a warm and fuzzy feeling which, while certainly cheesy at times, had its heart in the right place. These rip-offs, Mother’s Day included, certainly do not; and while we can’t say that this is the worst out of all of them – after all, New Year’s Eve had a plot about two expectant mothers trying to force their babies into the world for just after midnight to win a large sum of money – it is definitely not something you want to give to the woman who brought you into this world.

Mother’s Day is a lazy, cynical and utterly soulless ensemble comedy that only exists to make money off the calendar holiday and nothing else, which falls right in line with Garry Marshall’s two previous attempts to poorly copy the Love Actually formula.