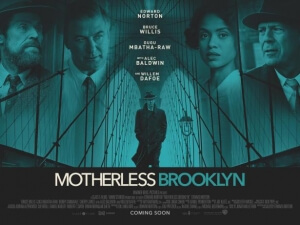 BASICALLY…: In 1950s New York, a private detective (Norton) sets out to solve the murder of his friend and mentor (Willis)…

Much like how Honey Boy was Shia LaBeouf’s baby through and through, Motherless Brooklyn is very much Edward Norton’s movie. The actor not only starred but also directed, wrote and produced the film, which he based on Jonathan Lethem’s book of the same name, and spent nearly twenty years developing before he finally made it, so to say that this is a passion project for Norton is quite the understatement.

However, whereas Honey Boy was a deep, complex and extremely personal vehicle for LaBeouf to show the world a side not many people had seen before, Motherless Brooklyn is a sluggish vanity project that only serves to make Norton look good while shoving everything else, from an engaging story to characters worth caring about, to the side.

Taking place in the 1950s – a departure from the book, which was set in more contemporary times – Norton plays Lionel Essrog, a New York private detective working for an agency run by his boss and mentor Frank Minna (Bruce Willis). Lionel has uncontrollable Tourette’s, as well as a photographic memory and a touch of OCD, and he looks up to Frank as a father figure having taken him and a few other orphans under his wing, so when Frank is suddenly killed during a botched investigation he is understandably eager to find those responsible and give them their due. As Lionel looks deeper into what Frank was investigating, he starts to uncover a web of corruption and abuse of power, involving virtually everything from gentrification to racial relations to something about a jazz club, all of which would make for a fascinating film noir, if the film was more exciting than it sounds.

Norton certainly has ideas with his film, some of them very ambitious, but he can’t seem to pick and choose one or two, instead deciding to do all of them at once. It leaves the film stuffed to the brim with various sub-plots, characters who just come and go, and twists which aren’t exactly twists because they’re spelled out for you so blatantly, and not much of it holds water because Norton doesn’t seem to be able to grasp so many things happening all at the same time, or at least doesn’t know how to portray all of them in a way that doesn’t leave his audience feeling completely and utterly lost. There were things about the plot that even I had to look up on the film’s Wikipedia page, because the film doesn’t do a particularly great job at making sure that every plot thread, no matter how loose, is respectfully explained. The fact that there is so much that’s going on in this film makes the film’s already lengthy runtime feel even longer; at just under two-and-a-half hours, it moves along at an incredibly slow pace when a plot such as this doesn’t even need to be this long in the first place, and it leaves you impatient when scenes will just go on and on with little end in sight. It moves so slow that even The Irishman feels like it’s quicker to sit through, and that movie was a full hour longer than this.

It doesn’t work as the kind of film noir that Norton is clearly aiming for with his film, because the cinematography – while pretty at times – doesn’t match the gritty tone that the plot is suggesting; it’s far too clean and polished to appear otherwise. It’s like if you were to shoot Chinatown with the colour-grading and crisp imagery of, say, Bridesmaids, which might seem random to you but the way that it is lit and sometimes staged makes it look like one of Paul Feig’s movies which just happened to take a far more serious attitude. It is also laced with a smooth trumpet-led jazz score by Daniel Pemberton which, while decent enough, seems like a stereotype of every detective movie soundtrack ever, complete with monotone voiceover narration by Norton which seems to have been read with the same amount of enthusiasm as Harrison Ford’s infamous narration for Blade Runner. As for Norton himself, his performance is good and he does his best with the material he has been given (by himself), but it’s one of those showy performances that demands your full attention with every tic and outrageous phrase he shouts out, leaving little room for other strong actors like Willis, Gugu Mbatha-Raw, Willem Dafoe and Bobby Cannavale to make much of an impression; the only one that comes closest to stealing the film from Norton is Alec Baldwin, who is having fun as the very Trumpian villain at the centre of everything.

Though one admires the guts for someone like Norton to make a film that has lots of intriguing ideas and on this scale, the end result goes nowhere with any of them, ultimately serving as a tool to further show the world that Edward Norton is, indeed, a very versatile actor who can make a film every now and then (his last directorial outing was Keeping The Faith, all the way back in 2000), instead of being anything that’s worth even begin considered substantial. There is no denying that Norton is a very good actor, but if he’s going to make himself a vanity project then he has to at least give the audience something to care about, instead of just having it constantly be The Edward Norton Show and not the hard-hitting crime drama that it probably could have been, had he not let his ego get in the way of creativity.

Motherless Brooklyn is less of a compelling film noir and more of a sluggish vanity project for writer/director/producer/star Edward Norton, who delivers a showy performance that leaves other with less to work with, and conveying way too many plots and thin characters for us to really care about anything, making the overlong running time of just under two-and-a-half hours feel so much longer.

Want to decide what the movie’s like for yourself?
Check out Motherless Brooklyn showtimes in London
via