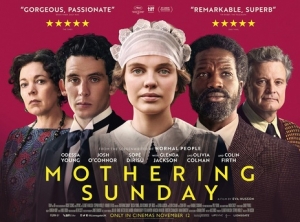 BASICALLY…: In 1924, a young maid (Young) spends the day with her secret lover (O’Connor)…

If there’s one type of British heritage movie that Mothering Sunday – the adaptation of Graham Swift’s acclaimed 2016 novel of the same name – desperately wants to be like, it’s the works of Ismail Merchant and James Ivory, known collectively as Merchant-Ivory. Director Eva Husson’s film certainly contains a lot of the hallmarks found in Merchant-Ivory movies like A Room with a View, The Remains of the Day and Howards End – historical setting in the stately British countryside, upper-middle to working-class protagonists, bright costumes worn by men and women alike – but, it has to be said, very little of the raw intimacy or emotion that those other films carried.

As in the novel, Mothering Sunday is set on the titular late-March day in 1924, focusing on a young woman named Jane Fairchild (Odessa Young) who serves as a maid to upper-class couple the Nivens (Colin Firth and Olivia Colman, both disappointingly underused). Despite their children being killed in the Great War, the Nivens still observe Mothering Sunday and give Jane the day off, which she decides to spend with her secret lover Paul (Josh O’Connor), the only surviving son of the Nivens’ close friends the Sheringhams (Craig Crosbie and Emily Woof). The reason that Jane and Paul’s relationship is secret is because Paul is due to marry very soon, to a woman named Emma (Emma D’Arcy) who is, in theory, a more appropriate match for the young man than lowly Jane is. From there, things happen… sort of.

The problem with Mothering Sunday is that, for all of its handsome qualities (sharp, intimate cinematography, costumes by legendary designer Sandy Powell etc), it’s rather dull to watch. Director Husson and writer Alice Birch (the latter known for writing the hit miniseries Normal People, as well as the script for Lady Macbeth) adapt Swift’s novel perhaps too closely, retaining the close intimacy but barely any of the emotion from the original story. The novel itself is apparently only 150 pages long, and yet I’d be willing to be that there is better urgency and more fleshed-out characterisations in the book than there are in the movie; things move very slowly here, made more noticeable by a largely inconsequential story where you ask yourself on multiple occasions what the point of it all is supposed to be, and characters who you ultimately simply don’t care about because they either lack definable personality traits or they simply share no real chemistry with each other. There’s not a moment where you find yourself invested in the main love story, because despite the noble efforts of Odessa Young and Josh O’Connor neither of their characters seem to show a real affection towards one another, with his mind being much more on his now-deceased brother and close friend than his lady lover, while she mostly lays around nude and meaningfully pouts towards something unseen off-screen.

Part of that, you could argue, could be down to the editing of this film, which is honestly where the biggest mistakes of this movie lie. The movie adopts a non-linear format, frequently cutting between the events of the titular Mothering Sunday, and moments that take place both before and after this fateful day; a method like this can certainly work, and has been proven to do so in the past, but here it just feels so random whenever it cuts back and forth, like you’re watching a Merchant-Ivory film on shuffle mode. It makes placing certain components of the story extremely difficult, because there is no immediate way to tell where and when we are exactly in this story; we’ll be focusing on our two chemistry-free lovers in bed one moment, and then we’ll suddenly be back to when they first meet each other, only then to cut right to Young’s Jane later in life when she’s involved with Ṣọpẹ Dìrísù as a philosopher. To a point, you can understand the need to switch things up when adapting a relatively thin book, but when there already doesn’t seem to have been much added to expand upon the original story, the constant shifting from one time period to another feels much more frustrating since it’s all you can focus on due to neither the story nor characters doing much to reel you in.

Ultimately, Mothering Sunday is an unfortunate disappointment that plays like a lesser imitation of a Merchant-Ivory production. You can understand the intentions of the filmmakers when adapting this well-received novel, but if there’s nothing to hook you in when it comes to story, characters or overall emotion, then the good intentions simply fall flat. Not even legendary Oscar-winner Glenda Jackson, who bookends the movie with a cameo that easily could have been cut from the whole movie, can bring some gravitas to a classy, but ultimately empty, period piece where, by the end, you’re much more invested in holding in the pee you’ve built up from the cinema drinks while watching it (apologies for the gross imagery, but I think you get my point).

Mothering Sunday is a disappointingly dull period drama that lacks the engagement and raw emotion of your average Merchant-Ivory production, lacking in both an engaging story (flimsily held together by frustrating non-linear editing) and interesting characters to properly expand upon Graham Swift’s acclaimed novel.

Mothering Sunday will be released in cinemas nationwide on Friday 12th November 2021 – click here to find a screening near you!