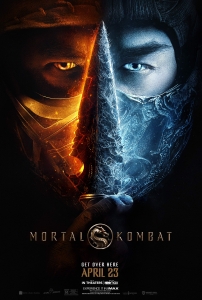 BASICALLY…: An MMA fighter (Tan) trains for a deadly tournament that will determine the fate of the universe…

As many of you will probably already know, this is not the first time that Mortal Kombat has been made into a major motion picture. The popular video game franchise, known for its gory battles and memorable characters like Sub-Zero and Johnny Cage, was previously adapted by director Paul W.S. Anderson (long before he dipped his feet into other video game properties like Resident Evil and the upcoming Monster Hunter) into a more consumer-friendly PG-13 rating, which naturally upset some fans hoping for an all-out display of violence as there was on the console.

And the less said about Mortal Kombat: Annihilation, the better. Except for this “classic” bit of dialogue:

The good news, though, is that Mortal Kombat circa 2021 is significantly better than THAT monstrosity, and also brings to life the uber-violent showdowns that fans of the original game have been wanting to see for years in a film adaptation. As for the rest of the movie, it’s an entertaining enough ride, but don’t expect to be completely wowed by some of its way more generic components.

This time directed by Simon McQuoid, making his feature debut under producer James Wan, this reboot of Mortal Kombat almost immediately throws you in to the mythology that will be way more familiar to hardcore fans than casual viewers (seeing how I never played any of the games, I’ll admit to being confused by a lot of what I’m about to attempt to describe). Basically, there appear to be multiple dimensions including Earthrealm (our world) and the more desolate Outworld, which occasionally duel in a tournament known as Mortal Kombat. Outworld has apparently beaten Earthrealm nine times in a row, and is on the cusp of a tenth, which will mean its ruler Shang Tsung (Chin Han) can take over and enslave the human race – however, a prophecy forewarns of a descendant of legendary ninja Hanzo Hasashi (Hiroyuki Sanada) who will emerge and defeat Shang Tsunug’s mighty warriors before they can do anything. That descendant turns out to be Cole Young (Lewis Tan), an MMA fighter who bears the mark of Earthrealm’s many champions, among them Special Forces operative Jax (Mehcad Brooks) and his partner Sonya Blade (Jessica McNamee), and must now train alongside them and other warriors including Liu Kang (Ludi Lin), Kung Lao (Max Huang) and mouthy Australian mercenary Kano (Josh Lawson), if he is to bring down Shang Tsung and his most deadly henchman, the ice-cold Sub-Zero (Joe Taslim).

To fans of the game, this plot with these many characters perhaps sounds like a dream come true. It’s definitely a busy movie, introducing fan-favourites left and right while also establishing the numerous worlds that apparently exist in this multiverse, but astonishingly it rarely ever becomes boring, even to those less familiar with Mortal Kombat. McQuoid rather confidently keeps the action consistently entertaining, especially as he dabbles in some pretty gory scenes that are suitably grotesque (if slightly marred by cheesy visual effects); this is the kind of movie where people get stabbed everywhere with swords, have their arms frozen off, their heads smashed in, their guts sliced open, and in one glorious moment chopped in half from the head down by a sharp frisbee hat. It definitely feels like this reboot is making up for lost time in the violence department, but it’s also sparing in how it uses the gore, spacing things out evenly enough with some fun supporting characters that carry a number of the less violent scenes; Joe Taslim as Sub-Zero makes for an intimidating villain, while Josh Lawson steals the entire movie as the boisterous Kano.

The movie’s got enough of these entertaining turns to make up for the very generic script that has been bestowed upon this reboot. It’s pointless to go after something like Mortal Kombat for not making sense, because in a movie where people just accept that other people can make icicles out of their bare hands and fire laser beams from their eyes, you have to assume that logic plays a minor role in the mechanics of this universe, but given the extremely formulaic “chosen one” plot it’s decided to run with, you’d think that they’d at least have the right mind to give its story a bit more of a kick, instead of following all of the familiar beats one by one. In a bold move, the titular tournament doesn’t actually occur at any point in the movie (presumably, they’re saving that for the likely sequel), which gives the writers more time trying to flesh out some of these characters and plot points, but it only makes us pine for such a tournament even more because, again, the story it gives us is rather stale in its current condition. The same goes for the lead character, Lewis Tan’s Cole Young (who, from what little I understand about the games, is an original character created specifically for this film); while Tan is a fine enough actor, the character is seriously lacking in any interesting features or definitive personality, especially compared to his much more colourful co-stars who are infinitely more deserving of the lead role than this guy.

In the much wider discussion of movies adapted from video games, Mortal Kombat circa 2021 is certainly one of the stronger to emerge in recent years. That isn’t to say that it’s a fantastic movie, which it isn’t, but given how it still manages to be entertaining with its action and plethora of supporting characters despite the weak plot and uninteresting lead, it might as well be a masterpiece next to movies like Super Mario Bros., Alone in the Dark and – yes – Mortal Kombat: Annihilation. Let’s just hope that the sequel to this won’t be as bad as that sequel was, although given the sheer entertainment factor here we might not need to worry.

Mortal Kombat is an entertaining big-screen reboot of the popular video game series, containing plenty of gore and fun supporting characters that rarely make it a dull watch, although its very generic plot and an uninteresting lead hero often bring it dangerously close to a full-on fatality.

Mortal Kombat is now available to rent or buy on digital platforms, including Amazon Prime Video.