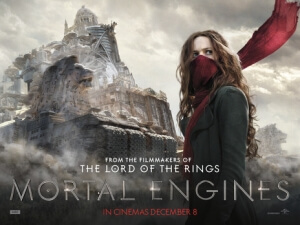 BASICALLY…: In a post-apocalyptic future where cities roam on wheels, a major conspiracy is unveiled by mysterious outsider Hester Shaw (Hilmar)…

Phillip Reeve, the author of the best-selling Mortal Engines Quartet series of books, has until now resisted the urge to let Hollywood turn his stories into feature-length films, presumably because he saw how hard the likes of Stormbreaker, The Golden Compass and The Mortal Instruments: City of Bones failed in their respective adaptations, and wanted to spare his books the same fate. But thanks to producer Peter Jackson – who also co-writes with fellow Lord of the Rings alumni Fran Walsh and Philippa Boyens – and debuting director Christian Rivers, the Mortal Engines series is now a budding film franchise, beginning with this first film based on Reeve’s first book in the quartet.

At first glance, it’s not exactly as destined for failure as The Golden Compass was, but unfortunately there’s still a lot of burdening problems this movie just can’t shake off to prove it has legs to carry on.

It is set in a world where, many years ago, unexplained cataclysmic events caused the end of the world as we know it, and to survive humanity has adapted their cities into giant vehicles that roam around what remains of the planet, with the larger cities such as London devouring smaller wheeled towns and consuming their resources for fuel. Hester Shaw (Hera Hilmar) is a young facially-scarred woman on board one of the small towns that is consumed by London, and she uses that opportunity to try and assassinate the powerful Thaddeus Valentine (Hugo Weaving), a figure from her past. However, she ends up being thwarted by young Londoner Tom Natsworthy (Robert Sheehan) but narrowly escapes the city, although she is followed by Tom after he is literally pushed out by Thaddeus after he starts asking questions about his connection to the young woman. Together, Hester and Tom must make their way across the ruins to safety and stop Thaddeus from executing a deadly plan to rule over all remaining life.

I have not read any of the books in this particular series, but luckily for this showing I was accompanied by someone who was very familiar with them, and had been excited to see this film ever since they first heard it was being made into a film. From their perspective, they thought that while some things had been drastically changed – which was to be expected, because most if not all adaptations alter things from the original source material to make it work in a film format– they enjoyed seeing this world come to life on the big screen, even though they agreed that the book is still superior. As someone who hasn’t read these books, I can understand the appeal; this is a cool-looking world filled with creative steampunk designs and some stunning CG scenery, and I enjoyed how dirty and grimy a lot of the tools and sets looked, like it was a world that was well and truly lived in. However, I can also see how the book is so much better, because there appears to be a lot that’s been lost in translation, such as the majority of these characters’ defining personalities, and a compelling enough reason to care about most of it. This movie is largely filled with exposition that details how this world works and what some people’s motivations are, but the film barely gives us enough time to let it all sink in – the opening sequence just throws us into this world without much warning – so despite all the information we still feel somewhat lost in the middle of all of it, with things just kind of happening without much in terms of context or build-up. It’s a world that you want to feel like you’re wandering about in, kind of like how Jackson managed to achieve with Middle-Earth, but it’s not as expertly laid out for us or even easy enough to understand.

I wouldn’t mind so much if this movie gave us characters we could understand and get behind, but again the film doesn’t manage to give us enough reasons to care about many of them, instead devoting time which should have gone to properly developing some of these people to loud and explosive action sequences that have more and more CGI splooge on them as they go by. To their credit, these actors are trying hard here – Hera Hilmar is decent as the designated lead of the film, while Robert Sheehan has a natural likeability to him that was also present in Bad Samaritan from earlier this year, and Hugo Weaving at least looks like he’s enjoying himself in yet another nefarious villain role – but if we got to know them more instead of just seeing them go through one extended action scene after another, we might actually get more behind their causes instead of following them only because we know they’re the heroes.

It feels very empty as a result, about as soulless as the frequent CGI that’s all over the film which doesn’t exactly make this world feel all the more real. By the end, you’re not interested enough to cheer for the heroes and jeer at the villains, because you never feel the weight of this world and its rich history, outside of an eye-rolling Minions gag that just screams of studio notes. I feel that this probably should have been adapted into an anime series, because the look and tone of this story does very much feel like something that Studio Ghibli could easily bring to life, kind of like this weird meshing of Star Wars, Mad Max: Fury Road and even their own Howl’s Moving Castle; which isn’t to say that something with the light artistic styling of an anime can’t be brought to live-action, but if it meant that this world and these characters are better expanded and made more compelling, then I’d take it over this ambitious but kind of messy attempt.

Mortal Engines is an ambitious attempt to bring Phillip Reeve’s book series to the screen, but its potential is squandered by clumsy world-building and a story and characters that aren’t defined enough for you to actually care about any of it.