Monster (Review) – A Devastating Look At An Unfair System 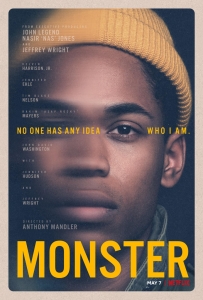 BASICALLY…: A young film student (Harrison Jr.) is accused of murder and placed on trial…

Even after last month’s monumental guilty verdict of Derek Chauvin, the white monster of a police officer whose murder of George Floyd sparked last year’s global Black Lives Matter protests, the American judicial system is still far from being completely fixed. The rates of African-American citizens being arrested and placed on trial for crimes they may or may not have committed are still abnormally high, and even worse they are already being judged by their peers long before the trial even begins, primarily because of the simple fact that they are black and fit the perceived criminal stereotype just by simple glance.

Director Anthony Mandler’s Monster, based on the novel by Walter Dean Myers, puts this grave misjustice on its own trial, in a drama that highlights the harsh system that clearly discriminates without ever once uttering a racial slur, and leaves you devastated by how the events and legal loopholes shown here are not so far removed from our own reality. It’s a tough watch, but powerful enough to put you in a very tight emotional spot as you see how the system is just out to get people like our main character, regardless of their innocence.

Said main character is Steve Harmon (Kelvin Harrison Jr.), a seventeen-year-old film student who comes from a middle-class New York family, is generally well-liked by his fellow students and teachers, and has strong aspirations to become a filmmaker with his own style and voice. However, when he is implicated in the robbery and murder of a local bodega owner, Steve is arrested and thrown into prison, awaiting trial that will determine his ultimate fate. From the offset, it seems that he is destined to meet an unfair verdict, simply because of the colour of his skin and the fact that he’s being charged with homicide – even the slimy prosecution lawyer (Paul Ben-Victor) says in an off-cuff remark that Steve “looks the part to me” – but as the trial progresses, Steve becomes more and more determined to show the jury, and the world, that he is not the monster who he is being framed as.

The movie is largely following the template of a traditional courtroom drama, with revelatory witnesses and lawyer statements all leading up to a dramatic reveal of the verdict, but whether or not you can predict the final outcome, there is always an uneasy feeling of doom hanging over the entire debacle. We, the audience, seem fairly certain that young, likeable Steve is wholly innocent of the crimes he’s been charged with, but hardly anyone else in the film seems to have come to that conclusion; you can see on the faces of the jury, the prosecution, the prison guards and so on that they know, just by looking at him, that this good-natured young lad is a complicit criminal even though he never pulled the trigger (he is being cited as a lookout for the actual perpetrators of the crime, but to some that’s all they need to know). The whole time, you feel just a wrenching notion in your gut that no matter what Jennifer Ehle’s defence lawyer tries to do to make her client look innocent, the system will work its dirty magic and send yet another innocent black man behind bars, which Mandler’s direction leads you to think via some disorienting quick-cut editing and tightly-wound close-up shots of the sheer devastation hitting poor Steve’s face like a powerful wave.

While Mandler does a good job of leaving you consistently on edge with your emotions, the overall script feels uneven, skimming some of the more important details in lieu of, ironically, presenting the truth at face value. While there is never a doubt that Steve, impressively played by up-and-coming actor Kelvin Harrison Jr., is far more than the monster he’s being portrayed as, there’s rarely a sense that there’s much else going for him underneath the surface; interactions with his family and school friends are kept to a minimum, while we mostly see how he familiarises himself with the streetwise player (played by rapper A$AP Rocky) who would become the other defendant in this case. Though we do get a fair share of moments that show Steve as a formidable young man caught in a horrific situation, there perhaps could have been some more time devoted to showing a few more of his personal attributes that could help the audience feel even more emotionally involved than we already are.

Despite the occasional wobble, Monster has enough powerful moments, portrayed by equally strong actors – beyond Harrison Jr., there are memorable appearances by character actors like Jennifer Hudson and Jeffrey Wright (as Steve’s parents), Tim Blake Nelson (as his teacher) and John David Washington (as a criminal with close ties to the case) – to give the viewer an emotional punch in the moment, all the way up to the final crescendo in this devastating, monstrous case of injustice.

Monster is often an emotionally devastating portrayal of injustice when it comes to the unfair presumptions made towards young black criminals, and is equally well-made and acted, even though the script occasionally feels uneven.

Monster is now available on Netflix.