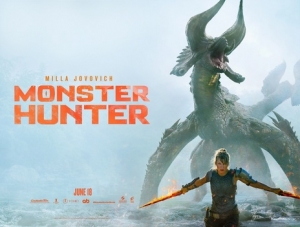 BASICALLY…: A group of soldiers are transported to a world overrun by enormous powerful creatures…

If you want a movie adaptation of a popular video game that offends few and leaves an impact on even fewer, the best person to call is Paul W.S. Anderson. After all, the director has made a career out of making sub-par film versions of games like Resident Evil and Mortal Kombat, and even the films he’s made that weren’t based on pre-existing games – such as Alien vs. Predator, Soldier and even Pompeii – he somehow managed to make them feel like you’re watching a video game play out in front of you.

Now, he’s bringing his reliable adaptation skills to Monster Hunter, the long-running Capcom series which to some (myself included) is perhaps a rather obscure franchise to turn into a major Hollywood blockbuster, but if Anderson has proved anything over the years, it’s that he isn’t one to be stopped once he puts his mind to it. So far, it doesn’t seem like it’s paid off, with the mixed reception it’s received from critics and the disappointing box office (so far, it’s made a meagre $42 million worldwide against its $60 million budget, which even for a pandemic-era release isn’t great), although in all honesty there are a couple of things about it which I do feel are worth talking about that prevent it from being a complete write-off.

The film, which Anderson both writes and directs, has such a simple plot that you can easily describe it in only two sentences. It begins as a team of soldiers – led by Captain Artemis (Milla Jovovich, Anderson’s real-life wife) – are suddenly transported to another dimension known as the New World, a desert realm that is completely overrun by giant monsters. Very quickly, Artemis’ team is wiped out, leaving her as the only survivor, but she soon comes across a fearless hunter (Tony Jaa) who teaches her about the best ways to vanquish her giant monstrous foes, and assists her on her quest to return back to her world. See? That’s two sentences, and not a thing out of place. It’s seriously that simple.

As easy as it is to describe, though, actually watching the movie is an entirely different concept. Anderson’s direction often makes a lot of the action incomprehensible, reducing entire sequences to rickety camera-work and quick-cut editing to avoid showing too much violence and keeping it at a brisk 12A/PG-13 rating (there are parts where people are impaled, thrown into solid objects and blown up, and not a drop of blood is ever spilled). For whatever reason, the volume levels also appear to have been turned all the way up, making the bombastic sounds of people screaming and firing guns seem far louder than it needs to be, to an almost headache-inducing level. On a script level, Anderson doesn’t even attempt to give us any backstory or defining characteristics for most of these people; you never learn anything about Milla Jovovich’s Artemis, so little in fact that until the final act I had no idea what her name even was, and even things about Tony Jaa’s character is left all too vague and ambiguous, so there’s very little reason to care about these people despite them doing all this action stuff.

By most accounts, Monster Hunter is a largely pedestrian action movie that’s marred by some questionable filmmaking, but there are times when you can clearly see a much better film – or at least, a slightly more tolerable one – trying to crawl its way through. The monster action itself (whenever you can actually see it) is not that bad, and they have some interesting designs that can be quite menacing at times, especially a horde of giant CGI spiders that terrorise the soldiers early on in the film. There is also a decent chemistry between Jovovich and Jaa, as they each try and show one another how things work in their worlds (for Jaa, it’s through training her with giant swords and wrist-operated crossbows; for Jovovich, it’s by introducing him to chocolate), all while working around their language barriers.

It is also a movie that is extremely, fascinatingly weird. There are some unexpected body horror moments in this film, almost to a similar level as Anderson’s own Event Horizon, where certain characters find themselves swarming with spider eggs before being eaten alive; such a thing I honestly never expected to see in something like Monster Hunter, but for the brief time it was there, it was welcomed. The world itself contains a number of bizarre add-ons which I can only assume make more sense in the games, whether it’s pirate ships floating across the dunes, or – in one of the biggest WTF moments for anyone unfamiliar with the source material – anthropomorphic CGI cat people that can cook like hibachi chefs.

Had the film embraced its utter weirdness, instead of succumbing to typical action movie dialogue and personality-free characterisation, Monster Hunter could well have been Paul W.S. Anderson’s most entertainingly bonkers movie yet. Instead, it’s just another in a long line of throwaway video game movies that he’s attached his name and even his own wife to.

Monster Hunter is an entirely throwaway video game adaptation that’s marred by incomprehensible direction and barebones writing, though you can see where it might have worked if it embraced its weirder elements.

Monster Hunter is now showing in cinemas nationwide – click here to find a screening near you!