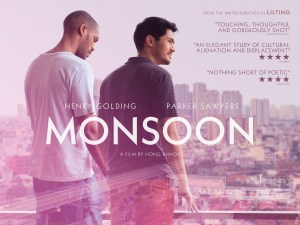 BASICALLY…: A young British-Vietnamese man (Golding) returns to Saigon for the first time since he was forced to flee as a child…

Between Spike Lee’s Da 5 Bloods and now Hong Khaou’s Monsoon, this year has seen a couple of very different (i.e. non-white) perspectives on the Vietnam experience. Between Lee’s adventure epic discussing the role that African-Americans played in the war when not even their own home country was entirely ready to call them heroes, Khaou’s mellow follow-up to his debut feature Lilting examines the long-term consequences of those forced to migrate from the country at an early age, only to return years later to a world they no longer recognise.

Khaou’s thoughtful and steady film makes a calm and carefully calculated approach to his subject matter, which can easily put off some people for its slow, arguably repetitive nature, but the underlying tragedy laced in subtlety is ultimately what makes it a worthwhile movie to encounter.

Our main character is Kit (Henry Golding), a young man who, as a child, fled Vietnam during the war with his parents, and started a new life in England. Now, he has returned to Vietnam for the first time since then, with plans to scatter his parents’ ashes, and as he wanders about the country he initially grew up in, reuniting with some childhood friends and even hooking up with American fashion designer Lewis (Parker Sawyers), he can’t help but feel like one of the many tourists that constantly visit the country; such is the sharp contrast that Kit has to deal with as he tries to find meaning in his once-forgotten roots.

The film presents itself as a series of snapshots from this guy’s trip, from his initial arrival at the hotel (one of his first questions to the staff, as with any tourist, is about the Wi-Fi password) to some of his awkward encounters with past acquaintances, which involve him giving gifts such as biscuit tins with the royal family plastered all over them. There’s not so much of a traditional plot – there’s really no major revelations, nor any third-act surprises – but more so a collection of minor events that ultimately contribute to the protagonist’s feelings of being a stranger in his own native country. To some, this may sound very dull and tedious to watch, because it is mostly uneventful, but the lack of structure ultimately seems to have been Khaou’s intent; a Cambodian-born political refugee himself, having fled Vietnam as a boy and emigrated to England with his family, he has crafted a very personal, almost semi-autobiographical, account of feeling lost in the very country he is native to. You can feel the aimlessness and uncertainty of the main character in scenes which culturally are fascinating to watch – the very first shot of the film is of car and motorcycle traffic flowing nearly uncontrollably – but to him, they are memories he cannot even fully visualise anymore. Khaou, in both his script and direction, manages to convey the feeling of isolation with almost too much ease, with a sensitive portrayal that gives viewers insight into his own personal dilemma of self-identity without going too far into melodrama.

As the film’s on-screen Khaou surrogate, Henry Golding delivers a quiet and understated performance that speaks volumes to the actor’s ability to command the screen even without a single infliction in his voice. His Kit is clearly unnerved, jaded even, by his arrival in a place that is culturally and visually different than what he is used to, yet he is still technically expected to call it home, and you can sense trepidation in his body language as he wanders aimlessly through the streets, seeking out old locations from his past and asking the locals directions on how to get there, as though he’s completely lost in an unfamiliar territory. Golding also shares some good scenes with Parker Sawyers, whose Lewis has his own misgivings about the role his father played in the Vietnam war, and how he was not given the proper psychiatric help that he clearly needed after being discharged. Their romantic chemistry is sound, and based on a mutual level of respect that makes clear how, despite their very different experiences caused by the war, they have reached a similar place of pondering in their relatively young lives.

As the film starts to wrap up, with glimpses of an optimistic future for both Kit, his love interest, his family and ultimately his acceptance of identity, you feel like you have gone on just as soulful a trip as he has. The stunning cinematography, provided by Benjamin Kracun, captures the Vietnam landscapes with a muted, even bleak, cloudy outlook that’s illuminated only by the night-time city lights, in an other-worldly fashion which further hones in on the main character’s uneasy feelings of no longer belonging. As cliché as it is to say that the city itself is a main character, it really does feel like that because Khaou portrays it as an inviting, yet suspect, environment for our lead to have a cultural experience in, without giving it too much of a free pass for its incessant beauty.

The movie certainly won’t be for everyone, especially those who feel it is too slow and too inconsequential to be fully deserving of their interest, but Monsoon is a thoughtful, studious account of an identity crisis in full swing, one that’s beautifully understated and more provocative than you might give it credit for.

Monsoon is a thoughtful account of a man’s return to his native country which he no longer recognises, which writer-director Hong Khaou lends a personal touch having been through those motions himself, and through beautiful cinematography and nicely understated performances, he is able to offer a very unique experience of post-war Vietnam that nobody else has yet to offer.

Want to decide what the movie’s like for yourself?
Check out Monsoon showtimes in London
via