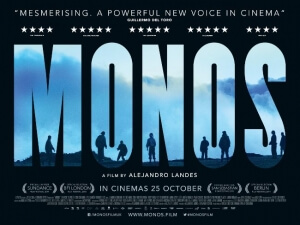 BASICALLY…: A group of teenage soldiers on a remote mountaintop are assigned to watch over a hostage (Nicholson)…

Kids can be animals – every adult, deep down, knows this to be true – and when left to their own devices they can be even more brutish and dangerous. Just look at classic literature such as Lord of the Flies, or films like Larry Clark’s Kids, which show how messed up they can truly be when you take away adult supervision, and now Monos shows what exactly what would happen if you not only left them to pretty much fend for themselves, but also gave them guns and militarised them.

The results, as you may already be picturing in your head, are incredibly tough to stomach, but it makes for some visceral and downright inspired viewing.

It is a film of two halves; the first predominantly takes place on a remote mountaintop somewhere in the Colombian wilderness, where a group of young guerrillas fool around as they watch over a conscripted milk cow named Shakira, and a female prisoner (Julianne Nicholson). The only adult supervision comes from a hardened “messenger” (Wilson Salazar) who whips them into line and brutally trains them on behalf of the nameless organisation which they all serve. Problems too spoiler-heavy to detail soon arise, however, which eventually leads into the film’s second half, where the guerrillas and their hostage make their way through the wilderness – and this, in what must be a shock to no-one, is when things really start to go off the rails.

And when it does, writer-director Alejandro Landes does not hold back with the sheer intensity, leaving you completely fearful of these young rebels and, even more so, the harsh ideologies they have adopted. These are a group of juveniles that have become so influenced by the militaristic nature of their surroundings that they only know each other by their nicknames, such as Wolf, Rambo, Bigfoot, Smurf and so on, and have combined dangerous activities such as drink, drugs and wild machine gun firing with the mentality of children that have been given tools to play with that are way too advanced for their age group. There is an underlying tragedy in each one of these kids’ cases, not just because they are so young but also because you get the feeling that, if they were fortunate enough to be raised far away from this lifestyle, they could have turned out completely fine. Instead, these are trigger-happy, rambunctious and downright scary individuals, all of whom have been consumed by the nature of conflict, enough to where most of them are happy to serve in the most brutal ways imaginable.

Landes makes you feel the tension through some lucrative and heavily naturalistic performances from his cast – many of them, aside from more experienced actors like Julianne Nicholson and Moisés Arias, are made up of unknowns – which vary from vaguely sympathetic to downright terrifying, and some absolutely gorgeous cinematography that takes full advantage of the strange beauty that the Colombian wilderness has to offer. Its visual splendour serves as an intentional contrast to the bleak themes on display here, from the rough indoctrination of young military types to inhumane captivity and the slim chances of leading a normal life once everything is said and done. What Landes does here that really stands out is that he finds a way to combine both the visuals and the themes to tell a story that has been told before in several variations – see, again, something like Lord of the Flies – and does so in a way that not only feels fresh but extremely thought-provoking. As fearful as you can be of these young people, you do see that there is still some hint of humanity buried beneath many of them, and the healthy combination of both the strong performances and excellent cinematography leaves you able to feel for them even though you know that you moralistically shouldn’t, further highlighting how they are, in fact, more tragic than you’d probably realise at first glance.

It is certainly not an easy film to watch, with moments of shocking violence and brutal temperaments within these teens making it hard to even contemplate, but as long as you hold tight you’ll be transported into a world of pain, told with such cinematic prowess that at the very least makes it an irresistible experience from a visual standpoint. There’s plenty to unravel here beyond the pretty shots, though, as it makes you think hard about several heavy themes, leaves you gripped by some intense performances, and has you completely spellbound by how Landes doesn’t hold back in showing how much of an unforgiving environment this is; at any moment, anyone or anything could be killed, with any trace of hope suddenly disappearing in a flash, which is something that the filmmaker wants to make wholly apparent in a place where nobody, not even the most innocent of faces, can be completely trusted.

Proceed with caution, especially if you don’t have a strong stomach for violence and overly-wild juvenile behaviour, but Monos is a film that will feel as though it is worth it, because it is so strong in nearly every department, to a point to where you might even come round to it by the time things wrap up. But don’t expect the film to change your mind about kids if you’re not entirely fond of them; if anything, it’ll make you want to move up your vasectomy or tubes-tying session to the earliest date possible.

Monos is a bleak but effective war drama which gets into some deep themes about juvenile militarisation and captivity, and is backed by a slew of strong performances and excellent cinematography which raise the levels of intensity even higher – but don’t count on it being a strong argument for having children if you’re having that conversation!

Want to decide what the movie’s like for yourself?
Check out Monos showtimes in London
via