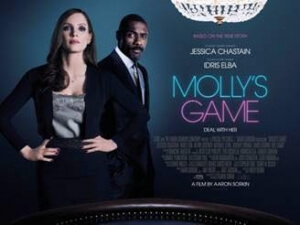 Despite a prominent career that has earned him constant praise and endless awards, Aaron Sorkin has usually been criticised for his lack of truly compelling and three-dimensional female characters, who exist outside of just providing support for the male hero, or being something of a throwaway sex object in some cases.

It’s a criticism that Sorkin seems to have spent his entire directorial debut trying to rectify, by taking on a fascinating and empowering story about a woman who made something of herself on her own merits, and turning it into a complex, witty and always entertaining movie that serves as a challenging watch (in a good way) but sticks the landing because you’re having so much fun on this ride.

The film is about Molly Bloom (Jessica Chastain), a former Olympic skier who, after a career-ending fall, takes on a secretarial job in Los Angeles before going on to law school. It is through this job and her aggressively awful boss (Jeremy Strong) that she becomes introduced to the world of underground poker, where high-end players including movie stars, sports personalities and businessmen, come to gamble their great fortunes, and provide Molly with some rather hefty tips. She soon begins her own poker business, attracting even more players and slowly but surely building her fortune while side-stepping any illegal doings. However, she soon becomes inadvertently connected to the Russian mob and other shady figures, leading to her eventual arrest by the FBI and her hiring of lawyer Charlie Jaffey (Idris Elba) to help clear her name and regain her reputation.

With Sorkin making his directorial debut while naturally also providing the screenplay, it reminds me a little of when Stephen King made his only film as director, Maximum Overdrive, and how the trailers for it consisted of a manic and clearly coked-up King boasting to the camera that he “just wanted someone to do Stephen King right” and so set out to do it himself. In that sense, Molly’s Game is Aaron Sorkin’s Maximum Overdrive, though his movie sadly contains far fewer Green Goblin trucks and screaming Yeardley Smiths; it’s a film that displays Sorkin at his most Sorkin-iest, complete with killer dialogue delivered in such a fast-paced back-and-forth manner that it rarely leaves you a moment to breathe, and tells its story in an amusingly non-linear narrative. It’s fun to watch him finally take charge on a major motion picture that he wrote and direct his actors exactly how he envisioned it whilst writing, as opposed to watching other directors like David Fincher, Danny Boyle and Rob Reiner interpret his rapid-fire dialogue and overall approach to storytelling in their own unique ways. Knowing that he is the sole creative force on this project, it can potentially feel intrusive in how his dialogue dominates every single scene, but luckily it’s a finely written script – though not nearly as outstanding as, say, The Social Network, which happens to be one of my favourite screenplays ever – that offers some real dramatic depth for its characters and provides an interesting story to keep your attention.

He also seriously lucked out in his choice for a leading lady; Jessica Chastain is one of today’s most vibrant and electric actresses, and once again she seriously knocks it out of the park in a lead role that feels tailor-made for her talents. Similar to how she commanded every single scene in her equally amazing performance in Miss Sloane, she absolutely dominates the screen with an exceptionally breath-taking turn as a woman who knows the kind of power she holds in her hands, and uses it to her great advantage whenever she can. She is absolutely fantastic in this movie, delivering and selling Sorkin’s trademark dialogue like a goddamn pro, whilst also adding her own sense of pathos and humanity to this incredibly complex character, and honestly it’s worth recommending the film just to see her give what has to be one of the most impressive performances of the year; same, too, can be said about Idris Elba, who gets to deliver an awesome monologue near the end of the film that, again, seems like it was tailor-made to suit his already strong acting ability.

As solid as the writing, direction and especially the acting seems to be, it will probably tend to work best with people who REALLY know the game of poker down to a tee. This movie is filled with all sorts of jargon surrounding the game which made it more than a little hard to keep track of at times, and I was praying that Sorkin would take inspiration from The Big Short and try to simplify the terms for the audience, with fun cutaways like Margot Robbie in a bubble bath explaining how CDOs work. As someone who’s clearly not into poker, I did admittedly struggle to keep up with a large chunk of it, and was left a little confused as to some parts that were happening that I feel stupid for not recognising as they are integral to the overall plot. Maybe Sorkin just took the audience a little too much for granted, or maybe I really am that dumb, but in this case I wasn’t having the easiest time trying to cipher what was happening in this environment.

Nevertheless, I did have fun with it, and still managed to enjoy the ride it was taking me on, even if I wasn’t entirely sure I understood the mechanics of it, and would certainly recommend Molly’s Game to hardcore Sorkin enthusiasts who, like Stephen King before him, just wanted to see someone do Aaron Sorkin right.

Molly’s Game delivers a solid and entertaining drama with killer dialogue by writer and first-time director Aaron Sorkin, and knockout performances by Jessica Chastain and Idris Elba, though it may play better to poker enthusiasts would would understand the constant jargon more than the average audience member.