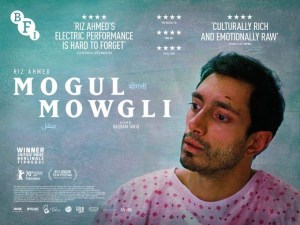 BASICALLY…: A British-Pakistani rapper (Ahmed) on the cusp of worldwide fame is suddenly struck down by a life-altering illness…

Between The Forty-Year-Old Version and now Mogul Mowgli, it’s a good time for films about aspiring rappers by fresh filmmakers with a solid new voice to share.

In the latter’s case, the voice doesn’t just come from director and co-writer Bassam Tariq (in his narrative feature debut after a handful of shorts and documentaries), but also its star and other writer Riz Ahmed, an increasingly prolific actor who’s earned attention in just about everything from Four Lions to Nightcrawler to Rogue One: A Star Wars Story. Here, Ahmed is firmly in control both on-screen and in the writer’s room, with a powerfully portrayed struggle that incorporates themes of family, loneliness, and spiritual guidance – all with some impressive rhymes showing up every now and then.

Ahmed plays Zed, a British-Pakistani rapper based in New York whose star is on the verge of rising thanks to a potential tour opening up for a more famous act – provided that his main rival who goes by the name RPG (Nabhaan Rizwan) doesn’t get there first. However, during a visit to his family back home in England, Zed – whose real name we learn is Zaheer – is suddenly hospitalised and diagnosed with an autoimmune degenerative disease, which sees him slowly start to lose most of his muscle strength. Desperate to overcome his illness so he can get back on tour, he opts for an experimental treatment that may give him his strength back, but might make him infertile in the process, which kicks off a tense debate with his conservative parents who believe a life without having children is worthless, and a personal journey of realisation for Zed that involves a number of hallucinatory sequences, all with a mysterious taunting figure with a face covered by flowers.

The film consistently flip-flops from gritty family drama to straight-up abstract theatre, containing surreal imagery that includes – but isn’t necessarily limited to – visions of a snow-sprinkled family on a train, flashbacks to childhood that somehow merge with present-day, and rap battles where racial insults are exchanged. All of it is boxed in a tight 1.33:1 aspect ratio which somehow highlights further the other-worldliness of these sequences, and even the airy nature of scenes I’m fairly certain are taking place in reality. Tariq is clearly a director unafraid to experiment with style when it comes to these literal fever dreams, and he has enough of an understanding of a simpler three-act structure to give them some room to space them out over, rather than just lumping them all together to create a surreal mess. The filmmaker’s core strength seems to be how he can also lend a feeling of authenticity to the key drama at play, with Zed/Zaheer interacting with his family in such a way that feels real and – appropriately, given his past documentary experience – unscripted, which makes you feel as though you truly are peering into the private life of these fictional, but no less real, characters.

While it is stylistically as strong as its substance, with some of its harder hitting themes such as family connections given the right amount of focus alongside everything else, the film’s true highpoint is Riz Ahmed himself. In a performance that is daring in how far he can physically and mentally push himself, the actor brilliantly encompasses his character’s arrogance but also his deeper yearning for an increasingly far to reach connection to another person. A phone call with his ex-girlfriend later in the film is heart-wrenching, as is an argument with his father about his probable inheritance of the disease he is currently fighting, and Ahmed makes such difficult scenes incredibly emotional to watch because you can tell he is welling up on the inside and barely holding it together on the outside. Simple scenes where he struggles to even get off the toilet show his utter physical dedication to the part, which not a lot of actors – especially ones who co-produce and  co-write the script – would be willing to even attempt. As for his on-screen rapping skills, he can spit quick rhymes like a champ, in a display of both powerful and complex writing as well as a performance that’s full of energy and quick wit.

Ahmed is already gaining a lot of recognition for his current line of character work, but this should hopefully project him even further into the public subconsciousness as an actor who isn’t afraid to go the extra limit for a well-defined part. Interestingly enough, Ahmed is also headlining a very similar film this year called Sound of Metal, which – as fate would have it – is also about a rising musician struck down by a degenerative illness, which from what I’ve heard about it has more potential to reach mainstream audiences that Mogul Mowgli does (Sound of Metal hits Amazon Prime Video later this year). Regardless, Riz Ahmed’s work in this film does not deserve to be overlooked, as it boosts an already powerful film with an even more forceful turn that’s hard to look away from.

Mogul Mowgli is a powerfully told drama that incorporates heavy themes of family and loneliness with a number of abstract sequences, all held together by Bassam Tariq’s tight direction and especially star and co-writer Riz Ahmed’s incredibly dedicated lead performance which should project the actor even further into the public consciousness.