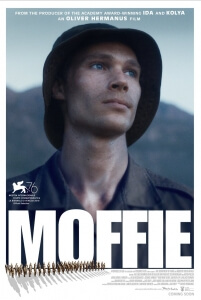 Not since the Nazi regime has there been an authority quite as brutally discriminatory as Apartheid; the segregation policy in South Africa and South West Africa during much of the latter half of the 20th century became known to be such a horrific ordeal for anyone who wasn’t white, straight etc that to this day, it’s unfathomable that such practises were allowed to be institutionalised at all.

It must have also been tough for some of the more sensitive young recruits drafted to defend the regime, if Moffie is any indication, in which the methods and tactics used to train soldiers into becoming stern “protectors” of Apartheid are fully shown in their uncomfortable light. It’s not an easy watch because of it, but it is nonetheless a powerful story of finding one’s own way in an incredibly suppressive society.

Like most young men over the age of 16 were in 1981, Nicholas (Kai Luke Brummer) is conscripted for compulsory service in the South African army, where he and fellow other soldiers are to be trained to defend their borders from the growing Communist threat from Angola. As soon as he steps onto the train transporting him and the others towards the army base, Nicholas enters a world of shouty boisterousness, with commanding officers constantly barking orders and insults to the recruits as they put them through one tiresome regime after another. They are also trained to punish those who sympathise with the black population, as well as anyone who engages in homosexual acts (the film’s title is the Afrikaans translation for the f-word – not the four-letter one – which is abusively hurled at by soldiers at numerous points); a bad time, then, for Nicholas to begin experiencing his own sexual awakening, which is sparked by a bond that forms between him and fellow soldier Stassen (Ryan de Villiers).

While we are seeing things primarily from Nicholas’ point of view, from his slow integration into the training regime to flashbacks of him as a young child going through a traumatising ordeal at a public swimming pool, the character is merely an audience surrogate for the film’s exploration of Apartheid’s damaging effect on certain people at the time. Racism and homophobia is around every corner, well before we even reach the army base as we see the new recruits harass a black man sitting on a train platform by calling him the n-word and throwing things at him, while we also get to see some people’s volatile reactions to gay activity as though they’ve caught someone committing a murder right in front of them. Of course, it’s all very difficult to stomach, and even more so by the horrifically machismo behaviour that people are heavily encouraged to embrace; it’s like you’re attending a summer camp with the biggest douchebag frat-boys in your school, except everyone expects you to adopt this mentality by the end of it. Director Oliver Hermanus makes you constantly feel like you’ve wandered into a dystopian world of unsettling mean-spiritedness, but he also allows up to step back and see the damage it is doing to these vulnerable young men, some of whom would probably be better off without nasty commanding officers humiliating you or beating you up with every false breath. He really does plant you into this world, and seeing it up close make you feel sick in your stomach at times, as it’s very much meant to do.

Hermanus also achieves an unsettling portrait of the times with boxed-in cinematography by Jamie Ramsay, which captures the gruelling experience in a claustrophobic setting that, much like the main character in this movie, struggles to feel comfortable in its own skin. The uncomfortableness in the cinematography, however, is the point; this is not a romanticised look at history we’re watching here, but rather a snapshot of a horrifically prejudiced regime that violently divided practically an entire continent, and the square aspect ratio along with some guerrilla-inspired camerawork go hand-in-hand to make you realise what a horrendous ordeal it truly was. It really strikes an emotional chord, too, because the way it also captures some incredible sunsets and atmospheric shots of the wastelands, you’re reminded that this is a beautiful world where terrible stuff just happens to take place in, additionally personified by some of the longing gazes and confused expressions of our main character, played by Kai Luke Brummer in a quiet and understated performance.

Needless to say, this isn’t the kind of film that is designed for audiences who want some kind of joy in their film selections; the constant discrimination and toxic masculinity make it very tough to take at times, as it should do, but it’s done in a way that makes you think about the mistakes we’ve made in our history and how we can learn from them so that prejudice on this level can never occur again in our futures. A thinking man’s film to a fault, Moffie is an experience that won’t exactly leave you with the warmest of feelings afterwards, but as a portrait of an extremely disturbing period that would be penalised in a just world for its disregard for basic human rights, it’s a quietly powerful and equally moving take on events which we all, especially at a time when prejudice is starting to once again bubble at the surface, could learn from.

Moffie offers a very uncomfortable look at the discriminatory Apartheid regime, told through the eyes of an audience surrogate played by a quiet and understated Kai Luke Brummer, and which doesn’t shy away from the brutal nature of its institutionalised prejudice and the encouraged levels of toxic masculinity, but it remains a powerful and emotional snapshot of a time in our history that we should both be ashamed of and can learn an extraordinary amount from.