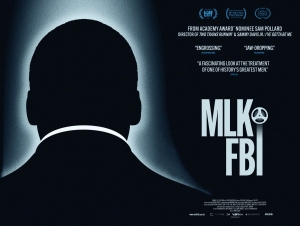 BASICALLY…: An account of the US government’s surveillance and harassment of Dr. Martin Luther King Jr and his family…

“Violence will not succeed in changing this nation.” These are words spoken during the captivating new documentary MLK/FBI, but in the immediate aftermath of last week’s devastating assault on the US Capitol by enraged Trump supporters, they also serve as an accidental summary of the failed insurrection. It seems, no matter what, that America is always tied to some kind of belligerence whenever it is faced with severe civil rights issues or, in the case of last week’s attempted coup, a refusal to accept a democratically-chosen reality.

However, when it comes to the documented struggles between Dr. Martin Luther King Jr. and government organisations who saw his popularity as a threat, the ensuing mistrust and soured opinion of Dr. King – leading up to his assassination in 1968 – are no doubt the result of belligerence caused by years of departmental interference from the Federal Bureau of Investigations, led by its director J. Edgar Hoover in a petty campaign to discredit the good doctor’s name.

Evidence of the FBI’s surveillance of Dr. King is at the forefront of director Sam Pollard’s film, which charts both the civil rights leader’s growing influence throughout the 1960s, and the Bureau’s growing suspicions of his all-too-easy ascent to power. Through audio interviews with former FBI personnel and some of Dr. King’s closest associates, we learn of the FBI’s methods of tapping his and his closest allies’ phones, bugging hotel rooms and sowing discontent in the media about Dr. King’s alleged ties to members of the Communist Party, and later on – in a much more personal attack – recording some of his extra-marital affairs and sending them to his wife Coretta Scott King, as part of a way to sully his good-natured Christian reputation.

As a public figure who was well known throughout the world for pushing non-violent protests against the treatment of coloured people, it is somewhat ironic that Dr. King was targeted by a powerful force like the FBI as a potential instigator for mass violence. The film is compelling in its unboxing of the FBI and Hoover’s rather malicious attempts to label Dr. King as just that, along with the suggestion that it is highly likely their campaign against Dr. King, coupled with the fact that Hoover came from a segregationist background, had blatant racial biases which were not uncommon during that time period, even going so far as to declare a great number of black movements a major threat to American civility. Pollard’s documentary also shows how it was incredibly easy for most people to side with Hoover and his “G-Men”, thanks to their lionisation through several film and television productions that portrayed the FBI as heroes akin to comic-book icons, while the historically insensitive portrayal of coloured people in similar media such as D.W. Griffith’s Klan-glamourising The Birth of a Nation (wherein black characters are predominantly played by white actors in blackface) made Dr. King and his associates easy targets for those still harbouring great prejudice for the black community. It’s made evident that racial bias played a small but significant role in the FBI’s investigations of Dr. King, which makes the rest of the revelations unearthed in MLK/FBI all the more disheartening when you realise not even one of the most powerful organisations in the country was completely free of such biases.

Although, in an interesting twist, the film also puts Dr. King himself under the spotlight and shows that the revered civil rights leader was, indeed, not as saintly as he might have been made out to be. The interviewees, some of whom knew Dr. King personally, are quick to admit that he was not a perfect person, even confirming that he did indeed have sexual relations with other women during his life; even so, they still declare that none of it is enough to completely tarnish his overall legacy, as was the FBI’s intention by making their recordings of such affairs known to Dr. King and his family. Nonetheless, we do hear of his great internal struggle to compose himself in the face of further issues such as poverty and the ongoing war in Vietnam, and his uneasy relationships with Presidents John F. Kennedy and Lyndon B. Johnson, with the former’s brother even giving the go-ahead to the FBI to start the surveillance scheme against Dr. King, all of which made the ensuing harassment more difficult for him to comprehend during his more private moments. While the film ultimately comes out in favour of Dr. King over the FBI (naturally), it also boasts a strongly balanced perspective that puts the situation under a much more even microscope, saying that neither side is truly right or even truly wrong, but with historical connotations factored in, it becomes a somewhat depressing sign of the times.

To some, watching a hard-hitting political documentary about a government’s unwarranted surveillance and harassment of a non-violent civil rights leader might not be the first thing on everyone’s minds, especially after last week’s condemnable actions in Washington D.C., but it only makes MLK/FBI a far more timely watch. It shows the sheer lengths someone can go to discredit someone that they simply don’t like all that much, but also the strong defiance of that someone to keep on with their endless fight for civil justice all the same, no matter what their opponents may do to discredit them.

MLK/FBI is a captivating documentary that charts the FBI’s malicious surveillance and harassment campaigns against Dr. Martin Luther King Jr., which unveils a deeply rooted system of racial bias that very likely contributed to their increasingly devastating attempts to discredit the civil rights leader, and while the film stops short of completely lionising the historical figure it also serves as a strong reminder of Dr. King’s spirit in the name of civil justice.

MLK/FBI is available on digital platforms from Friday 15th January 2021.