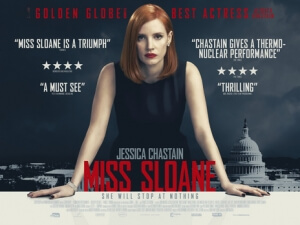 BASICALLY…: Ruthless lobbyist Elizabeth Sloane (Chastain) is tasked with backing a gun control bill, and she pulls no punches in her efforts…

Flash back, if you will, to 2011, when Jessica Chastain was just one of countless actresses waiting for their big break in the film industry, only to suddenly blow up overnight with not one, not two, but SEVEN major roles in just as many major films within the same year. From festival favourites like The Tree of Life and Take Shelter, to crowd-pleasers like The Help, suddenly her career skyrocketed and she became one of the top performers to hire due to her impressive range and natural abilities. Now, five years and two Oscar nominations later (for The Help and Zero Dark Thirty), she’s already nabbed herself a contender for one of her top performances, ever – and it’s for a film that hardly anyone saw.

Miss Sloane, directed by John Madden (who previously directed Chastain in The Debt), received positive reviews but suffered a dreadful opening weekend in the States, not even making into the top 10 of the weekend box office, and ended up making only $3.5 million domestically off a $13 million budget. That really sucks, because not only does it feature a seriously knockout lead performance by Chastain, but the film somehow achieves the impossible: make political lobbying feel rather exciting and fascinating.

Chastain plays, of course, Miss Elizabeth Sloane, a cutthroat lobbyist with a reputation for doing whatever she can in order to win big for her clients. She is initially approached by her firm to represent the opposition to a proposed gun control bill that would require background checks on all firearm purchases, but Sloane surprises everyone by deciding to represent those in favour of the bill, putting her against her former employers and fellow lobbyist Pat Connors (Michael Stuhlbarg), and along with her team sets out to influence as many politicians as they can in order to get the bill passed.

That sounds like it would be boring as hell, but this movie has quite a few tricks up its sleeve to keep it from ever getting disinteresting; the most obvious one will be discussed momentarily, but it’s Jonathan Perera’s debut script and John Madden’s seamless direction that takes the spotlight for this paragraph. Like I said, this is Perera’s first screenplay but you really can’t tell with just how tightly wound and witty the dialogue and plot is; he gives the story and especially the characters the time of day to feel complete and three-dimensional even when they’re mostly just background figures, and the dialogue is so razor-sharp and thorough you have to applaud Perera for doing his damn homework. Likewise, Madden arranges for scenes to feel as tightly compressed as the interiors of its main character, leaving barely a breath of air in between exchanges and sometimes entire scenes, but keeps things firmly focused on where it needs to be without divulging into some other, unimportant plot thread. The closest comparison to a beautiful writer-director marriage I can make is probably Aaron Sorkin and David Fincher with The Social Network, but while Miss Sloane perhaps is a bit more Hollywood than that masterpiece of modern cinema, it definitely wears its clear influence on its sleeve.

The art of lobbying isn’t a particularly exciting one in real life politics, and some critics have blamed that fact for this film’s financial underperformance, but again Madden and Perera find a way to make it seem like something out of a long-lost Shakespearian epic. Never have you been more on the edge of your seat at a congressional hearing, or a fancy gala, or even a boardroom meeting; both writer and director make all of these mundane things and more feel like an action scene from Mad Max: Fury Road, and against all odds you actually care about whether a bill gets past the US Senate, which in these troubled political times, especially in the US right now, is a seriously undisputed achievement.

But this is Jessica Chastain’s show all the way through, and goodness gracious does she own every single bit of screen time she has in this movie, which is roughly 90% of it (but that other 10% is good, too). If this performance doesn’t officially certify Chastain as not just a major movie star – more so than she already is – but a goddamn rock star, then nothing will for quite some time, she is THAT good in this film. Her performance in this film is so mesmerising and uniquely amazing that it undermines even past Chastain performances that are considered to be her lesser work, like Interstellar or last month’s The Zookeeper’s Wife, all of which she in this films blows completely out of the water. She gives this cold and detestable character a sense of humanity, but even when Sloane is at her worst it’s fairly evident that she’s having the absolute time of her life, and Chastain sells it so well you’d swear she was actually this diabolical in real life (I certainly hope not, because she sounds like an incredibly awesome person). Put simply, she friggin’ rocks in this.

If this film had perhaps been marketed and campaigned a bit better – ironically, for a film about a lobbyist – then Emma Stone could have had a serious contender for the Best Actress Oscar a few months ago. But as is, if Miss Sloane proves anything, it’s that Jessica Chastain’s Oscar is a certainty in the future at some point, if anything to make up for the fact that she received sod all for this incredible performance of hers in this film.

Miss Sloane is a mesmerizingly engaging political drama that features solid writing, tight direction, and an absolutely captivating lead performance by Jessica Chastain, who gives her all and even more in what could possibly be her greatest role to date in a career thus far made up of great performances.