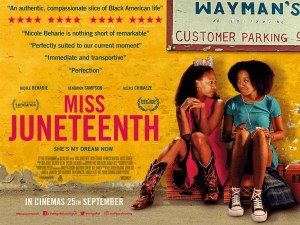 BASICALLY…: A former beauty queen (Beharie) prepares her rebellious teenage daughter (Chikaeze) for the same pageant she won years ago…

June 19th 1865, commonly known as “Juneteenth”, is a historic day for African-Americans, for it is the day when slaves were finally emancipated in full after Unionist soldiers declared them to be free in Texas. For many, it is a day to celebrate black culture, black heritage and black identity, but Channing Godfrey Peoples’ worthwhile debut feature sheds light on a unique side to the celebrations, that of the aspiring young women competing for a beauty pageant exclusively designed for the black experience.

Miss Juneteenth, being the self-explanatory title that it is, revolves around a competition where the winner is crowned that very title, and among the prizes is a scholarship to any historically black institution of their choice. It is a competition that Turquoise Jones (Nicole Beharie) was fortunate enough to have won back in 2004, but unlike her past counterparts – who have gone on to become civil rights lawyers and the wives of powerful politicians – she hasn’t progressed much in her small Texas town, working part-time jobs at a local barbeque grill and as a mortuary beautician. Nonetheless, she is obsessed with ensuring that her teenage daughter Kai (Alexis Chikaeze) now enters this year’s competition and be crowned the same title, despite Kai clearly wanting to do anything else such as dancing or hanging out with local boys.

Peoples shows great confidence with her directorial debut, based on her own childhood experiences of being dragged along to Miss Juneteenth pageants, with a tender family drama that puts a completely different part of the black experience under the microscope, and manages to ask some interesting questions about how far it can take somebody. Throughout the film, Turquoise constantly clings to the belief that the titular pageant is life-changing and thus more important than anything, even though she – despite being a winner herself – has led a life most ordinary, not even scoring a position of power in her small community. She cannot seem to accept that this is all there is for someone of both her colour and her sex, and if anyone in her family is going to be somebody then it’s going to be her daughter, who’s not even all that interested in the competition and, like those around her, reminds her that it’s ultimately meaningless. It’s an interesting take on the classic “stage mother” motif, because while Turquoise is clearly more engaged in the contest than Kai is, there is slightly more at stake for her here beyond just a simple title, because as racism continues to be a major issue for many black people today, she’ll take any chance she can get if it means that her child can get opportunities not many other people like her can achieve; it just so happens that she’s picked perhaps the most vain and artificial means of attempting to securing it.

Beyond the themes of black ambition which feel particularly vital in today’s world, Peoples manages to craft a rather sweet central mother-daughter relationship that’s both co-dependent and about as frustrating as any parent-child bond can be. Nicole Beharie and Alexis Chikaeze, both excellent, form a solid bond as the former struggles to provide whatever she can to give her child the best possible chance at the competition (including foregoing electrical bills to afford a dress), while the latter struggles to even find something she feels she’s legitimately good at, with dancing coming the closest to something formidable and even then she isn’t that good at it (not yet, anyway). You root for Kai to find her footing as much as you, strangely, root for Turquoise to achieve her high ambitions for her uninterested daughter, because both have their equally good reasons for having their own dreams, and they’re likeable characters who have each other’s best interests at heart.

The film is a solid exploration of the young black experience, both an inspiring coming-of-age drama and a lightly satirical jab at the vapidness and passive-aggressive tendencies of beauty pageants in general. Peoples holds it together with a smart script, understated direction and a couple of strong lead performances that make it a vibrant, highly watchable drama which gets by on sweetness and ultimately pride in his powerful identity.

Miss Juneteenth is a vibrant and unique account of the black experience, which writer-director Channing Godfrey Peoples combines with a sweet mother-daughter that’s boosted by smart and timely themes as well as a couple of solid lead performances that lend it a soft, highly watchable vibe.

Want to decide what the movie’s like for yourself?
Check out Miss Juneteenth streaming links and showtimes in London
via