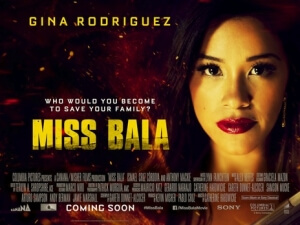 BASICALLY…: Whilst visiting Mexico, Gloria (Rodriguez) is forced to work for a ruthless drug cartel in order to find her kidnapped friend (Rodlo)…

Watching a movie as forgettable and generic as Miss Bala is one thing, but to watch it at quarter to 11 at night during its only showing of the day, after a week of late nights and not much sleep on my end, is an entirely different experience, and not an especially enjoyable one.

By the time I finally got around to watching this movie at such a ridiculous time of night – seriously, there were screenings of Captain Marvel that weren’t on this late – I was just about ready to flop into bed and rest my poor eyes after a long day of watching movies, so you can imagine my frustration as I realised that my sleep had to be delayed so I could watch a throwaway remake of the Spanish-language film of the same name, and not even one that’s memorable enough to talk about for too long.

But since you’re all such loyal readers, I shall do my best to recount with as much brain power as I can my thoughts and feelings about this movie, but be warned; there really isn’t a whole lot to say about it, other than that it’s a pretty by-the-numbers action thriller that’s not outright terrible, but not worth your time either.

In the film, Latin-American make-up artist Gloria (Gina Rodriguez) is visiting her friend Suzu (Cristina Rodlo) in Tijuana, Mexico where the latter is signing up for a local beauty pageant, but whilst out clubbing both of them get caught in the middle of a shoot-up, and Suzu goes missing in the process. Gloria is desperate to find her friend, but her efforts land her right in the hands of gang leader Lino (Ismael Cruz Córdova) who offers her help in searching for Suzu only if she assists them with some of their illegal activities, such as blowing up a secret DEA headquarters and acting as a weapons mule. Soon, though, Gloria begins to take matters into her own hands if she is to escape the control she is now under, and find her friend and get the both of them out of this whole mess.

Although I was fighting the urge to rest my eyes throughout a lot of this movie (which isn’t necessarily a knock against it, but rather a statement of how tired I was by that point in the day), I have a feeling that even if I wasn’t so tired, I would still struggle to remember specific things about it because, truly, there’s not much about it that’s memorable enough to talk about. Standard stuff would include saying how the actors do fine here; Gina Rodriguez is a solid lead who carries this movie well enough, and I rather enjoyed Ismael Cruz Córdova’s character, who’s this pig-headed and alpha male villain who’s clearly evil but fancies himself as the soft-spoken heroic figure in an action-centric story practically tailor-made for a guy like him, so it’s extra satisfying when Rodriguez manages to steal that narrative from him throughout the movie. The action, for the most part, wasn’t as haphazard and all over the place as I had feared it would be, which for director Catherine Hardwicke is good news, seeing how she hasn’t really done action of this level in her career so far, so I have to give her props for at least making those scenes feel as intense as she could with her studio limitations.

Outside of those things, though, I really can’t think of much else that’s worth praising about this movie, not because it’s completely awful but because it’s mainly just uninteresting and not very good at holding your attention. You find yourself just thinking more about other things – in my case, it was when I would finally be able to get into bed – than actually caring about the characters or what they have to do throughout most of the film, and because of that it’s easy to get a little lost in the middle of everything, which is saying something because this isn’t exactly a complicated plot to follow. It is, however, a rather nonsensical plot when you break it down, filled with things that don’t make a whole lot of sense, twists that only a person of very little intelligence would not see coming, and a distinct lack of logic in some of the decisions that the characters make. A lot of it is comprised of stuff you’ve seen done much better in other films, which actually do hold your attention because maybe the characters and the story were a lot more interesting than in this film, and they’re not even clichés that are done in a fresh or unique enough way so it’s made all the more duller as a result.

There’s no reason to check this movie out, at least not in the cinema (and especially not if the only time it’s showing is less than an hour and a half until midnight for whatever goddamn reason); it’s a film that doesn’t have much purpose in its existence, other than to perhaps make people curious about whether the original is any better or not (even without having seen it, I can probably guess that it is) and to maybe satisfy people’s boredom if they’re scrolling through Netflix during one lazy afternoon. For me, it just went completely in one ear and out the other; I’ve seen far worse movies like this, and for all the negative things I’m saying about the film I was never outright hating it, but it’s not going to be one that I look back on with nostalgic memories.

It’s a little sad when the nicest thing I can say about it is that it was over quick enough that I could rush back home and finally crawl into bed, and catch up on the sleep that had been robbed from me by this movie.

Miss Bala is a mediocre action movie that, despite some good performances and a decent handling of the action by director Catherine Hardwicke, never becomes interesting or memorable enough to leave that much of an impression on the audience.