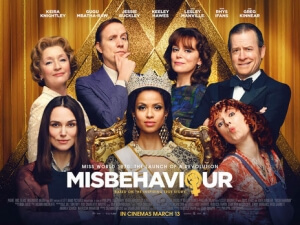 BASICALLY…: As preparations for the 1970 Miss World beauty competition in London are underway, a group of women hatch a plan to disrupt the event…

To many, it may have seemed like just another event, but the 1970 Miss World beauty pageant ended up being far more historic than anyone could ever have imagined, from its crowning of the first coloured woman as Miss World to the launch of the Women’s Liberation Movement into the public consciousness. Who would’ve thought that a mere beauty competition, now deemed by most of society to be pretty sexist, would have done so much to advance important social and political ideologies?

The filmmakers behind Misbehaviour certainly have, and their wildly entertaining look at the events leading up to it offers so much insight into its ramifications that its execution is just as powerful as its messages.

The film adopts a structure that allows us to view the events of the 1970 Miss World competition from several different perspectives. For one, there’s Sally Alexander (Keira Knightley), an academic who forms an alliance with feminist activists such as Jo Robinson (Jessie Buckley) as they plan to infiltrate and protest the event. We also get to see things from the point of view of coloured contestants Jennifer Holsten (Gugu Mbatha-Raw) and Pearl Jansen (Loreece Harrison), who hail from Grenada and South Africa respectively; there’s also pageant runners Eric and Julia Morley (Rhys Ifans and Keeley Hawes) who are struggling to put the show together as it heavily becomes the target of protests; and there’s even a vantage point from legendary comedian Bob Hope (Greg Kinnear), who hosted the now-legendary show, much to the chagrin of his put-upon wife Dolores (Lesley Manville).

Anyone who knows the events surrounding the 1970 Miss World pageant will not be surprised with how it plays out here, but those who don’t are in for an interesting, and in some ways essential, history lesson by way of crowd-pleasing drama.

Director Philippa Lowthorpe, previously of the family film Swallows and Amazons as well as the acclaimed BBC miniseries Three Girls, pulls off each and every one of the different perspectives, which in the hands of a sloppier filmmaker would have been jumbled together in a confounding mess, and she uses them all to highlight tons of key issues that were major problems both then and today. You have the more obvious topics such as sexism on display here, but also themes of racism (apartheid is brought up around the South African contestant), inappropriate behaviour (with Bob Hope saying and doing things that would easily derail his career in a post-Weinstein world) and, perhaps most poignantly, the desire for women to empower themselves through ways which others consider degrading. The latter theme sticks out for me because, although the concept of Miss World and indeed any beauty pageant is pretty abhorrent, the fact that most of the competing women in this film use it purely as a means to make themselves feel strong when the whole world is conditioned against them – especially Holston, who has to deal with being both a woman and coloured – is a nifty message you don’t see a whole lot in films like this. It automatically pushes itself far from being just black-and-white about the whole thing, and as previously stated makes effective use of its multiple perspectives to highlight how these issues are not just about one way over the other (something that the recent Black Christmas movie really could have caught on to).

It’s also a pretty strong ensemble movie, with no one actor taking the reigns as the de facto lead. Sure, there are name players like Keira Knightley and Greg Kinnear among the cast, and while they do well for themselves – Kinnear in particular steals entire scenes, acting underneath some decent make-up – everyone gets their moment of glory, whether it’s Jessie Buckley who’s having plenty of fun or Gugu Mbatha-Raw who brings a bit of class and sophistication to the mix. Each one of the actors compliments the other, allowing every single person the time and power to stand out, even if it’s just for a line or two. They all bring their A-game to material that is already fascinating and accessible, made so by not just director Lowthorpe but also writers Rebecca Frayn and Gaby Chiappe who inject humour, profound drama, and a feel-good tone that’ll have you cheering along with the women fighting for their freedoms.

How remarkable it is that the events depicted in this movie transpired fifty years ago this year, and looking at how much has changed since then really makes you think how far we’ve all come in regards to equal gender rights. Of course, there’s still a long way to go until everyone is truly considered equal and discrimination against women is stamped out forever, but for every Harvey Weinstein or Donald Trump there is a Greta Thunberg or an Alexandria Ocasio-Cortez out there who are actively campaigning for the change to come sooner than we think. Seeing how the women depicted in Misbehaviour are still fighting for those changes fifty years on, their passion and dedication means we could well be even closer to being a fairer and more equal society than ever.

Misbehaviour is an entertaining look at the events leading up to and including the historic 1970 Miss World pageant, from differing perspectives that are well-handled by the filmmakers and actors which offer up unique insights into themes and messages surrounding the very nature of the event.

Want to decide what the movie’s like for yourself?
Check out Misbehaviour showtimes in London
via