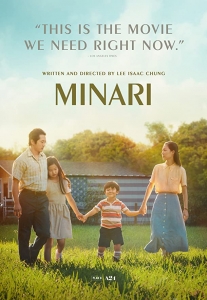 BASICALLY…: In the 1980s, a Korean-American family moves to Arkansas to start a farm…

This review of Minari was conducted as part of the Glasgow Film Festival 2021.

Thanks to the historical success of Parasite at last year’s Oscars, Korean cinema has finally broken into the mainstream, with the works of auteurs like Bong Joon-ho, Park Chan-wook and Yeon Sang-ho receiving far greater attention and appreciation from Western audiences everywhere (it’s even gotten to a point where the online community has expressed outrage over the news of a potential US remake of Sang-ho’s breakout horror Train to Busan).

Minari, then, couldn’t have debuted at a better time. Originally premiering in competition at last year’s Sundance Film Festival, where it won both audience and jury prizes, writer-director Lee Isaac Chung’s semi-autobiographical family drama has seen a lengthy presence amongst critics and curious viewers throughout the last year, and even more than a year after its world premiere it’s still regarded as not just one of last year’s best films, but also a major contender for this year’s Oscars which, should it perform well, could mean glory for Korean cinema for the second year running.

Whether or not Minari actually does beat out other frontrunners like Nomadland and Mank remains to be seen, but don’t count it out as a potential spoiler in the race, especially when it’s such a heart-warming and emotionally resonant experience that’s fulfilling for just about anyone.

Set in the 1980s, we first meet the Korean-American Yi family as they’re moving from California to a plot of land in rural Arkansas. The father, Jacob (Steven Yeun), has purchased the land in order to start a farm where he intends to grow Korean produce and sell to nearby vendors, while he and his family – including his wife Monica (Han Ye-ri) and two young children Anne (Noel Kate Cho) and David (Alan Kim) – live in a trailer home on the premises. While the children seem engaged with their new home, particularly David who was born with a heart condition, Monica is less pleased since she’s had to leave her comfortable life in California behind and acquire a lowly job alongside her husband sexing chicks to make ends meet. Soon, the family is joined by Monica’s elderly mother Soon-ja (Youn Yuh-jung), who has flown from Korea to look after the children, and together the family experience their fair share of breakthroughs, setbacks, and meaningful resolutions as they try to achieve the American dream for themselves.

This is exactly the kind of movie that Hillbilly Elegy so desperately wanted to be, but was so caught up in its own self-importance and its pandering towards rural Ozark communities that it forgot to actually have real heart, and characters who were actually worth caring about. Minari has everything that Ron Howard’s failed Oscar bait was lacking, and it’s all the better for it; for one, Lee Isaac Chung’s writing and direction allows for lots of room for its characters, from the main family to some supporting characters like a strange religious farm hand that Jacob brings on board, to breathe and develop their unique personalities without once feeling like caricatures or anything that rings false. You feel the family’s connection to each other and other members of their small Arkansas community, who themselves don’t seem to come with any racial prejudice towards the Korean family in a thankful twist (the closest they come to delivering such comments is more out of plain ignorance than deeply-rooted racism), because Chung’s humanity shines through at all times in both his sweet, funny and sometimes heart-breaking writing, and his soft, gentle and mindful direction, which gives these characters and plot points some real weight as well as a hefty sense of realism.

Chung’s impressive ensemble cast of predominantly Korean actors also contribute greatly to the film’s warm soul; while The Walking Dead alumni Steven Yeun and prolific South Korean actress Han Ye-ri (in her American feature debut) are both excellent as the main figureheads of this family, it’s really the oldest and youngest members of the on-screen clan that leave the biggest impression. Youn Yuh-jung, considered a film and television legend in her native South Korea and, like Ye-ri, also making her American feature debut in Minari, is delightful here as the feist and occasionally foul-mouthed grandmother who puts Glenn Close’s similar character from Hillbilly Elegy to shame, in a performance that’s far from showy and able to elicit a wave of emotion from a single facial expression that sometimes requires no dialogue. Then, there’s young Alan Kim, who is extremely believable as the curious boy whose eyes we’re seeing everything unfold from, and the eight-year-old actor brings a wonderful feeling of innocence and optimism – as well as the occasional bit of naughtiness; just wait until you see what kind of prank he pulls on his unsuspecting grandmother – that is bound to give him a healthy and sustainable career in the future.

Even in some of its more upsetting or darker moments, the film retains a strong heart and uplifting tone because you really do believe in these characters and their plight, and it sets a good example of on-screen family and community that feels genuine and dutiful. It’s won over hearts of all kinds, and more than likely it’ll win over yours as well when you finally get to see it, because it contains so much goodness in its soul that the cup sometimes threatens to tipple over, but miraculously none of it really trickles and you’re left with a pleasantly refreshing family film that’s certain to be a standout in the awards season crop.

Hopefully, this along with Parasite can bring Korean cinema much further into the spotlight, because there’s plenty more treasures to export directly from the peninsula and share with the rest of the world.

Minari is a wonderfully sweet-natured family drama that writer-director Lee Isaac Chung crafts with strong love and care for his plot and characters, played excellently by a predominantly Korean ensemble cast, which gives it an enormous amount of heart that provides an uplifting and refreshing tone throughout.

Minari is currently scheduled for a UK release on 19th March 2021 (as of publication).