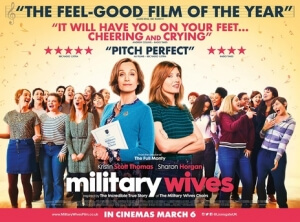 BASICALLY…: The wives of soldiers serving in Afghanistan come together to form a choir…

As much as people like to bemoan certain movies for sticking a little too closely to well-worn formulas and tropes, there is no doubt that audiences still have a healthy appetite for them. Take last year’s Fisherman’s Friends, for example; the film itself was a collection of crowd-pleaser clichés rolled into one, but that didn’t stop the film from becoming a small box office hit in the UK, out-grossing the likes of Men In Black: International and Terminator: Dark Fate with its meagre but reasonably impressive £7.4 million gross.

The same fate can and probably should be expected for Military Wives, which like Fisherman’s Friends is nothing that you haven’t seen before, but at this point who really cares when it’s throwing about that feel-good charm like it’s bird seed?

Inspired by real life (because it wouldn’t be feel-good if it wasn’t based on some part in reality), we follow the numerous partners of soldiers who are left behind to pass the time until their other halves return after being deployed to Afghanistan. They soon decide to start a singing group, which ends up being led by the uneasy partnership of Kate (Kristin Scott Thomas), the uptight and cold wife of a Colonel (Greg Wise), and the more laid-back Lisa (Sharon Horgan), and soon the women form a strong bond linked by their voices and good nature.

It’s a film that knows exactly what it is – a movie designed to put a smile on the faces of its audience – and runs with it, keeping itself firmly in its comfort zone without saying or doing anything too challenging, and knowing just when to steady itself before getting too carried away. The humour is light, so much so at times that it barely touches the ground, and the drama is greatly amplified to disguise how the stakes are pretty minimal (seriously, the biggest conflict in the movie revolves around a song lyric). It’s got basic dialogue, characters that are largely – and literally – one-note, and plot beats that don’t even try and hide how formulaic they are.

Does that make it a bad film? Not necessarily, but it does make it an overly safe one, and if that’s all that you’re after when it comes to a night out at the pictures then you’ll get exactly what you pay for. For others, the harmlessness of it all might be a little too much to bear; you’ll spend a lot of it thinking about other movies which this one feels like just another version of, whether it’s Calendar Girls or Pride or even Fisherman’s Friends, or perhaps the granddaddy of feel-good Brit flicks The Full Monty, whose director Peter Catteano also made this film. As it is here, the formula was all over those other films, but some of them like The Full Monty and Pride actually made efforts to step out of their comfort zones and add new dimensions to a plot that outdates even The Full Monty, whereas Military Wives doesn’t make as much of an attempt to branch out. It is far too comfortably wrapped up in its security blanket to develop its plot or characters beyond the basic requirements of each and every one of them, which not only prevents it from having any sort of bite to it but also gives it a rather flat feel which doesn’t spring as much to life as it had hoped.

However, there are moments when you can spot elements of something profound, even if it’s just for a scene or two. Since this is a film about people whose partners are all off fighting in overseas conflicts, there is bound to be tragedy at some point, and when it hits there is a sizeable impact. The very psychology of being a soldier’s wife is explored a little bit here, with some characters treating incoming phone calls or ringing doorbells like they’re about to receive the worst news possible, and when it does inevitably happen to someone it is treated with humility and humanity. Unlike the rest of the film, which feels like a blueprint for an undeveloped sitcom half of the time, these scenes are appropriately treated with great seriousness, and are acted so well that you actually do feel a little something for their predicament. It’s in these moments where it is evident that there is something worth mining for in this material, which makes the fact that it does play it so safe most of the time even more frustrating, because there is clearly a powerful movie buried somewhere within the soft and inoffensive surface yet the filmmakers haven’t bothered digging a few more metres down.

Again, none of this means that the film is necessarily bad, it’s just that it’s made for a particular audience that doesn’t like to feel too challenged or offended by most things, and that’s perfectly okay. It’s the sort of movie that you’d take your middle-aged parents or your even older grandparents to go and see, particularly if they too are involved with some sort of local choir, and odds are that they will enjoy the movie more than anyone looking for real substance. This isn’t the kind of movie to go into expecting to get something meaty out of it, but more the kind where you can easily go to as a mere distraction for a couple of hours, and while you might forget about it shortly after seeing it, you’ll at least be thankful that your time was wasted on something that wasn’t offensively bad, but not all that great either.

It’s perfect for a slightly older audience, but those wanting something more challenging won’t find much to sing about here.

Military Wives doesn’t stray too far from the crowd-pleasing underdog formula, which although not bad is perhaps a little too safe for audiences wanting something with more substance, but anyone wanting to watch a harmless feel-good movie will get exactly what they expect from it.

Want to decide what the movie’s like for yourself?
Check out Military Wives showtimes in London
via