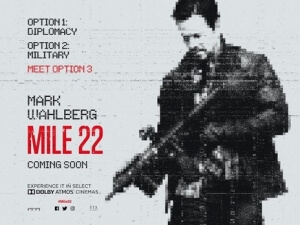 BASICALLY…: James Silva (Wahlberg) leads a covert team on a dangerous mission to transport a highly valuable asset (Uwais) to a plane going out of the country…

Up until now, the pairing of star Mark Wahlberg and director Peter Berg – in a combination I’m legitimately surprised nobody in the press has yet dubbed WahlBerg – has usually resulted in some high standard action-thriller movies; Lone Survivor was intense and extremely well executed, Deepwater Horizon was a fascinating experience filled with real dread and human disaster, and Patriots Day was a firm and focused re-enactment of a very dark moment in modern terrorism. All of those films were solid proof that WahlBerg (as I am now calling the two, because apparently nobody else will) could be a reliable force for delivering movies of its kind that are higher in quality than the norm.

The same can most certainly not be said for their fourth collaboration together, the mindless and appallingly obnoxious Mile 22 which takes all the hard work that they put into making their other films together and wipes its dirty, hairy arse with it like a wet-wipe before then throwing its faecal contents right at us, in case they figured we hadn’t suffered enough as an audience.

Seriously, this is not only the worst film that WahlBerg have made together, but it’s easily one of the worst films that either Mark Wahlberg or Peter Berg have been involved with in quite some time; it’s by far Berg’s worst movie as a director, with even Battleship (as undeniably awful as that movie was) being more tolerable than this dreck, and Wahlberg has somehow managed to find a way to be even more hateable than he was in Pain & Gain. I’ll get more into specifics shortly, but this was unbearable to sit through for me; it’s films like this that just leave my jaw wide open that this movie and the decisions it makes were able to be made and projected onto cinema screens, not to mention that genuine talent was brought on board to make such an ugly and incomprehensible trainwreck of a movie.

Plot-wise, and I really am struggling to try and find a way to simplify it because it’s all surprisingly quite complicated, Wahlberg leads a team of covert special forces agents who are called in to handle certain situations when all other options fail. At their base in Southeast Asia, they are assigned a mission to transport a local cop (The Raid’s Iko Uwais), who holds valuable information regarding the whereabouts of some stolen caesium, to a plane to take him out of the country in exchange for a code. En route, they are repeatedly attacked by corrupt Indonesian government operatives who try and stop them from making it to the plane, and blah blah blah people get shot, blah blah blah explosions, and it’s all just a whole load of blah.

The transporting-the-criminal-to-the-plane aspect of the plot actually doesn’t come in until around the halfway mark, and unfortunately until then we are stuck with some shocking excuses for characters, all of whom are vulgar, mean-spirited douchebags who nobody in their right frame of mind would consider them to be the best of the best, because they’re just a bunch of aggressive and anger-prone jerks. There’s not a single person who we’re meant to be rooting for that is in any way sympathetic or even level-headed; they are so hot-headed and machismo in everything they say and do, from the aggressive language they exhale like normal breaths to the pseudo-intellectual bollocks that Wahlberg mumbles during the film’s haphazard framing device, that you can just feel the testosterone and over-usage of steroids clouding every single scene. Wahlberg is by far the biggest monster of them all here, because he’s constantly aggressive to people even when they’ve done nothing to intimidate him, screaming at and bullying lowly tech people while they’re just trying to do their jobs, and if that doesn’t already make him extremely annoying and punch-able then his character trait of fidgeting with a snap bracelet every other second is bound to push you over the edge (it’s implied that he has a severe attention disorder, but that’s still not an excuse for him to act like a cock for the entire running time of this film). I wasn’t kidding earlier when I said that this was the most I’ve hated a Mark Wahlberg character since Pain & Gain, but that film – as dreadful and unwatchable as that was – you could chalk down to how it’s just the typical Michael Bay direction that he was given, whereas this was made with a director that he’s more than comfortable with and has even done some of his best work as an actor with, so I have no idea why he or Berg thought that making a film this obnoxious and downright unpleasant, with a lead character who is exactly those things and more, would be a good idea.

Talking of the director, I wasn’t joking either when I said that this is a worse Peter Berg movie than Battleship, because again while that movie is terrible and every single criticism of it is entirely warranted, you could tell that it was a movie he was contractually obligated to make by the studio (and I believe he’s gone on record once or twice to virtually confirm it), whereas there is not such an excuse for this movie. I can’t fathom how Peter Berg, who recently has made some truly great movies like Deepwater Horizon, could make a film that is so beneath him in every single way, and bring it to life with some of the worst editing I’ve seen for a major Hollywood film since last year’s King Arthur: Legend of the Sword; there is not a shot in this film that lasts more than five seconds, and it moves the film along at such a breakneck speed that it’s impossible to stop and comprehend what in holy hell is actually happening, which itself is made even more difficult by some truly nauseating cinematography that can’t keep the camera still to save its own skin. It’s borderline unwatchable as an action movie, with editing and camera work that calls back to the likes of Taken 3 and A Good Day to Die Hard (and, if you know those movies, not at all in a good way), and some of the most appalling dialogue you’ll hear in a movie all year, where apparently consonants and abbreviated sentences just do not exist.

Everybody involved with this movie deserves better, including Uwais who is largely wasted in a role that barely puts his skills as seen in the Raid movies to good use most of the time, and especially WahlBerg who are both, as we’ve seen in the past, capable of so much more together than this absolute middle-finger of a movie.

Mile 22 is an aggressive, obnoxious and completely unpleasant action movie filled with hateful characters, horrific editing and cinematography that makes the film barely coherent. Both Mark Wahlberg and director Peter Berg can do, and have done, better.