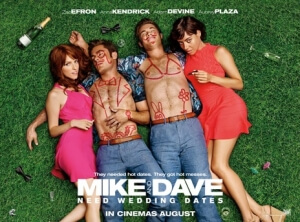 BASICALLY…: In an attempt to behave for their sister’s wedding, brothers Dave (Efron) and Mike (DeVine) try to find two sensible women to be their dates – and end up with hard-partying slackers Alice (Kendrick) and Tatiana (Plaza)…

Like so many former Disney stars trying to distance themselves as far away as possible from their earlier career choices – we like to think that by this point, they’ve formed a support group where they meet every now and then to play poker or something – Zac Efron seems to have been desperate over the last few years to assert himself as the new go-to person for raunchy studio comedies. To be fair, the guy does have strong comedic timing with on-screen charisma to spare, but more often than not he’s let down by scripts that ultimately have little identity outside of being as sex-crazed and generally douchey as possible (the Bad Neighbours movies are good examples of this, and the less said about Dirty Grandpa the better).

It may not come as a surprise, then, to know that his latest outing Mike and Dave Need Wedding Dates is yet another one of these movies. Is it the worst that Efron has been involved in? Absolutely not (again, Dirty Grandpa exists). As you might have guessed, though, it’s nothing worth shouting from the rooftops about, either.

Efron is the Dave of the title, while Adam DeVine is Mike; they’re two brothers whose wild antics at several family events have led them to be forced into bringing sensible wedding dates to their younger sister’s (Sugar Lyn Beard) forthcoming nuptials in Hawaii. Their initial advert on Craigslist soon goes viral, and soon attracts the attention of slacker friends Alice (Anna Kendrick) and Tatiana (Aubrey Plaza) who, after a series of failed jobs and, in Alice’s case, being abandoned at the altar, decide that they need this trip to clear their heads. Posing as straight-laced and respectable women, they soon attract Mike and Dave’s attention, and before you can say “What transition?” they’re all in Hawaii for the wedding where hijinks inevitably ensue.

It’s exactly the kind of film you would expect to see with this type of set-up; a lot of filthy one-lines combined with constant ad-libbing and more than one risqué visual joke, with some sort of heartfelt lesson or moral thrown in to show its audience that it’s not all bad. There’s nothing wrong with any of that, as long as it’s executed well enough, and there are definitely moments in this film that do raise a chuckle thanks to the sheer delivery and timing from some of its actors. However, feature debut director Jake Szymanski – whose previous credits include a chunk of Funny Or Die videos and the TV movie tennis satire 7 Days In Hell – is not only working from a predictable and standard script, but paces and frames every scene as though they’re a bunch of different shorts loosely strung together to make as cohesive a narrative as possible. Even for a film such as this where the comedy needs to be front and centre, its sloppy structure can seriously undermine the humour when it’s all so slap-shot and sporadic, especially in the editing when in some over-the-shoulder shots you can see actors’ lips not syncing up with the overlapping dialogue. The comedy is already hit-and-miss, but you can clearly tell that this is all being directed by someone who is rather inexperienced with feature filmmaking, which makes it sadder that the laughs aren’t stronger than they should be.

That being said, when the film does deliver a solid comedic line or moment, it’s enjoyably silly to watch, and we really do think that’s because of the people they brought in to perform them. Efron continues to show a strong comedic flare that we wish he had a better script to work with, while we swear that with every obnoxious performance he gives DeVine is starting to transfigure himself into Jack Black; but it’s the ladies who shine brightest, with Kendrick being as adorably aloof as ever and Plaza generating some of the film’s funniest scenes in a role that’s never as embarrassing as the one she took on in Dirty Grandpa (just be thankful she’s not lusting after Robert De Niro in this one).

But despite their clear talents, none of them are truly strong enough to elevate the material that ultimately bogs Mike and Dave Need Wedding Dates. Once again, it looks like Efron is in raunchy-comedy limbo, and here’s hoping he’s finally given a script that allows him to fully flex his comedic muscles as well as his actual ones.

Mike and Dave Need Wedding Dates benefits from a strong lead quartet of comedic actors, particularly Anna Kendrick and Aubrey Plaza, but even they are ultimately let down by a predictable and surprisingly safe script that’s further marred by a sloppy and unfocused set of direction by someone who is clearly new to the whole feature filmmaking process.