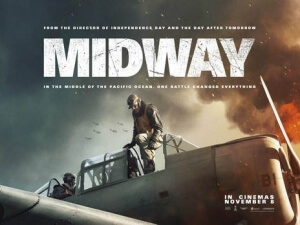 BASICALLY…: During the Second World War, the US Army clashes with the Japanese forces in the middle of the Pacific Ocean…

It takes real talent to make you not care an ounce about actual war heroes, but somehow Roland Emmerich manages it with a film that manages to both leave you utterly disinterested in not just a momentous clash between international armed forces, but also the soldiers who fought valiantly during it.

Essentially to Emmerich what Pearl Harbor was to Michael Bay – albeit with far less romantic sub-plots and absolutely no Cuba Gooding Jr. around to steal the whole movie – Midway focuses on the early stages of America’s involvement in the Second World War, kicking off in 1941 when Japan attacks the US naval fleet at the Hawaiian post. As America swiftly enters the war immediately afterwards, our focus shifts to numerous perspectives; there’s members of the US Navy’s aviation fleet including Lts Dick Best (Ed Skrein) and Wade McClusky (Luke Evans); there’s the Washington types such as Admiral Chester Nimitz (Woody Harrelson) and Edwin T. Layton (Patrick Wilson) whose job it is to determine the Japanese Army’s next move; there’s numerous other historical figures such as Colonel Jimmy Doolittle (Aaron Eckhart) who led an air assault on Tokyo; and there’s even a few scenes spent with the Japanese forces as they plot their own attacks against their enemy. It all leads to an eventual naval and aviation showdown during the Battle of Midway, which would prove to be a turning point in the Pacific Ocean theatre during the Second World War.

That all sounds well and good. The problem is, though, you just don’t care.

Emmerich, who works from a script by Wes Tooke, cannot make any of these events and especially the characters functioning within them feel at all worthy of your investment, because they are all so by-the-numbers and bland that it leaves you so disinterested in what should be a fascinating piece of war history. Instead, it is needlessly complicated, to a point to where you’re actually struggling to keep up with what’s going on unless you’re already knowledgeable about these events before going in (which, let’s be honest, a lot of people really won’t be), and its lengthy running time of just over two-and-a-quarter hours can be felt during several junctions, because there is nothing to really grab your attention during any of it. It mostly just jumps from one perspective to another, without a clear focus and way too many sub-plots going on to let your mind take it all in at face value, and when things do get a lot more action-packed it’s coated in such blatant (and rather terrible) CGI that makes it feel like a cartoon half the time, and takes you right out of the moment you should be experiencing instead.

You’re not taken by the sluggish way this story is being told, and definitely not by the cardboard characters that Tooke unfortunately writes them all to be; nearly everyone in this movie is comprised of war movie clichés and wafer-thin development, wasting a perfectly good cast of character actors like Patrick Wilson, Woody Harrelson, Dennis Quaid and Aaron Eckhart who are saddled with stock roles that anybody could have played with no difference being made. Unfortunately, a lot of the movie hinges on Ed Skrein, who has been fine in other things (mostly when he’s been in supporting roles) but as we learned from The Transporter Refuelled he does not have the charisma or screen presence to be a movie’s de facto lead. Here, the actor fails to convince that he is not only the Maverick-type leader who brings his squadron of pilots into battle, but that he is an all-American hero like he was in real-life thanks to a ridiculously fake accent that’s the epitome of “British actor trying way too hard to sound American but ironically makes him sound more British.” Like many of the real-life figures depicted in this film, there is no doubt that this guy is a true hero, but the film does him and others a disservice by having him be portrayed in such a flat, uninteresting way that it diminishes his actual achievements during the war.

Let’s just call the movie for what it is: this is just Roland Emmerich trying to out-do Michael Bay’s Pearl Harbor by inserting his own tropes – big effects-heavy action scenes, starry ensemble cast, global scale, a nerdy character who wears glasses and is always right about stuff – in the hopes that it will at least make it more entertaining. However, say what you will about Pearl Harbor, but that movie at least has moments of pure thrill, with effects that look far superior to the ones in this movie which was made today; Midway doesn’t really have any of that, it is just a bland, uninteresting, and even boring war epic which fails to make audiences care about a real-life event that changed the course of the conflict, and especially not about the countless people who risked their lives to ensure victory in a free world.

That being said, like any Emmerich film it is bound to find an audience – hell, I know people who have said that The Day After Tomorrow is their favourite movie – so in that regard I’m glad it will have at least one person who likes it. Sadly, I am not that person.

Midway is a bland, sluggish and not very entertaining war epic which fails to grasp the importance of the titular WW2-era battle nor of the people who took part in it, many of whom are portrayed as such cardboard cut-outs that it makes you not care at all about actual war heroes.

Want to decide what the movie’s like for yourself?
Check out Midway showtimes in London
via