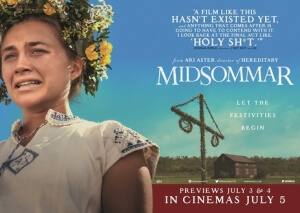 BASICALLY…: A group of college students attend a once-in-a-lifetime Swedish festival where things soon get disturbingly out of hand…

Although last year’s standout horror Hereditary received a healthy amount of critical acclaim, audience reaction wasn’t quite as glowing; if you look at the film’s Rotten Tomatoes page, you can see the sizeable difference between its 89% critics’ rating and the 64% audience rating, the latter being just five numbers away from a “rotten” label. It’s clear that while the movie certainly had the majority of critics buzzing – including me, who even found a place for the film on the end-of-year Best of 2018 list – the general movie-going public just couldn’t wrap its head around its mature and disturbing nature, a far different tone than what most people are used to when seeing a horror film.

However, there is no doubt that writer-director Ari Aster’s second film Midsommar, however, is set to become even more divisive. I know this, because the audience I saw this movie with was left in an utter state of confusion and disappointment as they were exiting the auditorium, which (again) is a vast contrast to the critical feedback that seems to be mostly positive (though noticeably not quite as much as Hereditary). I also know this, because the movie is a very strange experience that I can easily see a lot of people being turned off by, not just because of its surreal and completely barmy imagery, but also because it’s a meandering, slowly-paced and often not very focused arthouse horror that’s perhaps a little too wrapped up in its own style to actually deliver a satisfying narrative with the set-up that it has.

It starts out fairly straight-forward: Dani (Florence Pugh) is in a relationship with fellow college student Christian (Jack Reynor) which appears to be running on fumes – he’s emotionally detached from her anxiety-driven needy nature – until a truly tragic loss on Dani’s part pretty much forces them to stay together. He awkwardly invites her along on a trip with his friends Josh (William Jackson Harper), Mark (Will Poulter) and Pelle (Vilhelm Blomgren) to Sweden for a pagan festival that only occurs once every ninety years, despite it being clear that their relationship is on the verge of collapse, and once they arrive and become accustomed to the secluded village’s bizarre way of running things, everything starts to become undone – and that’s meant to describe the events within this movie, as well as the movie’s narrative itself.

Like Hereditary, this is a movie that is dealing heavily with grief and loss, with Dani struggling to cope with the incredibly upsetting inciting incident that precedes the opening credits, and for a short while it seems like Midsommar is going to continue down this path and present a very disturbing account of these particular emotions, just as Aster’s previous movie did. However, somewhere around the 1 hour mark of this 140-minute movie, all of that just kind of gets tossed to the side to make way for the increasingly strange traditions that these townsfolk like to implement for this extremely rare festival, and it is also around this point where the style more or less takes over from the actual narrative, as the bright and ominous cinematography as well as Aster’s carefully calculated direction begins hogging the spotlight from everything else. It is a very well-done style, one that’s undeniably gorgeous to look at, not to mention how sinister it can make the most innocent of imagery seem at times, but when that is all the movie turns out to be, when it should also be dedicating some time to developing the story as well as its characters, it begins to test your patience a little bit. After a short while, you’re anxious to know more details about what some of these characters are going through on a more personal level, especially Dani who again is being reminded left and right of the horrific tragedy she goes through at the film’s beginning, but it’s frustrating because all of that rich character and plot development has been effectively halted so that the film can relish in its own surreal nature for the remaining hour and twenty minutes of its running time.

Despite its noticeable meandering nature, it’s not a film that leaves you feeling entirely bored. This festival and the cult that runs it is so strange and out-there that you are constantly curious about where this movie is leading you, so there is an element of intrigue still there in the sense that you simply have to know what in the holy hell is going on, even if it means sitting through a series of sequences that tend to go on for way longer than they ever needed to, and experiencing visuals that are straight out of a drug trip from Fear and Loathing in Las Vegas. The acting too is solid enough that you’re still interested in some of these characters, despite the script often not giving them the satisfaction of being fully fleshed out; Pugh is especially strong here, as she has scenes that call for her to have some pretty intense emotional outbursts that work because she is such a good actress that she can make those rather difficult moments of acting seem relatively easy. By the time the film does reveal where it’s been leading you this whole time, though, it feels somewhat anti-climactic; it’s nowhere near as out-there or even as disturbing as all of the build-up had been suggesting it would be, and it simply makes you think of another certain movie (or two versions of said certain movie, for better or worse) that did this kind of ending in a much more effective and provocative way.

I would say that it doesn’t matter because the journey towards it was worthwhile enough, but even that is somewhat debateable; while there’s no doubt that this is a very stylish movie, it sometimes overshadows all of the other necessary tools such as story and character, which makes it a pretty but rather empty sophomore feature from a horror director who clearly knows his craft, but needs to step away from his own ambitions a little bit.

Midsommar is a stylish arthouse horror that, despite some very strong production values such as its bright cinematography, calculated direction and strong acting, lacks the substance to carry itself throughout its overlong 2+ hour running time as its story and characters are largely side-lined to make way for some pretty but rather empty visuals.

Check out Midsommar showtimes in London
on Walloh.