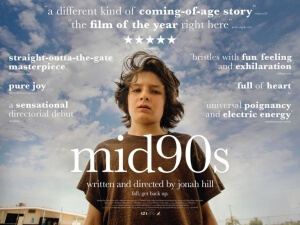 Like the young’uns in Mid90s, I too was a child during that era, although significantly younger – about 3 or 4, to be exact – and most definitely not as into skateboarding culture, not to mention drugs and alcohol and swearing like sailors, as these kids are. But while I can’t say that Jonah Hill’s feature writing-directing debut is an accurate reflection of my own experiences around this particular time period (I was way more busy learning to read and watching endless amounts of Barney videos), it’s still very easy to see how it could be interpreted as something meaningful for the slightly older crowd, like some sort of nostalgic journey back to a time when video game cartridges could be used as currency, skateboarding was the most “in” thing since breathing, and renting a movie from Blockbuster Video was an eventful pastime.

The nerd in me likes to think that Captain Marvel is happening at the exact same time as this movie, if only because it thrills me to no end to think that somewhere in Los Angeles, while Carol Danvers is teaming up with Nick Fury and Goose the cat against the Skrulls, a young 13-year-old boy is hanging out with a group of carefree skateboarders, drinking and getting high to pass the time.

Meanwhile, the film critic in me has a great amount of respect for Hill’s vision, as with his debut feature he’s managed to capture a very naturalistic, almost documentarian, portrait of an era and its youthful attitude that’s fascinating to watch, and sets Hill up as a surprisingly impactful storyteller who can handle rough themes and topics with a firm but gentle grip.

Set in Los Angeles at some point during the mid-90s – the year itself is never fully revealed – 13-year-old Stevie (Sunny Suljic) lives with his young mother Dabney (Katherine Waterston) and his abusive older brother Ian (Lucas Hedges). He soon comes across a small group of skateboarders hanging out around a skate shop and begins hanging out with the young delinquents – some of whom have names I can’t even repeat on this site – getting into drinking, drugs, smoking, sex and dangerous skateboarding stunts in the process.

The movie is basically just a small collection of misadventures this young boy has with this slightly older group of guys, while also dealing with his home life that includes having to deal with his aggressive brother and a sense of disconnect with his mother. It can, at times, feel a little episodic; one scene will focus on the characters just skating around and having conversations with each other, and another will see them get drunk and high, and even scoring with girls, at a party. However, Hill makes it all feel so natural and loose that it really is more like looking at documentary footage than dramatized content with actors saying lines of dialogue; of course, being an actor himself – a twice Oscar-nominated one at that, a fact that will never cease to amaze me – Hill doesn’t especially have a difficult time getting good, strong, and even funny performances out of his largely-unknown cast, and his calm and mellow direction gives off the vibe of a Richard Linklater or Kevin Smith film from (where else?) the mid-90s.These performances, and the way that Hill both captures them and conducts them in his direction and writing respectively, are stunning in how realistically they are executed, not once giving off a phoney Hollywood vibe but instead capturing a very real, unapologetically gritty portrait of this time and place that’s so clearly vivid in Hill’s own memory.

I’ve seen this movie be compared by some people to Larry Clark’s controversial film Kids – funnily enough, also released somewhere around the mid-90s – and you can certainly see why; it doesn’t shy away from images of young people – as young as about 13 or possibly even 12 – cursing up a storm, swapping racist and homophobic remarks like they mean nothing, smoking whole cartons of cigarettes, downing entire bottles of booze, getting high on a combination of marijuana and ADHD medication, having sexual experiences with girls, getting into heavy fist fights, sustaining major head injuries after falling from rooftops, and even trying to strangle themselves with the cord of a Nintendo controller. Obviously, it doesn’t become anywhere near as shocking and depressing as Kids, but even so for a film like Mid90s to still go out of its way to show these unsettling images of children doing these acts, in an era where hardly any of these things are considered to be normal anymore (mostly for the better), is still pretty ballsy and provocative, so at the very least Hill should get a huge amount of respect from not shying away from any of this stuff for the sake of a more PC audience in these modern times.

The film is likely to not win over everyone, as beyond some of its unsettling juvenile behaviour it does have a rather loose format which makes it feel slightly disjointed, sometimes to a point to where you’re not entirely sure if you’re nearing the end of the movie or just getting started with it; where it does end feels like an abrupt full-stop, at least in comparison to the types of storytelling we’re used to. However, I have a sneaking suspicion that anyone who was old enough to remember this period of their youth will have a blast watching it being lovingly recreated in such a natural and provocative way, and those who don’t can still appreciate Hill’s vision and approach to themes and topics that would raise utter hell in this day and age.

Mid90s is an intriguing look at a certain era of youth culture that’s sometimes provocative and unsettling in its stunningly realistic depictions of juvenile activities, but writer-director Jonah Hill gives it a natural and documentary-like feel that gives it a life of its own that most people can admire.