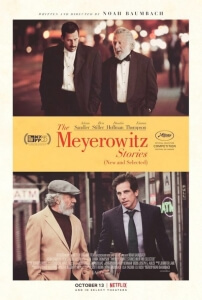 BASICALLY…: An estranged family reunites to put on an event celebrating the artistic work of their father (Hoffman)…

Family dysfunction doesn’t get any more dysfunctional than the Meyerowitz household, the latest set of neurotic and deeply troubled characters in writer-director Noah Baumbach’s newest film, and one sitting with them is all you need to see the severe cracks in their foundation as a unit and as individual people, something that could either make or break your own personal enjoyment of this bittersweet odyssey, but will always contain something to at the very least grab your attention.

Split into segments, we follow the lives of the grown-up children of Harold Meyerowitz (Dustin Hoffman), a retired New York sculptor with a remarkably high opinion of himself, and almost no regard for anyone who isn’t him. His eldest son Danny (Adam Sandler) has moved in with Harold and his latest in a long line of wives Maureen (Emma Thompson) after he separates from his own wife, and is about to see his filmmaker daughter Eliza (Grace Van Patten) head off to college. Meanwhile, Harold’s youngest son, and Danny’s half-brother, Matthew (Ben Stiller) has long since moved to LA and become a successful accountant, and upon returning to New York to meet with his father starts to see the vibrant narcissism that drove him away. Finally, there’s their quiet and unspoken sister Jean (Elizabeth Marvel) who’s more than comfortable not getting too involved with a lot of things her family set themselves up for, but that’s not to say she’s not battling her own demons as well. These estranged siblings eventually come together to organise an exhibition of their father’s sculpting work, while dealing with how they feel their lives to be utter disappointments thanks to Harold’s rather condemning attitude as a parent.

In keeping with a lot of themes that Baumbach seems to include in most if not all of his movies, The Meyerowitz Stories (New and Selected) has neurosis to spare, as well as a fast-paced and quirkily intellectual script that throws dialogue back and forth more than Tommy Wiseau throws a football. There’s definitely a feel of Wes Anderson’s The Royal Tenenbaums in this movie’s inspiration, not least because it also co-stars Ben Stiller, but it also deals with a rather pressured and self-defeating set of family values, brought about by a monstrously self-absorbed patriarch. Baumbach uses that dynamic to paint – or in this case sculpt – an entirely absorbing and even a little abstract representation of people with severe confidence issues, and how their family is the one thing that keeps them firmly stuck together, whether they like it or not. His quirky sense of humour is definitely apparent, but so is his flair for the melancholy, especially as we see people like Matthew be confronted for virtually abandoning his artistic family and even his own artistic promises for a career in something that does not seem to fit the family reputation. It’s all tied up fairly neatly in a set of loosely connected vignettes that hint at a serious love for their upbringing, even if they don’t feel it to have been in the slightest bit useful.

Everyone performs exceptionally well, including Stiller in his most emotional role in years, as well as Hoffman who even nowadays can’t seem to fail to get a much-needed laugh even when playing the most unappealing of people, but this is the rare case when one can safely declare that Adam Sandler is the MVP of this movie. It’s easy to criticise him for his choice of movies over the last few years, but when he’s cast in that rare straight-forward role, whether it’s something like this or Punch-Drunk Love or Funny People or even Reign Over Me, he shows that he can be a strong emotional actor. Here, he’s the heart and soul of this family that is this close to not even having one, as this guy who knows his father is a bit of a bugger but loves him too dearly to actually stand up for himself, and you sympathise with him as he not only faces constant ridicule and back-handed compliments from his stubborn dad, but as he also prepares as his daughter is both leaving for college and is making a series of experimental and almost pornographic films that set even him back a little bit. One wishes that these were the kind of films that Sandler did far more often, but when the rare occasion arises like it has done this time, then his genuine acting talent is more than welcome.

As with every Noah Baumbach movie, it’s not for everyone and it would not be too hard to understand why this wouldn’t be someone’s cup of tea, but it’s a fascinatingly quirky movie with a lot of heart, and a whole heap of snarky cynicism to balance it out.

The Meyerowitz Stories (New and Selected) is a fascinatingly quirky movie with a family that has as much dysfunction as the film has heart, and includes a standout performance by Adam Sandler which he really should try and do more often.