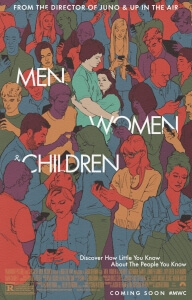 BASICALLY…: A sexually-starved couple (Sandler and DeWitt), a fame-obsessed teen and her mother (Crocicchia and Greer) and a pair of romantic teens (Elgort and Dever) all struggle with their personal interactions in the rising age of technology…

What the hell has happened to Jason Reitman? It seems that after his multi-Oscar nominated Up In The Air, the filmmaker and son of Ivan (Ghostbusters) has not been reaching up to the standards set by that film, or earlier offerings Juno and Thank You For Smoking. For example, does anyone even remember Labor Day? Or Young Adult? And we doubt that anyone will remember Men, Women and Children either – and if they do, it’ll be for the wrong reasons.

A bizarrely bad film in almost every manner of the phrase, it understands little about what it’s talking about yet it thinks it’s saying something grand and spectacular about our current living state as human beings. Bookending the film, to demonstrate our point, are a few images of the Voyager I satellite floating through space while Emma Thompson’s bored narration prattles on about how it observes life and pieces of human culture or something like that, you’re honestly too uninterested enough to care. Reitman, who co-wrote the script with Erin Cressida Wilson, obviously wants to say something here but the message is either conveyed poorly or too strong-fisted it almost feels like a punch in the face.

This also comes across, sadly, in his direction; there are scenes with large crowds of people all focused on their touch-phones and devices and doing nothing else, as if Reitman thinks the audience doesn’t understand the core message of how technology is becoming a sharp divide in our basic sense of communication. This even occurs in the scenes set in school hallways, which doesn’t seem true for a second (either things have severely changed since this reviewer was at school, or their gadgets would have been confiscated or been put away after a teacher’s nagging session). There’s no rhythm to it, and it ends up making everything as artificial as the data we constantly check every now and then.

Perhaps even worse, Reitman chooses to focus on characters that don’t seem human in the slightest. Not Shyamalan-bad, but nowhere near resembling anything of Earth origin either. According to this film, horny teenage boys have no problem harassing popular girls via intimate text messages without facing the social consequences; grown men willingly use their sons’ laptops to browse and – even more disturbingly – pleasure themselves to pornography; and, perhaps the worst offender, prudish mothers can observe and control their daughters’ social lives like a mix between a hawk and a prison guard in Nazi Germany. The latter concerns Jennifer Garner’s spectacled witch of a character who, under the illusion that she’s protecting her daughter (Kaitlyn Dever), operates regular online checks on her computer and, at one crucial moment, even chats to another character posing as her daughter and telling them where they can go. Not even the film sides with her, in one of the few moments it actually displays logic, and rightfully so; if you’re a teenager in a similar situation with your parents, you have our sympathies because no-one, not even if it’s to supposedly protect them from online predators, should stomach this sort of treatment by members of their own family.

Garner’s sub-plot is one of the many that the film attempts to juggle, including the separate affairs committed by a married couple (Adam Sandler and Rosemarie DeWitt), a stage mother (Judy Greer) openly supporting her teenage daughter’s (Crocicchia) racy online quest for fame, a blossoming romance between Dever and Ansel Elgort’s saddened ex-football player, and a bulimic cheerleader (Kampouris) desperate for the attention of an uninterested boy she has a crush on. Oh, and there’s also Dean Norris, as Elgort’s father, attempting to court Greer, and Greer’s daughter flirting with the porn-obsessed son of Sandler and DeWitt for whatever reason. Oh yes, and every so damn often we cut back to that obscure satellite in space. There’s a LOT that Reitman has to cram in here, with some balancing out fine and others being so transparent they might as well have been removed for time. All of these plot threads can make it heavily unbalanced and can lose its focus from time to time, which is bad for the message that Reitman obviously wants to convey but for whatever reason can’t.

If there is one thing we can say that’s good about it, it’s the acting. Despite the lesser material, all of the ensemble give it their best anyway and come out with some shred of dignity at the end of it. Particular stand-outs are Dever, who after scene-stealing roles in Short Term 12 and Say When once again proves she’s a charismatic talent to watch, and Adam Sandler – yes, despite infuriating the world with his low-brow Happy Madison films, Sandler has proven over time and with certain projects that he can be a decent dramatic actor such as with Punch-Drunk Love and Funny People, and his subdued performance here is no exception. Everyone else, from Greer to Norris to Elgort to even Garner, does fine, and there is even fun to be had listening to Emma Thompson say out loud the title of one particularly graphic porn video at one point.

But like that damn satellite, Men, Women and Children is floating endlessly in nothing, millions of galaxies away from something comprehendible or even good from the mind of Jason Reitman.

Men, Women and Children is a bizarre mess, cramming a ham-fisted message about modern-day technology down our throats with some particularly loathsome characters, and despite fine acting (especially from Adam Sandler and Kaitlyn Dever) never amounts to anything other than a tedious, pretentious social commentary about our current social lives.