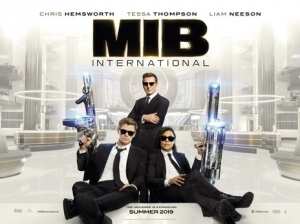 BASICALLY…: Two agents for the Men In Black (Hemsworth and Thompson) head on a globe-spanning adventure together in order to protect the planet from a potential alien attack…

Am I alone in thinking that most of the big blockbusters so far this summer have been, well, not very good? We’re halfway through June and the only legitimately great big-budget epic we’ve had to date is Avengers: Endgame; most of the others, from X-Men: Dark Phoenix to Godzilla: King of the Monsters, have ranged from being major disappointments to forgettable duds, and while there is hope for next week’s Toy Story 4 and then Spider-Man: Far From Home in a few weeks, beyond that it doesn’t seem like we’re going to be in for much else in terms of major summer tent-poles that are actually worth a damn.

Unsurprisingly, Men In Black: International is another dud to add to the growing list.

Despite nobody asking for another entry in the ongoing film series, especially one that featured neither one of the original leading duo Tommy Lee Jones and Will Smith, the powers that be at Sony decided to squeeze what little milk was left in their once fluid cash cow, and put into production a completely unnecessary and by-the-numbers spin-off that surprisingly adds very little (if anything at all) to the spirit of the previous three films, even though it has a new cast, new locations, and tons of new aliens for the effects department to show off. It might have new tricks, but this series is still an old dog.

The film focuses on Molly (Tessa Thompson) who, as a child, had an encounter with an alien creature as well as the secret government branch known as the Men In Black that has left her obsessed with finding and working for the agency. When she eventually manages to track them down at their New York headquarters, she is recruited as an agent, albeit on a probationary period, and assigned to MIB’s London branch where she meets top-level agent High T (Liam Neeson) and the brash Agent H (Chris Hemsworth), the latter of whom she teams up for a globe-trotting mission that sees them encountering all sorts of alien creatures, including a deadly species called the Hive, and also the likely prospect that there is a mole within MIB which could threaten the safety of the entire world.

Although F. Gary Gray is credited as the director of this movie – replacing Barry Sonnenfeld, who had directed all three of the previous films in the series – the real entity calling the shots on this one is Sony; this is a blatant studio product through and through, one that feels like it was only made so they can keep the rights to this property and not have their financial lifeline slip into the fingers of another competitor. They’ve done what they can in trying to attract an audience for this one, including hiring leads Chris Hemsworth and Tessa Thompson who are both in their prime and have already proven to have solid on-screen chemistry in Thor: Ragnarok, but despite their best efforts to crank up the charm they’re left stranded by a script that feels like it was bombarded by studio notes left and right, rendering it a manufactured and soulless mess that lacks a true heart. Said script is filled with bland one-liners, uninteresting characters, and a plot that’s very easy to predict (the supposed MIB mole in this movie is exactly who you think it is; don’t be fooled by the blatant red herring they try throwing your way) which makes it a very dull movie to try and get through, because you’re not entertained by any of the characters or the comic relief – especially a little alien sidekick voiced by Kumail Nanjiani who ends up being largely pointless in the grander scheme of the plot – and the plot’s not engaging enough to pique your interest. While it’s not the biggest offender of this summer’s underwhelming blockbusters thus far, it’s still missing all the key ingredients to make itself seem worthwhile or even that necessary to watch.

However, I’ll be honest in saying that, while it’s not a very good movie that has no real reason to exist outside of the studio wanting to cling onto the rights to this property, I’m not even sure this is the worst of the Men In Black series. In terms of corporate cynicism, it’s probably the biggest offender, but I remember being far let down by Men In Black 2 which had the difficult task of following a very entertaining first film that it squandered by very annoying characters, an awful villain, and a noticeable lack of charm from even Will Smith who felt like he didn’t want to be there half the time. At least with Men In Black: International I didn’t necessarily go in with high expectations; it ended up pretty much being exactly what I thought it was going to be, for better or for worse, whereas Men In Black 2 – or MIIB as it was stylised back then – had a lot to live up to in my 9-year-old mind and it just didn’t deliver even back in 2002. That being said, I would put Men In Black 3 above even this movie, because while that was also a franchise entry that nobody really asked for, it actually managed to surprise in some areas by actually being quite poignant and surprising in some scenes, which was far more than it ever had any right to be.

So yeah, overall Men In Black: International ranks as the second-worst of this series for me, but although it just misses being among the lowest of lows it doesn’t excuse the film from being a mostly soulless, studio-controlled mandate that lacks real entertainment factor and any real reason for existing outside of property rights. It’s a movie you’ll be wishing will be wiped clean from your memory.

Men In Black: International is a largely soulless studio mandate of a movie that feels like it was made so that Sony could cling on the property rights, despite the charming efforts of new leads Chris Hemsworth and Tessa Thompson as well as the fact that, for me anyway, it’s not the lowest point of this particular franchise.

Check out Men In Black: International showtimes in London
on Walloh.