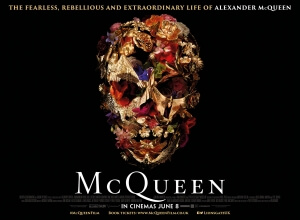 BASICALLY…: Through archive footage and interviews with family and friends, we get to truly know the celebrated but tragic fashion designer Alexander McQueen…

Fashion is clearly not my area of expertise, but that doesn’t mean I don’t appreciate the sheer amount of artistry and passion that can go into the most eccentric of clothing on the catwalk. The work of one Lee Alexander McQueen is something that anyone, whether or not they know all the ins and outs of the industry, can admire for its complete uniqueness and provocative nature, and is rightfully being celebrated long after McQueen’s very tragic suicide in 2010.

His life is now the subject of the insightful and fascinating documentary McQueen, which features several interviews with his closest friends and family members, as well as archival footage of the fashion designer in action, that all come together to paint a very troubled portrait of someone who clearly had some disturbing personal issues, and who very sadly let them cloud his better judgement in the end.

Told in a similar vein as Asif Kapadia’s Amy from a few years ago, albeit in a significantly different manner that separates it greatly from that Oscar-winning masterpiece, the film explores McQueen’s life as he rose to prominence in the world of fashion before he even turned 30, including his appointment as a chief designer at Givenchy and his several noteworthy catwalk shows, which earned incredible attention as well as the occasional controversy (his 1995 show explicably titled “Highland Rape” is shown to earn him an enfant terrible reputation in the press, who called his work misogynist). As several family members and lifelong acquaintances explain, McQueen led a very secretive life with a devil-may-care attitude when it came to his often shocking design choices, but underneath everything was a damaged psyche brought on by a childhood that saw him be sexually abused by his sister’s then-husband, and a lifetime of personality issues that could be chalked down to a grown child just vying for attention and appreciation.

The film, directed by Ian Bonhôte & Peter Ettedgui, is fascinating in how it tells this very private and heartbreaking story about this man’s life; separated into five different “tapes” named after some of McQueen’s fashion shows, it carefully builds a narrative of how this young man from the London borough of Lewisham slowly but surely made a name for himself, from wowing his tutors at Central Saint Martins, to establishing professional and personal friendships with several people including model and mentor Isabella Blow among others. Bonhôte and Ettedgui let the story unfold through a combination of several people’s recollections and dazzling abstract visuals which feature the Alexander McQueen skull in numerous getups inspired by the designer’s shows as depicted in the film. Through this, they are able to grasp onto the audience’s interest by remaining conceptually fascinating as well as visually intriguing, a concept that cleverly mirrors the work of McQueen itself,  and also ensures that there is some level of investment as you watch the trials and tribulations that he’s going through be played out on the screen.

It especially picks up steam, in both its depiction of McQueen’s ultimately tragic story and its strong and effective emotional core, as it describes how unhappy he was when he did find fame. Though he had riches to spare and an unparalleled appreciation within the industry, many interviewees remark on how it didn’t do him much good mentally, with the archive footage showing physical signs of weakness including a dramatic weight loss and an escalating cocaine addiction. Thoughts of ending his own life, several people remark, crept up on him very early on, and only expanded as he loses several people along the way, culminating in the death of his mother which would then lead directly into his own suicide mere days later. One person even recalls McQueen sharing an idea about appearing at the end of one of his shows, and then shooting himself in front of his audience. If you’ve ever known someone to be depressive to the point of contemplating suicide, or if you are going through the same symptoms yourself, this is a very hard-hitting and effective film that takes a closer look at how a damaged psyche such as his can lead to great unhappiness within one’s self, no matter how successful or revered they may be. It handles the topic gracefully and carefully, and even manages to make you feel great sorrow for a man whose natural talents and earned wealth would have otherwise made it impossible for most people to sympathise with.

Regardless of how big or small your knowledge is about the work and life of Lee Alexander McQueen, this is a very poignant, hard-hitting and well-made movie that crafts a much more detailed picture of this man than anything that has come before it. It makes even the least-interested fashionista feel drawn towards his pure eccentric energy and absolute passion for making clothes that would wow and inspire the fashion industry as a whole, which several people recall with as much fascinating detail as they possibly can, but it is also a highly moving and, especially for anyone even affiliated with depression and suicidal thoughts, an extremely vital watch due to its sensitive and honest depiction of someone failing to cope with its overwhelming tendencies. Like McQueen’s most eye-catching creations, this one’s a stunner.

McQueen is a hard-hitting documentary about the tragic life of Alexander McQueen, which tells his story interestingly and compassionately, whilst not glossing over some of the more upsetting aspects of his life, including his severe personality issues and his eventual suicide following a period of depression and self-destruction.