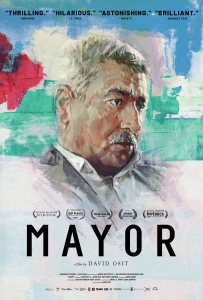 BASICALLY…: Musa Hadid, the Christian mayor of Ramallah, Palestine, attempts to revitalise his city during his second term in office…

2021 has only just begun, and we’re already discussing heavy political topics like the Israeli-Palestinian conflict. However, while the ongoing clash between both states is a complex and sensitive affair, David Osit’s new documentary Mayor opts not for a heavy dissection of the two Middle Eastern countries’ decades-old rivalry, but a small-scale and sympathetic account of a municipal leader trying to do the best he can under the circumstances.

The subject of Osit’s film is Musa Hadid, the mayor of the Palestinian city of Ramallah in the central West Bank, a few miles away from Jerusalem. Hadid is generally well-liked amongst the predominantly Christian community, and throughout a good chunk of the movie we see him doing his job competently, whether it’s organising the Christmas tree lighting ceremony or hosting meetings with foreign diplomats. However, we also see that Hadid’s job becomes a lot harder upon Donald Trump’s acknowledgement of Jerusalem as the capital of Israel, as well as his plans to move the US embassy there; as a result, the neighbouring Israeli army becomes more emboldened as it frequently marches into the city to reenforce their occupation of the territory, seizing surveillance cameras under the pretence of identifying terrorists. Yet, despite the constant setbacks, Hadid’s dedication to the city remains absolute, and he manages to persevere even in the face of some ugly realities.

More of a fly-on-the-wall type of documentary than a talking-heads recap, Mayor sees Osit and his camera crew follow Hadid around throughout the entire movie, almost never being acknowledged and simply letting the scenarios play out in front of us. As we observe, Hadid – during his second term in office when we first meet him – appears to have a good nature and a balanced temperament when it comes to dealing with the city’s appeal to outside travellers; Ramallah itself is a very Westernised city, complete with its own Pizza Hut and KFC restaurants, and even a giant city sign that tourists can take pictures in front of, but Hadid also clearly has high ambitions to show the world how well it can stand on its own two feet. We see him travelling across the world from Washington D.C. to Oxford as part of an awareness campaign for Ramallah’s positioning in the ongoing Israeli-Palestinian conflict, and meeting with VIP constituents like Prince William and Palestinian Prime Minister Mohammad Shtayyeh, all with a singular goal that’s greater than even him; to get someone, anyone, to recognise the difficult situation that he and his city find themselves in. Osit shows good compassion for Hadid’s constant struggles to keep everything together, and his filmmaking allows you to see the frustration buried underneath his brave face, showing how despite his noble intentions he is still a human being who’s unfortunately caught up in an almost impossible scenario.

Hadid is an easy person to like, as he is shown to constantly be putting the needs and desires of the city he clearly holds close to his heart before his own political interests. However, he is no mere pushover, and will let anyone he wants know that neither he nor his city will be intimidated by external forces wanting to reassert their dominance; a meeting between a group of German diplomats briefly takes a bitter turn when they reason for a compromise with Israel, and Hadid defiantly stands his ground on a matter of both principle and dignity. He comes across as a decent, hard-working guy who has passion and a half for making his city stand out, shown also in brief displays of joy when he operates the Vegas-style water fountain outside of the city hall. In a time where faith and trust in politicians seems to be at an all-time low, people like Musa Hadid can be a soothing reminder that, despite their profession, there are still some people in power who do genuinely have the wellbeing of their constituents firmly in their minds.

The film itself is a nice, smooth journey throughout this brief political period, although Osit sometimes leans a little too heavily on the slow structure he’s adopted. It often has a lethargic pace where not many things seem to be happening, which seems like the point seeing how, as the leader of a municipal government, he’s mostly seen carrying out some miniscule and mundane tasks, but it doesn’t often make for exciting or even invigorating cinema, which might cause some viewers with a less stable attention span to get a little distracted. There are also moments where it will suddenly make giant leaps in time – one moment it’s Christmas, and then suddenly we’ve jumped ahead to Easter – and it can be so jarring because there’s not a lot in the editing to indicate the passage of time, which doesn’t make it look as polished as it could have been.

While it’s a decent enough movie about a decent enough political figure, Mayor ultimately doesn’t stretch itself beyond just being – you guessed it – decent enough. Of course, it wasn’t Osit’s intention to dive deep into the Israeli-Palestinian conflict with this film, but rather introduce a small but significant perspective of it, though it perhaps might have benefited from a bit more information than what we get. It doesn’t ultimately ruin the film, but at the same time it doesn’t make it something entirely worth seeking out for more than just the initial viewing.

Mayor is a good-natured, if slow and somewhat light, documentary about Palestinian mayor Musa Hadid’s noble efforts to expand his city’s image across the world amidst the ongoing Israeli-Palestinian conflict, though it never feels cinematic enough to warrant more than one initial viewing.

Mayor is out now on digital and in cinemas (where available).