Max Winslow and the House of Secrets (Review)

Max Winslow and the House of Secrets (Review) 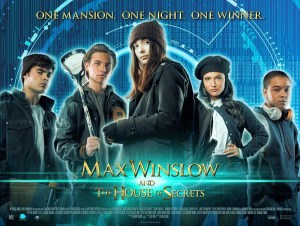 Perhaps the most surprising thing about Max Winslow and the House of Secrets, which is otherwise barren of any real surprises, is that it WASN’T adapted from a YA novel. Despite having a considerable amount of trademarks one would normally associate with narratives designed specifically for adolescent audiences – a leading cast of attractive teens, a high concept with sci-fi edges, Chad Michael Murray etc – it appears to the best of my knowledge that this was an entirely original creation of director Sean Olson and writer Jeff Wild, who must have obviously seen enough YA movies like The Hunger Games and Divergent, and decided to capitalise on that trend whilst also working with a noticeably smaller budget.

For its (lack of) money, though, Max Winslow and the House of Secrets isn’t completely unambitious; it’s definitely derivative of a lot of other things, and you’ll forget that it even exists not long afterwards, but there are some ideas stored within its matrix that are admirable and well-intentioned, despite exploring them about as deeply as a typical after-school special.

The film is set in a quiet Arkansas town, which also happens to be the home of reclusive tech billionaire Atticus Virtue (Murray). One day, he announces that five lucky students of the local high school will be chosen to spend the night at his mansion, where they will compete in a series of games that will reward the winner with the key to the entire place. Among the five teens selected is Max Winslow (Sydne Mikelle), a computer genius in her own right who lacks a number of social skills; she is paired against jock-ish lacrosse player Connor (Tanner Buchanan), self-obsessed Instagram star Sophia (Jade Chynoweth), gaming addict Benny (Jason Genao) and obnoxious bully Aiden (Emery Kelly). Upon arrival at the mansion, they are greeted by an artificial intelligence called Haven (voiced by Star Trek alumni Marina Sirtis), who runs the games in Virtue’s (supposed) absence, but soon turns out to have slightly more sinister intentions with the teens.

I say “slightly”, because as it turns out this movie has stakes which are so low that not even the world’s greatest limbo dancer could slide underneath them. There’s little that is truly at risk here, with no character ever being under any serious threat of harm or worse, and not even a hint that there will be dire consequences which will truly impact on their life in major ways. Imagine, if you will, that this is a version of Willy Wonka and the Chocolate Factory where none of the other kids had seriously traumatising stuff happen to them during the course of their visit, and instead they were just given a stern talking to by a haywire rip-off of HAL 9000 from 2001: A Space Odyssey, which simply tells them to stop being naughty; that’s exactly what this movie is, and if that sounds utterly lame to you, then chances are you won’t find this movie very entertaining because that’s all you’ll be thinking about.

It certainly won’t be for much else here; the limited budget does show in a number of scenes, from cheap CGI to repeated uses of certain locations inside this mansion, the story is constantly reminding you of much better movies you should be watching instead, and not even the acting is interesting enough to hold it all together, with most of the performances being largely mediocre alongside plenty of non-emotional reactions to reveals that would send anyone else into at least a state of shock. The characters, too, aren’t particularly engaging; many of them are simply types – there’s the bully, the gamer, the social media personality, the loner etc – so much so that you can literally pinpoint which child from Willy Wonka and the Chocolate Factory that they’re most like; it’s easy to spot who the Charlie Bucket of this group is, or the Veruca Salt, or the Mike Teavee, and so on until, again, that’s what you’ll be thinking about more than the actual film and its bland characters themselves.

All of that being said, while the film isn’t going to be one that’ll be fondly remembered by its target teen audience any time soon, credit is due on part of the filmmakers who manage to mine some interesting creative ideas out of what little they’d been given to work with. There are sequences which show that they at least had some idea of a visual style; one of the contestants is forced to participate in an uncomfortable black-and-white TV game show, and the use of certain camera angles and lighting almost give off a Terry Gilliam vibe which certainly sets itself apart from the much more static camera work elsewhere in the film. Its ideas and themes, when you break them down, aren’t all bad either, but the execution of them is questionable, and leaves you wondering what some parts of the overall plan had to do with certain other parts, which don’t always add up by the end. They are also explored in ways that seem rather shallow, as if to say a simple discussion can fix so many fundamental personality flaws in one fell swoop; the film actually does address this nearer the end, but it’s not enough to stop it from feeling about as deep as a government-backed PSA on bullying and other topics.

It’s definitely not among the worst examples of the YA genre, but it’s also nowhere near the best examples either; you can count on Max Winslow and the House of Secrets eventually succumbing to obscurity along with all the other middle-to-low tier entries in this plethora of adolescent-targeted flicks.

Max Winslow and the House of Secrets is a mostly mediocre attempt to branch out of the YA genre, with little success due to its derivative plot and uninteresting characters, and only an occasional glimmer of stylistic and creative ambition.

Max Winslow and the House of Secrets is out now in cinemas across the UK.