Mass (Review) – An Emotional Drama Deserving Of Your Prayers 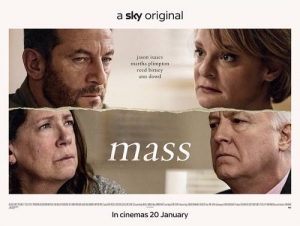 BASICALLY…: Two bereaved parents (Isaacs and Plimpton) meet with the parents of their child’s killer (Birney and Dowd)…

While not based on a previously-existing play, theatricality is very much at the heart and centre of writer-director Fran Kranz’s Mass. Its singular location, limited cast members, and a heavy reliance on descriptive dialogue over layered visuals all carry that familiar theatrical weight, which under normal circumstances wouldn’t exactly translate that well into filmic language, but amazingly Kranz’s intimate and powerfully contained drama is one that still manages to feel exciting and absorbing for the viewer, even with many of the traditional conventions surrounding the visual medium removed.

Mass is set in real-time at a small church, where bereaved couple Jay (Jason Isaacs) and Gail (Martha Plimpton) have agreed to meet face-to-face with Richard (Reed Birney) and Linda (Ann Dowd). The reason for their uncomfortable meeting is made apparent early on; six years prior, Richard and Linda’s son Hayden shot and killed several fellow school students, including Jay and Gail’s son Evan, before then turning the gun on himself, a tragic event which neither set of parents have been able to fully move on from. Their meeting soon turns into a full-on interrogation as both parents attempt to analyse the circumstances that their children became connected by, with everything from their parenting methods to the ineffective actions of both the police and the school all coming into question as each parent tries to make sense of a senseless tragedy.

Since we are in this room with these four characters for almost the entire movie (save a brief prologue and even briefer epilogue), there is a real intimacy that only few other one-location movies like 12 Angry Men and as recently as The Humans have managed to accomplish in the film format. Mass is a dramatic piece that asks the audience to go on this wild roller-coaster journey of emotions that does not let up until the final few moments, which Kranz finds subtle ways of making worthy of a big-screen experience instead of just being confined to stage-like settings for its entirety. The director plays around with camera angles, switching from static shots to handheld motion, and even switching aspect ratios roughly halfway through to highlight some of the severely dramatic swerves, which add a level of engagement and even excitement to the confined location. The script is also full of meaty dialogue that neatly sets up context and allows for some extremely hard-hitting monologues which in turn let the viewer much more into their fractured emotional space; with each minor revelation, there comes a fierce commitment on Kranz’s part to ensure every one of them lands with the right words, otherwise the whole thing would instantly collapse upon itself.

It’s beneficial that Kranz’s script is as good as it is, because the dialogue is so key to a lot of this drama, but none more so, one would argue, than the four central performances that are effectively carrying the entire thing on their shoulders. Once again, Mass is in safe hands as Jason Isaacs, Martha Plimpton, Reed Birney and Ann Dowd all give fantastic performances that absolutely sell their characters’ remorse, anger, frustration, resentment, guilt, and so much more in such a limited space and amount of time. These performers are the reason why Kranz’s dialogue hits harder than it already does, because you can absolutely feel the passion and the worked-up emotion inside each and every one of them; not one person is labelled as the villain, nor even the hero, for they all have their own set of demons and redemptive features that they all want to get out in the open, often resulting in some tender and brutal confrontations, both verbal and emotional, and each one of them is absolutely perfect at bringing out everything they need to for their respective characters. It’s admittedly difficult to single out a sole player for their incredible work here, but MVP status is shared between both Ann Dowd and Jason Isaacs, the latter delivering one of the strongest performances of his career to date, and the revered character actress bringing heaps of sympathy to someone who severely regrets their negligence which ended up getting people killed.

These excellent performances and an impactful script certainly liven this emotional ride, and for about 95% of Mass it works beyond belief; the lesser 5% is due to a couple of out-of-place scenes involving some of the church’s members who come in with comedic schtick in a narrative that really doesn’t need any, which threaten to ruin the mood and overall tone. Other than that, Mass is a powerful piece of drama that makes the most out of its limited scope and its four excellent lead performers to deliver something which will get people thinking, crying, and maybe even inspired to write all in one fell swoop. It’s a delicate piece of big-screen theatricality.

Mass is a powerful and intimate drama that makes strong use of its limited locations and a fantastic performing quartet, with actors like Ann Dowd and Jason Isaacs delivering some career-best work, under subtle direction and a cracking script by filmmaker Fran Kranz.

Mass is now available to stream on Sky Cinema and NOW TV.