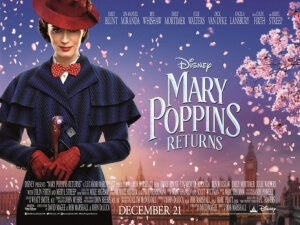 BASICALLY…: Mary Poppins (Blunt) returns to the Banks home where an adult Jane (Mortimer) and Michael (Whishaw) need her help once more…

From the moment that she first flew right to the front door of 17 Cherry Tree Lane in 1964, Mary Poppins has become a beloved family icon with all sorts of magic up her sleeve, and a wondrous collection of melodies that people still sing along to even today. No matter what you may think of her, or the infamously terrible Cockney accent that Dick Van Dyke was doing, there’s something for everyone to enjoy with a bright and cheerful musical that still holds up more than fifty years later.

That’s more than enough time for the world to do without another one of her fantastical adventures, and right on the dot here comes Mary Poppins Returns, a sequel to the beloved classic that proves to be just as delightful and fun as its cherished predecessor. Of course, it’s not without its pitfalls, but none of them are enough to put a damper on what is essentially a wonderful film for children of all ages.

Taking place 25 years after the events of the first film, we are re-introduced to the Banks children, Jane (Emily Mortimer) and Michael (Ben Whishaw), both now adults and, in Michael’s case, parents of their own. Michael in particular is experiencing great difficulty as he is given notice by the bank that they shall reclaim the house if all of his debts are not repaid in full, and all of this while he and his children John (Nathanael Saleh), Annabel (Pixie Davies) and Georgie (Joel Dawson) are still in mourning for Michael’s recently-passed wife. Almost on time, down from the clouds comes Mary Poppins (Emily Blunt), Jane and Michael’s old nanny, to sort things out in the Banks household, which involves taking the children on several magical adventures with lamplighter Jack (Lin-Manuel Miranda) also along for the ride, and helping Jane and Michael find a way to save their home from the possession of snivelling banker William Weatherall Wilkins (Colin Firth) – all while adding a touch of magic, as well as a little bit of singing and dancing, to her style.

When you break the plot down, it is a reformatting of the first film’s structure, which is attracting a bit of a backlash from people who hold the original close to their hearts, and that’s understandable if they feel that way about this movie. At the same time, though, if people like that use it as an excuse to completely miss the joy that this movie brings, then I truly feel sorry for them; sure, it’s the same formula as before, but when it works as well as it does here then none of that really matters, because there’s just enough new things added to make it enjoyable as well as a true sense of passion behind the camera that doesn’t make it feel too cynical. You can tell that director Rob Marshall, writer David Magee and every other person working on this film truly loves the first film to pieces, and have been granted the budget to craft their own love letter to it which pays homage but also brings its own voice into it as well; something familiar, certainly, but something that goes in a slightly new direction that most people can get behind just enough. There are times, though, when the film does tend to feel a little too familiar, but again those moments are few and far in between, and they don’t outright ruin the overall experience you’re bound to have with this film.

Regardless of its connections to the 1964 original, on its own this is an impeccably made movie musical with stunning production values and some lively as well as entertaining performances by the entire cast. Emily Blunt makes for a wondrous replacement for Julie Andrews, making the character entirely her own but never straying too far from how author P.L. Travers originally intended her to be, and although his character is basically Bert in all but name, Lin-Manuel Miranda has one hell of a charming screen presence (and does a fine Cockney accent as well) in a role that puts his charisma and rhyming talents to very good use in some of these musical numbers. Speaking of which, the music in this is tons of fun, especially in how these numbers are choreographed and once again performed (Meryl Streep, who shows up in one scene as an Eastern European cousin of Poppins, appears to be having an utter blast in her small role), even if Marc Shaiman’s lyrics don’t feel as immediately iconic as the ditties by the Sherman Brothers back in the day. The soundtrack is at its best when it ventures into hybrid territory, as the live-action characters take a journey into the bright and colourful world of a porcelain bowl, populated by 2D-animated talking animals that look very much like the style of Disney animation from the 1960s, and where some of the most jovial songs in the entire piece are performed with such dexterity and passion that’s hard to hate. On a personal level, it’s wildly joyous to see Mary Poppins and company interact with old-style cartoons once more, because that was always my favourite part of the original film as a child, and this movie brought that back in a very cleverly done and stylish manner.

Like the first movie, Mary Poppins Returns is a film that only the most cynical of people will outright hate, as well as those who pooh-pooh every time that Disney releases one of their big-budget sequels/remakes of old classics. Once again, I feel nothing but pity for those types of people that can’t let go of their cherished treasures and enjoy something that is as delightful and wildly magical as this one, and I say that as someone who also liked the original and how practically perfect in every way it was; this one’s almost as perfect, in my opinion.

Mary Poppins Returns is a delightful movie musical that takes the familiar formula of the beloved classic and adds some fun new things to it, all while retaining just enough of its magic to carry you through as well as some jovial songs and some passionate performances, particularly by a practically perfect Emily Blunt.