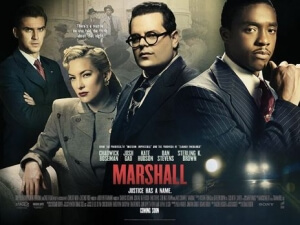 BASICALLY…: African-American lawyer Thurgood Marshall (Boseman)  takes on the case of a black chauffeur (Brown) accused of the rape and attempted murder of his employer (Hudson)…

The life of Thurgood Marshall, the African-American civil rights lawyer who would later become the first black Justice appointee to the US Supreme Court, has yet to be fully explored on the big screen. Sure, there have been interpretations of the man in several TV movies, and he has appeared as a supporting figure in a few other films like The People Vs. Larry Flint, but Reginald Hudlin’s Marshall – with Chadwick Boseman playing the eponymous figure – is the first major big-screen release that focuses on a specific event in his life, and it’s one that he’s not even that well known for.

The film focuses on an early point in Marshall’s career as a lawyer for the National Association for the Advancement of Colored People, specifically in 1940 when he is assigned a case which sees black chauffeur Joseph Spell (Sterling K. Brown) being accused of the rape and attempted murder of his white socialite employer Eleanor Strubing (Kate Hudson). However, segregationist restrictions prevent Marshall from even speaking in the courtroom, so he appoints lowly insurance lawyer Sam Friedman (Josh Gad) to act in his stead, and together they work on a case that seeks to pull apart the accusations and reveal the truth to the jury.

It’s interesting that for the first major big-screen outing for this man and his rather fascinating career, it focuses purely on an early point in his career, one that isn’t even a case many people are aware of. The intent seems to be that Hudlin is providing viewers unfamiliar with Marshall a stepping stone into further research about his life and what he would later go on to achieve, and there’s no denying that the intentions always had its heart in the right place. It comes off, however, as a standard but watchable courtroom drama to those particular people, with hints about Marshall’s strong tendencies but ultimately coming up short on really bringing to life what exactly made him stand out.

Boseman does some really strong work here, as does Gad in a rare dramatic performance (which does kind of feel they got him because Jonah Hill was unavailable), and together they share a good working relationship where both experience prejudices of racism and, in Friedman’s case, anti-Semitism (which mirrors the atrocities in Nazi Germany going on at the same time as this), and use that to further their determination to defend the accused individual. However, the script doesn’t call for much character to be developed for Marshall, who because of the fact he is prohibited from speaking in court must rely on this white man as a mouthpiece for most of the time, and aside from just doing his job as a NAACP lawyer there doesn’t seem to be anything for him to lose personally, a fact that is pointed out at least once in this film. Watching this film, you don’t truly get what makes this man worthy, which is kind of the point seeing as this is all happening before Thurgood Marshall even became a household name, but in this instance he’s just represented as another one of these type of do-good lawyers who wants to deliver justice, and not much else. If this were to be the first in a number of films about Thurgood Marshall and his many accomplishments, then it would be fine; but at the moment, this just appears to be a one-off, and it comes up just short of representing this truly fascinating person and why he’s so awesome.

Though it may not be the big-screen biopic you’ve been waiting for on this man, it still works just fine as a standard courtroom drama. Watching it, you’re interested to find out the real story behind these accusations, and it’s gripping to see these actors – even Josh Gad, who again fits surprisingly well into this story – deliver to the best of their ability their arguments and pushes on witnesses to discover the truth as this case goes on. There are certainly two-dimensional figures clearly designed for the sole purpose of being loathed by the audience, like Dan Stevens’ smarmy and self-satisfied prosecutor as well as the many bigots both Marshall and Friedman encounter, but it’s an interesting case that you’re curious to see the outcome of, and the power shared between both Boseman and Gad on-screen is unmistakable.

Hopefully there will be a more thorough and edgier Thurgood Marshall big-screen biopic in the future, but as a mere stepping stone for viewers towards researching this man’s incredible life, it’s not a bad place to start.

Marshall is a serviceable courtroom drama that dramatizes an interesting real-life case and is bolstered by the watchable duo of Chadwick Boseman and Josh Gad, but it comes up short of truly representing the accomplishments of the real-life Thurgood Marshall on-screen.