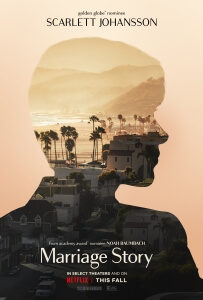 BASICALLY…: A couple (Johansson and Driver) clash during a divorce that pushes them to their personal and creative limits…

This review is of the cut shown at the BFI London Film Festival in October 2019 – it is currently scheduled to debut on Netflix on December 6th 2019.

Though not his first film to tackle the heavy subject of divorce – his Oscar-nominated comedy-drama The Squid and the Whale saw to that – writer-director Noah Baumbach’s newest film Marriage Story still finds new and fresh ways to tell the story of two people drifting apart, in hard-hitting and quietly devastating ways that will ring true for anyone who’s gone through a separation.

Baumbach’s two (ex)lovers are Charlie (Adam Driver) and Nicole (Scarlett Johansson). She is an actress from Los Angeles, he is a director from New York, and together they have been working on his off-Broadway theatre company, while raising their young son Henry (Azhy Robertson). However, when Nicole expresses a desire to move back to California to shoot a television pilot, something that Charlie is not at all keen on doing, divorce proceedings are kickstarted; initially wanting to have the separation be as amicable as possible, they are soon urged to get lawyers – which is when the initially peaceful process starts getting ugly.

There is no doubt that anybody who has gone through a pretty rough and costly divorce will be most affected by this movie – I know more people than I’d care to admit who have separated from their partners, and have heard nothing but gruelling things about the process – but even if you haven’t, there is still plenty of thoughtful and intelligent drama to pick apart here. The movie focuses on a situation where both parties come from different sides of the country, and how that creates numerous legal and custodial complications; Charlie is a confirmed New Yorker, while Nicole has roots in California, and at first Nicole brings young Henry with her to live, with Charlie forced to fly from one coast to the other just to see his son. Because she also files the divorce papers in California, Charlie must also conform with the state law that he may only tackle the case there and not in New York, where he makes no secret is where he’d much rather be. It’s challenging for Charlie – who must also find time to oversee one of his plays transition to Broadway – but it’s also an emotional challenge for Nicole, who confides in her lawyer Nora (Laura Dern) during a tautly-written and beautifully acted monologue all of the things that led to their eventual separation, yet she still appears to have some empathy for him, enough to where she doesn’t want the divorce to end up too badly for him. Baumbach smartly gives us glimpses into both sides of the divorce, showing very different and all too real struggles each one of them has to go through, which makes you feel the heavy emotion on display when things inevitably come to a head because you understand exactly where each of them is coming from.

Johansson and Driver deliver two of the most emotionally driven performances of their respective careers, brilliantly finding ways to show how the divorce is quietly effective both of their characters. Like most Baumbach movies, there is a note of narcissism in these protagonists, which can sometimes make them hard to sympathise with, but the actors really find a way to humanise them without glossing over their major personality flaws. You feel their frustration, you feel their sorrow, and most of all you feel their bubbling resentment of each other as the legal side of the divorce starts to affect their personal relationship, because these actors are working with material that really brings out the best of them, sometimes in ways that the audience has rarely ever seen from them up until now. Their performances are so good here that at one point you forget that you’re watching highly-acclaimed actors trading dialogue with one another, and it truly feels like you’re instead watching two people that used to love each other trying to now deal with life without them. It’s devastating stuff from both actors, and it would be wrong if at least one of them wasn’t in the conversation for the upcoming awards season.

In fact, Baumbach deserves to be just as much part of that conversation. Even if you’re not the biggest fan of his often dry and overly quirky style – I’ll be upfront in saying I didn’t particularly care much for Frances Ha, one of his more acclaimed movies in recent years – you’ll be won over by his taut writing and direction here. This feels like him at his most mature and composed, with the writing especially feeling like it comes from close personal experience, and every scene paced just about right so that it never outstays its welcome. He brings a new emotional side to his work that feels fresh and almost like a career invention, retaining elements of his original style but branching out into deeper themes with a refined sense of purpose. It’s easily one of his best films thus far, as it hits some truly tender spots that rub you the wrong way but also suck you in to the very real drama surrounding everything.

It’s probably best avoided, though, if you yourself have indeed gone through a bitter break-up; as good as Marriage Story is, it’s guaranteed to stir up some painful memories for you.

Marriage Story is a mature and composed look at a growingly acrimonious divorce, delivered by some of the strongest work that writer-director Noah Baumbach and stars Adam Driver and Scarlett Johansson have yet done, and really takes you through the emotional highs and lows of a broken marriage.

Want to decide what the movie’s like for yourself?
Check out Marriage Story showtimes in London
via