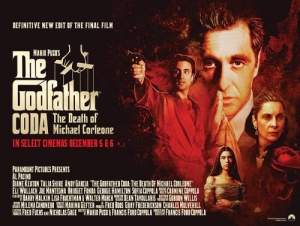 BASICALLY…: Aging mob boss Michael Corleone (Pacino) seeks to sever ties with his criminal empire, but finds that he can’t fully escape from his past…

In 1972, Francis Ford Coppola’s adaptation of Mario Puzo’s novel The Godfather became an instant classic, setting the standard for most gangster movies from there on as well as most movies in general with its epic storytelling, beautiful cinematography, and a slew of oft-parodied moments from the horse’s head to Marlon Brando’s iconic (if, let’s be honest, a little silly given his high-pitched voice) performance.

Two years later, Coppola followed it up with The Godfather Part II, which is often considered one of the greatest sequels ever made for its expansive range of character and story (set across two timelines, one in the past and its present), some legendary performances from the likes of Al Pacino and an Oscar-winning Robert De Niro, and an even greater dive into its dark themes about family and retribution.

And then, there’s the third one. You probably already know about the disappointment many felt upon seeing The Godfather Part III for the first time, with pretty much everyone comparing it harshly to its two predecessors, saying that numerous things from its plot to the violence to the acting couldn’t hold a match to what came before. What you might not know, however, is that Coppola himself shares some of those sentiments; both the director and co-writer Puzo originally envisioned the film as more of an epilogue than a full-on third part of the trilogy, even preferring the title The Death of Michael Corleone over The Godfather Part III, but the executives at Paramount nixed the idea and instead just wanted Coppola to make a straightforward Godfather movie (the only reason Coppola finally agreed to make the film was because he was facing financial difficulties after the commercial failure of his 1982 movie One from the Heart).

Thirty years after the theatrical cut of The Godfather Part III debuted to mixed (at best) reviews, Coppola has returned to the editing room for a more definitive cut that’s much closer to his and Puzo’s original vision. The new edit, known fully as Mario Puzo’s The Godfather, Coda: The Death of Michael Corleone, makes a few notable changes such as a different beginning and ending, and certain scenes have been trimmed down to give it more of a fluid pace. Other than that, it’s more or less the same movie as The Godfather Part III, so your opinion of it is unlikely to change with this version, but it is a slightly tighter film which might make it a little more digestible.

Because I’m generous, here’s a basic recap of events leading up to this point (WARNING: SPOILERS FOR DECADES-OLD MOVIES FOR THE REST OF THIS REVIEW): Michael Corleone (Al Pacino), the son of respected mob boss Vito Corleone (Marlon Brando in the first film, and Robert De Niro in the second), is forced to spearhead his family’s criminal enterprise after his father is shot, and his eldest brother Sonny (James Caan) is killed, despite Michael’s reluctance to have any part of the family business. Soon, though, he adjusts all too comfortably to his new role as the don, raking in fortunes from casinos and other business ventures, but his life also comes with assassination attempts, fallouts with other dons and crime families, the disintegration of his marriage to a nice woman named Kay (Diane Keaton), and to top it all off he has his own brother Fredo (John Cazale) whacked for a petty betrayal.

The third film (both versions of it) finds us in the late 1970s, where Michael Corleone (once again played by Pacino) is now in his sixties and attempting to redeem himself after a lifetime of murder has left him riddled with guilt. He is engaging in generous philanthropy, donating millions to good causes, and is currently seeking to obtain control of international real estate company Immobiliare, which the Vatican currently holds the majority of shares in. Michael also brings on board his nephew Vincent Mancini (Andy García), the illegitimate son of his late brother Sonny who shares his father’s short temper, to handle certain parts of the family business, which here is threatened by everything from double-crossing fellow dons to slimy accountants to assassins to, most punishingly of all, Sofia Coppola’s infamously wooden turn as Mary, Michael’s daughter who also shares a questionable infatuation for her cousin Vincent.

The casting of then-19-year-old Sofia Coppola – who would of course go on to find great success as a filmmaker in her own right – was the biggest target of criticism of the original theatrical cut, with her father accused of nepotism for his decision to put the dramatically inexperienced Sofia in a major role, and while it’s unfair to place the majority of the blame on Coppola’s performance, it is sadly a very flat turn that instinctively reminds one of the equally wooden acting in the Star Wars prequels (which, ironically, Sofia Coppola would have a minor part in as one of Queen Amidala’s handmaidens in The Phantom Menace). In the Coda cut, a lot of her role is noticeably removed in certain scenes, perhaps to soften the blow somewhat, but some of the edits made around it are a little jarring; a scene between her and Pacino will suddenly be cut short mid-conversation, while there is the addition of ADR lines on the soundtrack to try and explain why she might seem monotone whilst giving a speech. This new version unfortunately doesn’t fix the overall performance, but it does at least reduce her screen time slightly to make her less of an intrusive presence.

Other notable changes include the removal of the anti-climactic final couple of minutes from the theatrical cut, a flash-forward where an elderly Michael Corleone simply slumps in his chair and dies unceremoniously. This version replaces that with the same scene, except Michael doesn’t die and instead sits silently all alone; the new ending hits a little closer to what Coppola was aiming for with a decades-long depiction of a man’s fall from morality that ends with nobody left by his side, even though it robs the film of the death of Michael Corleone in a cut that specifically has the title The Death of Michael Corleone. Pivotal scenes have also been removed, such as Vincent receiving the order to kill Joe Mantegna’s obnoxious enforcer Joey Zasa from Michael’s sister Connie (Talia Shire) while Michael recovers from a stroke in hospital; I’m not entirely sure why this scene was cut, because it does set up the following assassination scene and the later scolding on Connie’s part in the authorisation.

Beyond that, it’s not much different to the original The Godfather Part III cut, and thus you’re bound to have the same praises and criticisms as you did that version. The filmmaking is still competent, Pacino’s performance (while over-the-top in parts) is still strong, and there are still some stand-out moments such as the climactic opera sequence and Andy García’s charismatic turn, which netted him an Oscar nomination; but everything else, from the convoluted plot to some of the lesser acting, is also still intact. By all means check this version out if you’re curious to see how it compares to the original cut, but don’t expect it to completely change your opinion on what is by all accounts a disappointing resolution to an otherwise grand film series.

Mario Puzo’s The Godfather, Coda: The Death of Michael Corleone is a new cut of the divisive final entry in Francis Ford Coppola’s acclaimed trilogy which makes a few necessary adjustments, from a slightly different but more appropriate ending to the lessened role of Sofia Coppola’s infamously wooden performance, but not enough to completely change your mind about the overall movie.

Mario Puzo’s The Godfather, Coda: The Death of Michael Corleone is out now in select cinemas across the UK, and is available on both digital and Blu-Ray on Tuesday 8th December 2020.