Maps To The Stars (Review)

Maps To The Stars (Review) 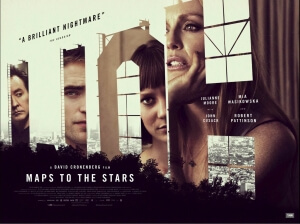 Commendably, Maps To The Stars marks the very first time that Canadian filmmaker David Cronenberg has not only filmed a project in Los Angeles, but also within the United States as a whole. The director, used to shooting in his home city of Toronto (which was also used for filming interior scenes in this movie), has held back on his usual resistance to filming on American soil in order to tell this tale of debauchery, vanity and downright disturbing behaviour in modern-day Hollywood. For any aficionados of the film industry or even anyone who happens to operate within it, it’s a nightmarish unravelling; and for everyone else, it’s a very batty affair indeed.

Cronenberg, once more working with regular cinematographer Peter Suschitzky, has crafted an environment that both looks and feels vapid as well as lifeless. Everything from the oversized mini-mansions to the colourful indoor cafes is made to feel plastic and phony, an extreme example of conveying the materialistic lifestyles these characters live. It is an overwhelming and uncomfortable climate to be drawn into, and Suschitzky’s gripping visual work here allows us to feel the disturbed nature right up front. Leaving another impression is the sound editing, which also works wonders in channelling the psychotic episodes certain characters experience – for example, the first time we see the ghostly vision of Sarah Gadon’s deceased movie star (and the abusive mother of Julianne Moore’s unhinged character), she taunts and frightens her grown daughter while in the bath… but if one listens closely, the sound of splashing water or anything else is entirely absent. It not only adds to her paranormal presence but also to the possibility that Moore’s psychological imagination is overshadowing her real ambitions. It’s an ingenious move on Cronenberg’s part as well as the sound design team, and one that always pays off whenever that particular trick comes back into play.

The style, tone and consistency are still in keeping with Cronenberg’s trademark vision, including warped imagery and a heavy lean towards dark comedy. They tie in to something that David Lynch would have made just a few years ago (although considering the LA-set Mulholland Drive and Inland Empire are among that director’s filmography, he may have done so already), or at the very least a more conventional director with a strong Lynchian influence. The twisted visions that characters have of certain figures make for deliberately uncomfortable viewing and the humour, though morally reprehensible, is so pitch black and at times shocking you can’t help but find it all a bit sadistically entertaining.

The film’s execution of its takedown of the Hollywood lifestyle is well-handled in a way that doesn’t go too over-the-top, and calls out other projects that do the whole on-the-nose satire the wrong way. At 2013’s Sundance Film Festival, much attention was drawn to independent film Escape From Tomorrow due to its strong opposition toward Disneyland and the Disney corporation as a whole. That film, however, turned out to be nothing more than the cinematic equivalent of a mean-spirited schoolyard taunt directed at an individual who they just happened not to like yet wanted to share their biased opinion with the world anyway. Where Maps To The Stars works where Escape From Tomorrow certainly doesn’t is that it is not just pointing and laughing at the vacuous nature of Beverly Hills inhabitants; there is a logical reasoning behind it all, an intelligence in Bruce Wagner’s screenplay that gives everything a complex understanding of how they function. If anything, it’s a cautionary tale about the combination of self-absorption and fame, and how it can never lead to good consequences. Escape From Tomorrow, on the other hand, never tries to be anything other than a one-sided accusation of the Disney integration into modern society, offering no strong points to back its own theory up. Put simply, Maps To The Stars is unpleasantness done fairly whereas Escape From Tomorrow is unpleasant for the sake of being it.

Cronenberg, as always, has rounded up a talented ensemble cast to fill these roles, including John Cusack and Olivia Williams who do well as an egoistic therapist and controlling stage mother respectively, Mia Wasikowska whose blankness is put to good use as an unhinged and scarred outsider who lands a job as Moore’s personal assistant, Robert Pattinson who underplays his somewhat underdeveloped character of a writer/actor-cum-limousine driver (so underdeveloped that he simply disappears from the film altogether after a key scene late in the movie), and Evan Bird who leaves a mark as the unholy mix of Justin Bieber and Shia LaBeouf that is obnoxious child star Benji Weiss. However, it is Julianne Moore who walks away with the entire film in a wholly committed and fearless portrayal of an aging actress desperate to hold on to her legacy. Hers is a performance we’ve never really seen her do since Boogie Nights, mixing raw human emotion and pathos with a deeply satirical bite at the same time (her upbeat reaction to a tragic incident involving a rival actress is hauntingly cruel). We would say that Moore is going to at least be Oscar-nominated for this role but sadly, in a move that reflects the nature of the very industry the film is satirising, Maps To The Stars is not scheduled to play in US cinemas for an awards-qualifying run this year.

But then again, when you see how much it takes a pot-shot at Hollywood lifestyles, can you really blame them?

Maps To The Stars is blindingly-affective satire, with David Cronenberg doing surreal wonders with Bruce Wagner’s clever script and mining a career-best performance from Julianne Moore out of a talented ensemble cast. Put this film on your own map as soon as you can.