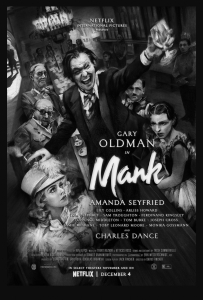 “It’s Terrific!” So boasted the infamous tagline for Orson Welles’ Citizen Kane, and while you may think it’s a very self-aggrandising thing to put on a poster, it’s not an inaccurate claim. Though initial reception was mixed, and out of the nine Academy Awards it was nominated for it only won for its screenplay, Welles’ film has earned a reputation as one of the greatest, if not the greatest, movies ever made, and it’s easy to see why with its compelling story, deeply complex characters, stunning black-and-white cinematography, and performances from a then-unknown cast (including Welles himself as the titular media mogul) that have become legendary in their own right.

It’s a film that has inspired and motivated countless other filmmakers over the years, but David Fincher – with his first film since 2014’s Gone Girl – has taken an extra step among others to truly align his film with the style and complexity that Welles managed to bring nearly eighty years ago. Fincher’s Mank is also a rather personal outing for the director, with the script being written by his father Jack Fincher, who passed away in 2003 with only his screenplay to his name after a lifelong fascination with Citizen Kane and, in particular, its co-writer Herman J. Mankiewicz. It is he that Fincher Sr.’s script follows during the lead-up to his finishing of the initial draft of Citizen Kane – then named American – and who Fincher the director uses as an unreliable avatar into the world of 1930s Hollywoodland (as it was known back then) that was rife with political and economic complications, and full of personalities with wavering power and hovering egos to match that of Charles Foster Kane himself.

It is also, in case it wasn’t immediately apparent, an absolute masterpiece in and of itself, not only Fincher’s best movie since The Social Network (and indeed may even be superior), but might well be a new classic of the modern era, with filmmaking qualities and extremely intricate writing that Welles and indeed even the real Mankiewicz would have looked fondly upon.

Our initial introduction to Herman J. Mankiewicz (Gary Oldman) is when he is transported to the remote North Verde Ranch in the Mojave Desert, sometime in the late 30s. A drunk who’s effectively bed-ridden following a car accident, and with only a German housekeeper (Monika Grossman) and English secretary Rita Alexander (Lily Collins) at his immediate side, Mank – as he is known to all – has been tasked by young up-and-comer Orson Welles (Tom Burke) to complete a draft of the script that would of course become Citizen Kane, with only less than 12 weeks to get it done. While Mank dictates the script to Alexander, we frequently cut back to Mank’s time as a studio writer under the watch of industry giants like Louis B. Mayer (Arliss Howard), Irving Thalberg (Ferdinand Kingsley) and David O. Selznick (Toby Leonard Moore), which was constantly fuelled by Mank’s excessive drinking, over-eager gambling, and political views which did not match those of the higher-up figures, much to the frustration of his long-suffering wife Sara (Tuppence Middleton). During this time, he also develops a platonic friendship with actress and socialite Marion Davies (Amanda Seyfried), the mistress of wealthy media tycoon William Randolph Hearst (Charles Dance), both of whom would serve as unofficial inspiration for primary characters in Mank’s script.

Much more of an intricate study of 1930s Hollywood than a full-on dramatization of Citizen Kane’s development (which only makes up a small portion of the movie, as does the oft-debated theory about who deserves the most credit for the film’s screenplay between Welles and Mankiewicz), Fincher’s film is remarkable in its restraint from slipping all too easily into sentiment. This is both a love letter and a scathing critique of how things were run back then, from the constant wandering from set to set on studio backdrops, to the eerily timely use of media manipulation to sway public political views, all of which both David and Jack Fincher in their direction and writing respectively approach with caution, insight and a healthy dose of wit. David Fincher opts for not just black-and-white cinematography – captured exquisitely by Erik Messerschmidt – complete with an overlay of 35mm film grain and cue marks, but retro mono sound as well to fully replicate a film that would have been made around this time period, in an immersive and fittingly cinematic style that the director cunningly uses to give the audience a snapshot of this time in history through the means that most filmmakers back then were expected to use. Likewise, Jack Fincher’s script is full of energy and sophistication, with dialogue that captures the wily essence of Mankiewicz himself while also telling an intricate story of the business he was a mere pawn in, one that’s full of half-hearted promises and neglect for the very people they’re making movies for.

In a stunning performance that is equally hard to take your eyes off of, Gary Oldman inhabits the self-destructive vices of Mankiewicz from his constant drunkenness to a sense of cynicism that has gotten him far in the industry, relayed through his quick wit and easy charm that the actor brilliantly brings to life. Matching him in greatness, albeit on a more unexpected level, is a perfectly cast Amanda Seyfried as Marion Davies, who oozes charisma and grace in every single scene she appears, and like Oldman is impossible to dislike. There is not a single performance in this movie which feels out of place, from supporting players like a stand-out Arliss Howard as a ruthless Louis B. Mayer, to minor appearances from famous figures like Shirley Temple and Charlie Chaplin; each and every actor, all under Fincher’s direction, nails exactly the kind of tone and atmosphere that both the filmmaker and his screenwriter father are aiming for, and it’s a gorgeous sight to see.

Here is a movie about the ins and outs of Hollywood that doesn’t overly romanticise certain practises, nor does it entirely dismiss them either; it is an evenly-balanced, intelligent and beautifully made account of creative ownership, integrity and morality set amidst the black-and-white backdrop of 1930s Hollywood, a time and place where none of those things were easy to come by. As Citizen Kane was Orson Welles’ masterpiece, Mank is undoubtedly Fincher’s, transporting the filmmaker once known for films like Se7en, Fight Club, Zodiac and The Social Network (among many others, of course) into a higher realm of sophistication and respect that Welles himself was once fortunate enough to receive, with a film that captures the period and its many complex characters effortlessly.

In other words: It’s Terrific!

Mank is a masterful account of writer Herman J. Mankiewicz’s time in Hollywood, leading up to his definitive script for what would become Citizen Kane, in a movie that views 1930s Hollywood as a fascinating but flawed industry with plenty of personality that director David Fincher accentuates with stylish and retro filmmaking, writer Jack Fincher energises with a witty and intelligent script, and perfect performances across the board from Gary Oldman to Amanda Seyfried. It is easily one of the best films of the year, by a long shot.

Mank is now available on Netflix.