The Man Who Invented Christmas (Review)

The Man Who Invented Christmas (Review) 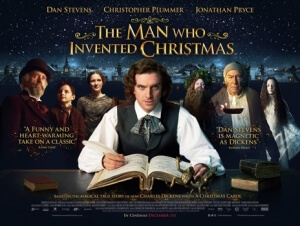 BASICALLY…: Charles Dickens (Stevens) comes up with the story and characters for his most famous book, a little festive ditty known as A Christmas Carol…

Christmas is fast approaching, and so are the endless repeats of several Christmas classics either on TV or on your own DVD player. Among them, surely, is whichever version of A Christmas Carol you have deemed to be the very best (my personal go-to one is The Muppet Christmas Carol) and have made your own annual tradition to watch all the way through; so the desire for a brand-new version of the timeless Charles Dickens story on-screen is all but undesirable, simply because there are so many already to choose from.

It starts out in 1843, when Charles Dickens (Dan Stevens) is in a bit of a rut; his last few books have flopped, and he is put under a bit of pressure to come up with a new story to keep both his family afloat and his business ties secure. Inspiration soon comes to him, though, and he thinks up a story about an old miser who, one Christmas Eve, is visited by three spirits who show him the error of his ways. He thinks it’s a good idea, but his publishers are less keen – especially since Christmas is only mere weeks away and it would be a near-impossibility to even get it printed by then – so Dickens decides to publish it himself, and tries to complete the first manuscript on time. However, even that is further complicated by the unwanted arrival of Dickens’ estranged father John (Jonathan Pryce), as well as the imagined presence of several characters from the story, including Ebenezer Scrooge (Christopher Plummer).

It’s an interesting set-up, one that allows for a bit of insight into the deeper meanings behind the story of A Christmas Carol and its many fictional characters, and also how Dickens’ own personal life factors into it more than one may have previously thought. Throughout the film, we see Dickens certainly engaging in bouncy behaviour and being a fairly out-going person, but there are also a great many other moments where he can be selfish, callous and dismissive of several people around him, including even his own family. As the imagined version of Scrooge pops up beside him every now and then, Dickens – and by extension the audience – is constantly reminded that the inspiration for his character comes from a far deeper place than even he would like to think, and it paves the way for some interesting backstory for the author which many audiences probably won’t know too much about. The film serves as a fairly light-hearted but certainly interesting study of how his greatest achievement came from him examining his own faults, and just like Scrooge in the final few pages of the story he sets out to atone for his flaws in the only way he knows how: by writing them in a small work of fiction.

This unique take on a story everybody knows is a likable romp, particularly thanks to Stevens who embodies the role of Dickens like a bouncy pantomime actor and somehow makes it work to his and the audience’s benefit. However, it does tend to overdo it a bit on the traditional clichés of writer biopics; several nods to A Christmas Carol and many other Dickens stories pop up every now and then, some of them done fairly naturally – Dickens’ nephew, along with his crutch and undisclosed illness, eerily resembles that of Tiny Tim – and others done in painfully forced manners – a character he meets near the end says his name is Copperfield, which of course sparks a moment of awed inspiration from Dickens – so they can be annoyingly corny in their execution.

Right now, I don’t think this will exactly have the lasting power it needs to become a new Christmas classic, but at the very least The Man Who Invented Christmas is an interesting spin on the classic story, by focusing more on its origin and showing how its author was far more connected to its characters and messages before he even put pen to paper.

The Man Who Invented Christmas is a likable spin on the classic story of A Christmas Carol, with the focus on its origins and Charles Dickens’ inspirations providing an interesting, though sometimes corny, insight into its messages and characters.