Malignant (Review) – James Wan’s Latest Is Bonkers As They Come 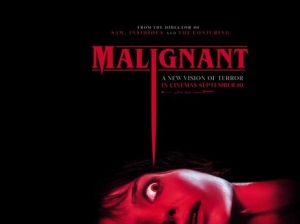 BASICALLY…: A troubled woman (Wallis) experiences grisly visions of deadly murders, which turn out to be very real…

Like John Carpenter, Wes Craven and Tobe Hooper before him, James Wan has firmly cemented his name in horror cinema with numerous hits from the first Saw to Insidious to the Conjuring franchise. Success outside the genre, with top-grossing blockbusters Fast & Furious 7 and Aquaman, has pretty much given him autonomy in Hollywood, with his name alone now almost guaranteeing some kind of success rate with either critics and audiences. So, when he decides to make a movie as bonkers as Malignant, you can count on it having some kind of audience that’s already built-in to Wan’s reputation.

Like a number of his other films, though, Malignant is definitely going to draw some attention from audiences. Even though it’s perhaps not as scary as some of his past work, it’s got a deliciously barmy premise and gorgeous giallo-baiting style that makes for some sinister over-the-top entertainment.

The film briefly opens in 1993, at what can only be described as Hogwarts if instead of a school it were a psychiatric hospital (and believe it or not, that’s not the only Harry Potter reference I’m going to drop in this review). Apparently, there’s a powerful patient named Gabriel who’s being quite acrimonious with the staff, causing the head doctor Weaver (Jacqueline McKenzie) to declare that she’s going to “cut out the cancer”. Cut to the present, when a pregnant woman named Madison (Annabelle Wallis) is knocked about by her abusive husband Derek (Jake Abel), only for him to be killed that night by a mysterious figure who soon comes after Madison, which causes her to sadly lose the baby. Shortly after, though, Madison begins having vivid dreams where she witnesses the same figure killing a number of people, which she later discovers are visions of actual murders being committed. As the visions become more extreme, Madison is forced to venture into her forgotten past and uncover her true connection to Gabriel, which leads to some shocking – and extremely gory – results.

As mentioned, Malignant isn’t quite as scary as many of James Wan’s other films. The scares are more or less just there, some of which come with decent build-up, and others which arrive exactly when you expect them to (probably because a number of them, at least some of the more visually interesting ones, are featured heavily in the trailer). It’s also one of those horror movies which relies heavily on people willingly venturing slowly into darkened rooms whenever they hear a sound, even though all the signs are telling them to stay as far away as they can. It’s still a well-made film, with Michael Burgess’ cinematography in particular standing out with its spooky blood-red and pale-blue colouring, and of course Wan’s direction is solid as ever, but the script by Akela Cooper – from a story that she and Wan co-wrote with actress Ingrid Bisu, who also has a small role in the film – comes up short in delivering the same level of scares that Wan’s horrors have been known to contain.

At least, for its first two-thirds. For most of the first and second acts, the movie plods along neatly enough, seemingly as this hybrid of supernatural chiller and procedural detective thriller (the film’s sub-plot focuses on a couple of detectives trying to solve the new strand of murders, and how Madison connects to all of them) which has some creepy moments but nothing too out of the ordinary, and a mystery that’s not too hard to pin together. But then, as the third act creeps in, the other shoe drops – and hard. Part of the fun is watching unfold the truth behind everything, so I won’t give it away here, only to joke that – and here’s where the other Harry Potter reference comes in – Professor Quirrell’s backstory is dark as hell (if you’ve just come from watching the film, you’ll know exactly what I mean by that).

Jokes aside, though, the third act of Malignant gets absolutely crazy, containing perhaps the bloodiest showcase of gore in Wan’s filmography (and, again, this is the guy who directed the first Saw film), with creepy practical effects and intricate stunt work that shows what the filmmaker has taken from his experience with action blockbusters. It’s a climax that goes all out in everything from the gore to the acting to the cinematography, with even the writing becoming a lot more on-the-nose and silly to match its new, highly infectious tone. By the end, though, you’re still left wanting answers to a number of questions – the killer’s superhuman abilities, which include manipulating electricity and broadcasting its voice via radio waves, is left completely unexplained – but there’s so much to unironically (or maybe even ironically) enjoy about how batshit this third act gets, that most of its inconsistencies are momentarily forgotten because it’s just too fun to poke holes through.

It’s a pretty eye-opening payoff to a decent, though not especially scary, horror movie from a master genre filmmaker. While Malignant probably isn’t his best film, it’s by far the craziest, especially with that insane third act, which for a guy who has made movies with creepy dolls, spirit worlds, cars jumping from one skyscraper to another, and a Julie Andrews-voiced leviathan, is a whole new level of crazy that you need to see to believe.

Malignant is a decent new horror entry from James Wan, which isn’t quite as scary as some of his other films, but is still well-made with excellent cinematography and solid direction, and is worth it for an absolutely bonkers climax that ranks among Wan’s craziest movie moments.

Malignant is now showing in cinemas nationwide – click here to find a screening near you!