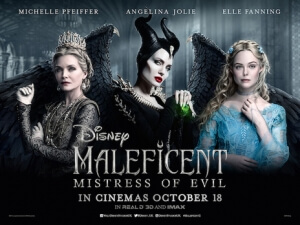 BASICALLY…: Maleficent (Jolie) ignites a war between humans and fairies, which puts her at odds with her goddaughter Princess Aurora (Fanning)…

Before we begin, I feel like I need to put in my two cents about the current trend of Disney live-action remakes.

There are loads of people that enjoy revisiting some of the studio’s classic stories, there are others who despise them for the cynical, soulless cash-grabs they believe them to be, and then there are some who have no strong feelings about them one way or the other. Personally, I am one of those people from the latter camp; although there are genuinely strong exceptions, such as The Jungle Book and Mary Poppins Returns, I just can’t get that passionate about them because the majority of these films just go in one ear and out the other, and they’re not good enough to recommend nor are they bad enough to get truly mad about. My point is, whatever you feel about these movies, know that you are completely within your rights to enjoy them, hate them, or feel indifferent towards them, and if anyone gives you trouble or puts you down for having an opinion that they don’t agree with you on – I have seen people call others “zombies” or “sheep” for paying to see these films – then those people are really not worth your time of day. I implore each and every one of you who reads this review, as well as the ones for other recent Disney remakes, to be kind and respectful to each other about your opinions on these movies; you don’t have to agree with each other, but you shouldn’t be mean or disrespectful either, especially when it’s concerning something which, when you take into account the larger picture, doesn’t even matter all that much. So please, be kind, be understanding, and be patient as we wait for this trend, regardless of your opinions for these movies, to finally be phased out.

Now that I’ve gotten all of that out of the way, let’s talk about Maleficent: Mistress of Evil, and how it’s just another one of these movies that comes and goes without leaving too much of an impact.

Taking place a few years after the events of the first film, which was a different take on Disney’s classic Sleeping Beauty, the eponymous beauty herself – Princess Aurora (Elle Fanning), now Queen of the Moors – accepts the proposal of her love Prince Phillip (Harris Dickinson) to wed and unite their two kingdoms. However, Aurora’s godmother – the feared witch Maleficent (Angelina Jolie) – is not too pleased with the unity, especially after an awkward dinner with Phillip’s parents, particularly his cold-hearted mother Queen Ingrith (Michelle Pfeiffer), ends with war effectively being declared. Now, both Maleficent and Aurora find themselves on two opposing sides, with Maleficent becoming acquainted with long-lost members of her own species, and Aurora slowly discovering her impending mother-in-law’s more treacherous plans for the magical fairies of the forest.

It’s been since it first came out that I saw the first Maleficent film, and from what I remember it was pretty much the same feeling that I have towards this film, in that it’s visually pleasing to look at, but is an otherwise uninteresting and rather bland take on the material. This film plays certain cards early on, such as who the real villain of the story is (as though it really needed to be a surprise), which on the one hand leaves you thankful that they’re not waiting until later on to reveal something we already know is coming, but on the other hand there’s not a lot left that’s really interesting enough to carry itself. The characters and their actions often make little sense, the story is largely lost in the mix, the effects aren’t very good – and ironically look more cartoony than the cartoon that both these movies were based on – and not even the acting can save it; despite committed turns from the likes of Angelina Jolie and Elle Fanning, other actors like Michelle Pfeiffer, Chiwetel Ejiofor, Ed Skrein, and especially Harris Dickinson (replacing Brenton Thwaites from the previous film) are stuck with roles that only exist to either provide exposition, or just be wooden planks. It’s just not a particularly interesting movie; it’s certainly ambitious, in the sense that the visuals and set designs can be striking at times, as well as the fact that it’s doing something a little different rather than just being another rendition of Sleeping Beauty, but not very interesting.

Things only start to pick up much later on, during a climax that gets surprisingly brutal as Disney movies go. Imagine if the House of Mouse made their own version of the notoriously destructive climax from Man of Steel, and you kind of get a sense of what kind of madness the movie gets itself into; it’s loud, bombastic, and it’s got a shockingly large body count when you really think about what’s going on. Obviously I’ll refrain from giving too much information in case you’re still eager to see it, but be prepared for how shockingly dark this movie gets in the last third.

In the end, though, it just didn’t do it for me, and it’s another one of those Disney remakes that left absolutely no impact on me whatsoever. However, if you see the movie and end up enjoying it, I am truly happy that you did; as I said earlier, don’t let anybody ever prevent you from liking what you like, and those that do are even bigger villains than Maleficent herself.

Maleficent: Mistress of Evil is another forgettable live-action Disney remake that’s too bland to stir up any kind of real emotion towards it, despite the occasional inspired visual and a couple of committed turns by Angelina Jolie and Elle Fanning, as well as a pretty hardcore climax in which things get surprisingly gruesome.

Want to decide what the movie’s like for yourself?
Check out Maleficent: Mistress of Evil showtimes in London
via