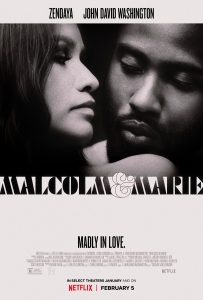 BASICALLY…: After returning home from a movie premiere, a couple (Washington and Zendaya) find their love tested over one evening…

“Hell hath no fury like a woman scorned,” so the centuries-old saying goes. It’s a thought that surely went through the mind of filmmaker Sam Levinson when, during the premiere of his 2018 film Assassination Nation, he forgot to thank his wife, producer Ashley Levinson, during the long list of names before the film actually began.

While in reality, the Levinsons quickly brushed off the slight and got on with their lives, the idea of a much bigger argument sprouting from that one slip-up clearly stayed in the director’s mind ever since. All it took was for a global pandemic to turn that thought into a reality.

Shot over two weeks in LA during last summer’s city-wide lockdown, and with strict safety measures in place for its limited cast and crew, Malcolm & Marie is an impressive feat when you absorb that information about its scaled-down production, and the film itself has further strengths in its strongly-worded dialogue, luscious black-and-white 35mm cinematography, and two fantastic central performances. That being said, it’s also a movie that is certain to rub some people the wrong way, and I’d be lying if I said that I didn’t understand why.

The film, similar to the real-life inspiration, sees filmmaker Malcolm (John David Washington) and his younger muse Marie (Zendaya) returning home after a lavish premiere for his latest film, which we learn has been warmly received by audiences, although professional critics have yet to chime in. While he’s initially ecstatic about the strong reception, she’s less than pleased that he left her name off his list of thank-yous, which quickly escalates into a full-blown shouting battle between the two, where each of them constantly try to one-up the other in order to win what seems to be a never-ending argument about their relationship as a whole.

If you’ve had a chance to watch Levinson’s provocative HBO teen drama Euphoria (also featuring Zendaya, in a historic Emmy-winning performance), then you’ll quickly pick up on his sly penchant for dialogue and stylish direction, and while there’s less of the latter and much more of the former in Malcolm & Marie, Levinson imbues a smart, sophisticated understanding of his characters and the fields in which they – and by extension, he – operate in. Essentially a collection of monologues, albeit some powerfully worded ones, the film pulls no punches when it comes to particular hypocrisies in Hollywood, from rich movie stars discussing socialism in interviews, to most notably the elite of powerful white movie critics who try to find deeper meaning in a black artist’s work when there’s really none to be found. Levinson’s script is not afraid to call out these flaws in the liberal film industry, although sometimes it can be pretty heavy-handed in its approach; however, he has a firm enough grip on delivering compelling and passionate dialogue that he still makes it very enjoyable to at the very least listen to.

He also makes it a visually pleasing movie to watch, with some sweet black-and-white cinematography illuminating each and every scene inside and outside this rather nice house where we spend practically the entire movie. Julio C. Perez IV’s delicate 35mm lensing is to thank for the film’s crisp, smooth and even sexy look, which Levinson seems to be fully aware of since he uses every chance he gets to show an actor, a prop, or the outdoor silhouettes through his cinematographer’s keen eye. It is a gorgeously shot movie, and thinking about how they were able to get such intimate close-up shots when filming in the middle of a pandemic makes it a little more risqué and daring in this current age of COVID-19.

Then, there are the two sole performers in the movie, who to say that they give it all that they’ve got would be to undermine their actual on-screen power. John David Washington, ever the charismatic leading man as seen previously in BlacKkKlansman and Tenet, is simply marvellous here, displaying a certain level of arrogance that’s charming enough for you to understand why anyone, let alone his long-suffering other half, would put up with his BS on a daily basis, but when he taps into his character’s more vulnerable side, he’s a different animal entirely, filled with both anger and pathos. Nowhere is that more evident than in a lengthy monologue where he truly lets loose in response to a review for his film (albeit a positive one) that he feels misses the point entirely, which is not just funny but also indicative of the actor’s fierce emotional range. Zendaya, equally or perhaps even more so, embodies a much more fragile perspective, and the more we learn about Marie and her own tragic past – as well as how much it may have inspired the film that they’ve just gotten back from the premiere of – the more we realise that her insecurities are not just limited to her beau forgetting her own name in a speech, which present us with a deeply effective character study that the actress beautifully conveys with strong inflictions and sharp deliveries. The two of them, whether they’re fighting or intimate with one another, share an on-screen chemistry that’s difficult to shake off, and individually bring to life Levinson’s script with incredible ease and sophistication.

Though the film as a whole has many commendable qualities, there are aspects which are hard to overlook that often threaten to derail its confident streak. The film had a rocky pre-release buzz, with some early critics responding warmly enough while others were quick to condemn its apparent hatred of movie critics (especially an oft-targeted white female critic for The LA Times, assumed to be based on real-life reviewer Katie Walsh, who gave the director’s Assassination Nation a negative review for the publication), as well as its self-indulgent attributes that some viewed as pretentious and heavy-handed. Though I personally do not entirely agree with the sentiment that this film is an exercise in self-indulgence, it’s easy to see how others can come to that conclusion. Levinson’s script sometimes does all but perform fellatio on itself, but for me it’s never enough to write the film off completely, because there are still plenty of things to admire about it which just about save itself.

It’s definitely far from perfect, but as a mere showcase for its filmmaker and its two outstanding leads, Malcolm & Marie is a project you’ll be mostly thankful for.

Malcolm & Marie is a formidable chamber piece featuring some gorgeous cinematography and two outstanding lead turns by John David Washington and Zendaya, and while director Sam Levinson’s monologue-heavy script occasionally threatens to veer into self-indulgence, the dialogue is entertaining enough to keep things on track.