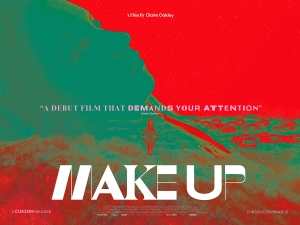 BASICALLY…: Whilst staying with her boyfriend on a caravan park in Cornwall, young Ruth (Windsor) becomes drawn into obsession when she suspects he has cheated on her…

Claire Oakley’s debut feature film Make Up is a strange film to define. It at first sets itself up as though it’s going to be a light horror with cinematography and characters straight out of a Blumhouse film, only to then identify as an intense coming-of-age drama/romance, before also revealing it has strong surrealist vibes in the same category as David Lynch.

What exactly the movie is trying to be, I’m not entirely sure. However, it is a compliment to the film as a whole that I was intrigued enough to see it through to the bitter end, and find out what identity the movie is going for after all.

We begin as a teenager named Ruth (Molly Windsor) arrives at a Cornwall caravan park in the middle of the night; she’s arrived to spend time with her long-term boyfriend Tom (Joseph Quinn), who works on-site. While at first the two young lovers seem to be enjoying each other’s company, it isn’t long before Tom starts to become more distant. To make matters more complicated, Ruth finds a strand of red hair on one of Tom’s t-shirts; suspecting that she is being cheated on, she sets out to uncover the mystery herself, eventually finding herself becoming more and more fixated on a woman named Jade (Stefanie Martini), another on-site worker who makes wigs out of real human hair (including, suspiciously, a red-haired wig). Ruth’s suspicion soon turns into something greater, and it isn’t long at all until she starts questioning everything she holds dear, from her relationship with Tom to her own sanity.

Right off the bat, I’ll say that this isn’t the kind of movie that gives easy answers to a lot of things. Who is the red-haired girl that Tom may or may not have been fooling around with? Is she a mere figment of Ruth’s increasingly unbalanced psyche? Why does the senile old woman next door look like she’s about to fly into an unprovoked stabbing frenzy? It’s unlikely you’ll leave knowing more than you did going in, but that’s okay; part of what makes Oakley’s film incredibly fascinating is its ability to remain vague about a lot of things, including what kind of overall tone it is going for, because it makes the whole thing very difficult to predict. You genuinely have no idea where any of this is leading to, especially as the film touches upon some bizarre moments of surrealism where you’re half-expecting Molly Windsor’s character to suddenly wander into the Red Room from Twin Peaks. The movie never gets as insane as that, but it does leave you so perplexed by the odd turns it is taking that by the time it does finally reveal its true colours, you’re grateful for this journey being as captivating as it was.

In contrast to what Oakley keeps close to her chest in terms of plot and overall identity, she reveals a full set of tension-building filmmaking skills that help move things along briskly. Not since last year’s Bait has Cornwall seemed to have such a doom-and-gloom atmosphere to it; grey skies loom over a sea of ugly caravan homes by the loud and bombastic waves, populated by local eccentrics from a landlady with a demonic laugh to an 11-year-old girl who likes to help around to a rather unpleasant dog-wielding worker who makes crude remarks about Ruth’s privates. If this isn’t a horror film, which – mild spoiler – it isn’t, then it’s doing a good job of feeling like one, in how Oakley frames scenes of this small community as though, at any moment, they’re about to reveal some deadly pagan traditions. Instead, Oakley channels her energy into making Ruth’s journey from an insecure and possibly scorned lover into a more confident and self-assured woman feel like an uneasy, but ultimately meaningful transition, with Molly Windsor giving a quietly powerful performance as she wrestles with her own emotions in ways nobody, least of all her, could possibly have predicted.

It is sometimes frustrating when the movie can’t seem to decide on a particular identity for itself, because it does leave you wondering for most of it what exactly it is going for in terms of tone and theme, and the loose ends it leaves as the end credits start rolling are numerous to count, which might not make for a satisfying experience for many. However, it’s about the journey and not the destination, and Oakley has made a film that leaves you guessing right up until the final few moments, in ways that make a lot of it feel vastly unpredictable compared to a lot of other dark dramas just like it. While I wouldn’t say I enjoyed it as much as something like Lady Macbeth, which had much more of an understanding of what it really was and felt like much more of a thrill ride, Make Up is a strong debut for Oakley who, in one feature, has set herself up as an intriguing storyteller who uses lots of fascinating tonal cues and descents into surrealism to make her voice known.

It probably won’t sit well with everyone, but it’s a pretty impressive movie for the thoughtful and open-minded.

Make Up is a fascinating debut feature from writer-director Claire Oakley, who uses multiple tones and the occasional descent into surrealism to establish an identity that doesn’t always feel satisfying, but leaves you fully engrossed right up until the very end, which Molly Windsor’s quietly strong lead performance helps to solidify.

Want to decide what the movie’s like for yourself?
Check out Make Up showtimes in London
via