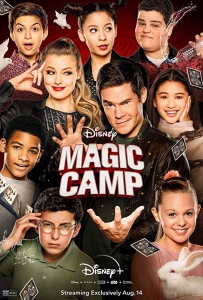 BASICALLY…: Andy (DeVine) is persuaded to return to the magic-themed camp of his youth as a counsellor, with the hopes of revitalising his career…

The longer a movie sticks around in release date hell, the greater its chances are of being a complete dud. Of course, there are exceptions to this – The Cabin in the Woods got released two years after its original release date, while Kenneth Lonergan’s underrated Margaret spent six years on the shelves, and of course we’re still actively rooting for The New Mutants, which has been pushed back more times than this film has – but there is always trepidation when a film that was shot more than a few years ago all of a sudden gets dumped quietly into cinemas or streaming services.

Magic Camp, which was shot in early 2017 and originally scheduled for a summer 2018 theatrical release, before being removed from the schedule in favour of a Disney+ launch two years later, was almost certain to meet a dismal fate, especially when there wasn’t even a poster or a trailer for the thing until mere days before its launch (even Artemis Fowl, a far worse movie than this one, had some kind of promotional material before its debut). Yet, for all of Disney’s attempts to try and bury this one, it’s weird that the final result isn’t terrible; not a new classic by any stretch of the imagination, but far more tolerable and even a lot sweeter than it has any right to be.

The movie takes place at the Institute of Magic, a summer camp for budding young magicians run by the eccentric Roy Preston (Jeffrey Tambor). There, they work on their magic skills to compete at an end-of-camp showcase where a lucky winner will receive the special prize of a golden wand. One of the counsellors for this summer’s event is Andy (Adam DeVine), a former golden wand winner who now drives a taxi in Las Vegas, and who is invited to the camp by Preston with the hopes of reigniting his career. Also serving as a counsellor is Andy’s former partner Kristina (Gillian Jacobs), who has since made it big as a famous magician in her own right. Determined to beat Kristina and her young protégées, Andy assembles his own ragtag team of misfits to find their hidden magical talents and blow everyone away at the competition.

To say it’s a formulaic movie is beyond an understatement; it’s essentially The Mighty Ducks except with card tricks instead of hockey. There’s no point in even going further into the rest of the plot, because you’ve already seen it in many, many films like it; hardly anything is new or given a fresh spin on, you know each and every arc that the characters embark upon, and it’s likely you’ve guessed the ending before I’ve even had the opportunity to hint at it for you. Make no mistake, it just IS one of those movies, particularly the kind that would have come out around the late 90s or early 2000s if the script had been written around that time (and it probably might have been, seeing how there are six credited writers on this movie).

Is that a bad thing, though? It might be for anyone hoping for something that gives a new twist on an age-old formula, and most others might not even care that much. As for me, for someone who went into this fully expecting this film to be exactly the kind of lame Disney Channel movie that somehow worked its way into feature-length territory, I was pleasantly surprised by this film; again, it’s definitely got some lame and cheesy parts to it, and the familiar formula is hard to ignore, but I will admit there is a decent sense of heart to it. Most of the characters are pretty likeable, as paper-thin and cliché as a lot of them are (there’s the nerdy one with numerous allergies, there’s the sullen deadpan one, and there’s even 90s kids movie bullies), and the magic tricks themselves – which were apparently done for real on set by the young actors themselves, who were taught the numerous tricks by several professional magicians during pre-production – are fun to watch. Even Adam DeVine, who admittedly sometimes gets on my nerves, is tolerable in this film, severely toning down his obnoxious persona previously seen in films like Pitch Perfect and Mike and Dave Need Wedding Dates, and instead going for something that’s clearly aping Jack Black’s performance in School of Rock, but it’s much more welcome than most of the other stuff I’ve seen him do.

It’s got a good heart, some nice messages about self-confidence, and even some pleasant moments of slapstick which looks like the cast had plenty of fun working on it. All in all, the movie is fine and completely harmless, which is far more than I was expecting for a film that I had expected to not be on board with at all. I’m a little perplexed as to why it had been delayed for so long – though given the inclusion of Jeffrey Tambor, who has since seen some serious allegations made against him, I think I may partly know why – because this isn’t a movie to be all that ashamed of; something like Artemis Fowl is a thousand times worse than this film is, yet Magic Camp was the one that got a quiet dumping onto Disney+ (and yes, I know Artemis Fowl had a much bigger budget than this, and that it was originally going to be released theatrically, but there are effects in this film that are done practically which are far more impressive than anything in that big-budget CGI fiasco). This one is by far the better option for families to watch on the streaming service (between those two, at least), and while it isn’t great it’s got just enough of a magic spark to stop itself from being at all bad.

Magic Camp is a harmless family comedy that’s extremely formulaic – think The Mighty Ducks, except with card tricks instead of hockey – but its warm heart, a bunch of likeable characters, and some impressive practical effects make it a surprisingly decent movie to put on for the kids.

Want to decide what the movie’s like for yourself?
Check out Magic Camp streaming links
via