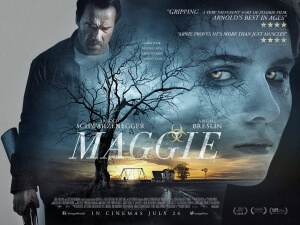 BASICALLY…: During a worldwide zombie epidemic, a father (Schwarzenegger) cares for his infected daughter Maggie (Breslin) as he prepares for the inevitable…

We might be sick to death of them by now (no pun intended), but zombies still tend to be a popular subject in pop culture – so much so, in fact, that filmmakers are going out of their way to find new angles on them to create a new and powerful viewing experience. Whether it’s the digitalised home-made look of Danny Boyle’s 28 Days Later or the long-form exploration of humanity in The Walking Dead, there are new takes on the sub-genre that are – ironically – giving it new leases of life.

One of the latest attempts to do something new with the zombie craze is Maggie, the directorial debut of title designer Henry Hobson which takes one of the sub-genre’s most famous tropes – the initial transformation from human to flesh-eating monster – and bases an entire movie around just that. In retrospect, this idea has been done before in other media – there was even a recent episode of The Walking Dead that pulled this off – but Maggie will perhaps stand out as being a much more sombre tale of loss and choice within a family unit.

Abigail Breslin is the Maggie of the title, a teenage girl who ends up being bitten in the middle of a worldwide zombie epidemic, and is brought home by her loving father Wade (Arnold Schwarzenegger) to live out her final days as a human. As Maggie begins to show more of the symptoms that she is turning, Wade is faced with the heart-breaking choice of what to do when the moment finally comes.

As you may have guessed, this is a very quiet affair with the focus mainly being on the connection between father and daughter instead of actually showing the world around them. In a ballsy move, especially in a film with Schwarzenegger as one of the stars, other actual zombies are rarely seen and we only get glimpses of the collapse of society, such as an abandoned gas station or fields of crops set ablaze by their worried farmers. Hobson wisely avoids showing us the rest of the world as much as he can, since it probably won’t have been much different to every other post-apocalyptic wasteland that has been seen in countless other zombie movies, and by keeping the focus contained to these particular characters and settings he creates an effective glimpse of a worldwide panic by only showing its effects in a smaller community. If things are this bad here, then God only knows how it is in other parts of the country, or other countries.

Unlike other zombie movies, the transformation itself takes an abnormally long time to take effect (then again, if it were as instantaneous as, say, 28 Days Later, then we wouldn’t have a movie) which allows for various vignettes and sequences to develop the relationships and situations. Some will understandably be put off by the film’s slow-burner pacing, but it allows for some intriguing and interesting ideas to be explored – a small section in the first half sees a neighbour confronting Wade about his decision to axe off zombified members of her own family, one of which was a four-year-old girl, and eventually reflect on her own decision to keep them away from a law-induced quarantine; it’s an undeniably effective little diversion, and serves to reinforce the themes of family and sacrifice that the rest of the film offers. The pacing also allows the characters to breathe and just be people rather than walking exposition dumps; in one of many of their bonding scenes, Maggie and Wade talk about the books that her late mother used to read, and there’s an entire sequence where Maggie is invited out with her friends to a reservoir for a campfire-lit chilling session with a couple of other “infected” teenagers. Films like this certainly need moments of character development like this, because it makes the eventual outcome much more effective and heart-breaking.

Schwarzenegger and Breslin both deliver fine performances, with Schwarzenegger in particular giving a much more grounded and emotional performance than anything else in his post-Governator career – even though he still can’t manage to shake off his trademark Austrian accent, which is a little distracting when he’s supposed to be playing a farmer in a rural Southern state of America. The relationship between both actors is very strong, and if anything you’ll certainly feel that connection as they talk and bond, and get more upset about the inevitable conclusion (which in and of itself is unexpected, if a little anti-climactic).

As a film, it’s not perfect; Hobson certainly suffers from a lot of the traps that most first-time directors fall into, namely overusing certain gimmicks to supposedly advance the storytelling (in this case, it’s the shaky-cam business again, appearing in every scene even when it’s not required) and sometimes the film loses focus of what it should be aiming for, but overall it’s still a decent script coupled with two good lead performances and a competent-enough director that clearly has his heart in the right place, even though his technique clearly needs a bit of work.

Maggie may not be the first zombie movie to focus the majority of its running time to the initial transformation, but from the way it’s paced to allow its characters room to breathe, just try and not come out of it feeling something.

Maggie is an effective and heart-breaking zombie movie, which boasts a decent script and two strong performances from Arnold Schwarzenegger and Abigail Breslin, and although some will be put off by its slow pace, others will appreciate it for giving its characters room to breathe and make the inevitable outcome all the more bleak.