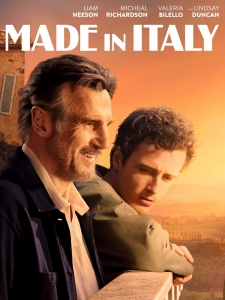 BASICALLY…: A widowed dad (Neeson) and his estranged son (Richardson) head to Tuscany in order to renovate and sell their family villa…

It certainly isn’t uncommon for a Hollywood parent to act opposite their offspring in a movie, but for Liam Neeson and his actor son Micheál Richardson, their first proper on-screen pairing – not including the very brief screen-time they shared in 2019’s Cold Pursuit, where the latter played Neeson’s dead son – comes with an enormous therapy bill. That’s because Made in Italy draws many parallels with the grief they undoubtedly experienced when wife/mother Natasha Richardson was very tragically killed in a skiing accident back in 2009, and in writer-director James D’Arcy’s filmmaking debut the pair have been able to tap into their greatest sorrows surrounding their devastating loss, within a narrative that allows them to grieve as well as deliver some solid performances.

Seeing both father and son go through their emotional difficulties in front of us can perhaps be a case of TMI, but Made in Italy is lucky that it’s got a couple of likeable enough leads to warrant such heavy displays of affection and sorrow, because otherwise it’s a film you’ll struggle to remember afterwards.

Neeson is London artist Robert, and Richardson is his directionless son Jack; neither are on great terms, following a strained childhood following the death of Raffaella, Robert’s wife and Jack’s mother. However, when Jack becomes eager to buy an art gallery that belongs to the family of his ex-wife, he decides to put his family’s villa in Tuscany up for sale, and begrudgingly brings his estranged father along to help fix up the place. Unfortunately, when they get there, they realise that the villa is in much worse condition than they had thought, since neither had visited for twenty years since Raffaella’s death, and so the grand renovation begins where, naturally, both father and son rediscover the joys and wonders of the villa, the surrounding Italian village and its inhabitants, and of course their fractured relationship.

It’s a movie where you can easily predict all the twists and turns, and spot the clichés coming from miles off in the distance – some of which are introduced only to go nowhere – but D’Arcy’s script isn’t really fussed about any of that, because even it knows that the real reason people are showing interest in this movie is just to see Liam Neeson act opposite his actual son, and if nothing else the movie certainly delivers on that promise. Both Neeson and Richardson turn in some very fine performances here, obviously working from their own grief in scenes where their characters express exactly that, and together they have some decent chemistry during lighter moments where they’re not bickering or being endlessly annoyed with each other (they have arguments about everything from Tinder to hentai – yes, really). Neeson looks like he’s relieved to be spending time in this sunny Italian location after an onslaught of middle-of-the-road action thrillers like the recent Honest Thief, and easily turns on the charisma as the more sociable of the main duo; Richardson, meanwhile, displays some strong leading-man qualities about him, clearly taking after not just his father but also his late mother in terms of his on-screen charm, which should leave both of them proud of their hard-working son.

Ultimately, though, it is a film that is sadly destined to be forgotten by audiences shortly after watching it. D’Arcy’s script and direction, while competent and at times lively, does fall into genericism a number of times, from a whirlwind romance with local restaurant owner Natalia (Valeria Bilello) that slowly becomes an afterthought, to the numerous quarrels and make-ups and more quarrels that both father and son have to repeatedly share with each other, which often lack weight because, again, it’s such a formulaic story that you already know what’s going to happen by the end. There really isn’t much about it that truly stands out, aside from the central pairing of Liam Neeson and son, and even then while the pair certainly liven up some of the more treacly dialogue D’Arcy’s script has to offer, it’s far from the most memorable film or performance in either of their careers.

While Made in Italy is definitely amiable viewing in the moment, best suited for the slightly older crowd that’s still pining for a holiday in the Italian sun (as soon as the rest of Europe gets itself together), its long-term chances of sticking around in the mind are sadly as flimsy as store-brand Italian-style pizza. You’ll get what you came for if all you want is to see Liam Neeson and his son act opposite one another, but beyond that there’s very little chance you’ll even remember they acted in this.

Made in Italy makes good on its promise of having both Lian Neeson and real-life son Micheál Richardson act opposite one another, in a pair of solid turns where they tap into their actual grief and sorrow, but the film around them is too generic and forgettable to leave much of a lasting impression.

Made in Italy is now available on Amazon Prime Video.